With the first week behind us, we will now turn to a thrilling second week of MHSAA football. Still curious about last week? Check out our Recaps, Power Poll, Standings, and Core Power Performance Players of the Week.

Now onto Week 2, where we have fifteen games LIVE this Friday night. A brief preview of these games:

Caledonia (1-0) vs Rockford (1-0): A battle of unbeatens in the OK Red takes place at Ralph E Meyers Memorial Stadium in Caledonia. The Scots toppled West Ottawa last week with an impressive display of offense by Carson VanderHoff and Mason Mackenzie. They will face a tougher defense this week, as Rockford allowed just thirteen points to Jenison. The Rams needed an extra frame to defeat the Wildcats, but a touchdown by Zak Ahern led them to victory. Rockford has won the last five in this series, but Caledonia nearly won a season ago. Caledonia fans certainly cannot forget their last win in this series, a 42-0 stunner back in 2014.

East Kentwood (0-1) v Grandville (1-0): The Falcons will look for their first win of the season when they take on Grandville. East Kentwood put up a good fight against Hudsonville last week, but they fell a touchdown short. Grandville’s offense exploded last week in a 62-18 win over Grand Haven. The two-headed rushing attack of Cam Terry and Marcel Love will pose a tall task for the Falcons’ defense. In 2019, Grandville defeated East Kentwood 22-21 in a thrilling football game.

Hudsonville (1-0) v Grand Haven (0-1): The Hudsonville Eagles won their season opener against East Kentwood, and they will look to improve to 2-0 with a match-up against Grand Haven. The Bucs are reeling after giving up 62 points in their season opener against Grandville. In this series, Hudsonville has won nine in a row, including two victories a season ago (33-0 in the regular season and 35-7 in the District Finals).

Jenison (0-1) v West Ottawa (0-1): One of these two OK Red schools will get their first win on Friday night. Jenison just narrowly lost to Rockford, a game in which they led until the closing moments of regulation before falling in overtime. Their defense will face a stern challenge from the passing attack of West Ottawa. Although they lost to Caledonia, West Ottawa showed their passing strength last week. Jake Zimmer passed for over 300 yards, and seventeen completions were to Blake Bosma. Bosma turned those catches into 210 yards and four touchdowns. In their last meeting back in 2017, West Ottawa defeated Jenison 48-14 to extend their streak back to nine games dating back to their OK Red days.

Tri-County (0-1) v Newaygo (1-0): The Tri-County Vikings will look to avenge their narrow Week 1 defeat against Grant with a win in their match-up against Newaygo in Week 2. Newaygo had a bit of a scare against Fremont in the first half, but a strong second half performance by Brenden Brechting carried them to that victory. Brechting was a Core Power Performance Impact Player of the Week, and he will look to help the Lions win their eighth straight game in this series. Last year, it was a 28-14 contest.

Coopersville (0-1) v Spring Lake (0-1): Both the Broncos and the Lakers will be looking for their first win of 2020 in the second game of the year. Coopersville struggled to get going against West Catholic, while Spring Lake fell a couple scores short against Unity Christian. Last season, Spring Lake shut out Coopersville 34-0. This was their second straight win in the series, and their third in the last four years.

West Catholic v Unity Christian: Two 1-0 teams and recent State Champions square off in Week 2. After taking down Coopersville in Week 1, West Catholic will look to surpass their 2019 win total this week. Unity Christian defeated Spring Lake 29-12, and their team looks poised to make another deep postseason run this fall. These teams last met in the first round of the 2018 playoffs, when Unity topped West Catholic 41-22 on their way to a State Championship.

South Christian (1-0) v Forest Hills Eastern (1-0): Two OK Gold teams that started their season with victories will square off in the second week of the season. South Christian defeated Kenowa Hills 25-15, while Forest Hills Eastern got the best of Ottawa Hills in a 38-12 win. The Sailors had stellar play from Ty Rynbrandt, as he threw for 215 yards to stimulate the offense. He will be looked on to call the shots once again to deliver South Christian’s fifth straight win in the series against the Hawks.

East Grand Rapids (0-1) v Greenville (0-1): The Pioneers were stunned by Lowell in their season-opener, as the Red Arrows made a statement with their dominant victory. This week, East Grand Rapids will look to rebound and get in the win column against Greenville. The ‘Jackets were defeated last week as well when Northview got a 30-12 victory. These two teams were in the OK White together from 2003-2011, and the Pioneers won all nine matchups during that span. They will look to make it ten in a row on Friday night.

Northview (1-0) v Lowell (1-0): The Northview Wildcats got a strong performance from Carter Pell to take down Greenville in Week 1. This week, they will look to improve to 2-0 when they take on the Lowell Red Arrows. Lowell announced their presence as a real contender in the area with a 20-6 win over East Grand Rapids in which Doak Dean rushed for a trio of touchdowns. Last fall, Lowell got the best of Northview in the regular season finale, 41-19, in a game that would send its winner to the postseason.

Zeeland West (1-0) v Union (0-1): After taking down Wyoming 60-20 in the opening game of the season, the Dux (ranked #9 in the Remax-United Power Poll) will look to get another victory against Union. The Red Hawks lost to Zeeland East, but they showed immense improvement from the year before. This is the first ever meeting between the two schools, who are coached by West Michigan legends. John Shillito has won four State Championships at Zeeland West, while Don Fellows won a State Championship at Grand Rapids Christian.

Swan Valley (1-0) v Frankenmuth (1-0): Swan Valley and Frankenmuth meet in a non-league battle of two teams that appear to be favorites in their respective TVC divisions. Frankenmuth bullied Freeland 41-3, while Swan Valley blanked Alma 25-0. These two teams met twice a season ago. In the regular season, Frankenmuth won 23-20 in a game that ultimately ended on Saturday after chaotic weather. When they met in the District Championship game, Swan Valley’s defense created key turnovers in a 21-7 victory.

Freeland (0-1) v Alma (0-1): The Freeland Falcons were thwarted by Frankenmuth last week in a 41-3 rout. Thankfully, due to the TVC realignment this fall, they have not played a true conference game yet. They will open their TVC-Central campaign against Alma, who was beaten by Swan Valley 25-0 a week ago. Last season, Freeland snapped a losing streak against the Panthers by winning 34-28.

Livonia Franklin (1-0) v Westland John Glenn (0-1): In their season opener, Livonia Franklin delivered a thrilling come-from-behind victory against the Tractors of Dearborn Fordson. Connor Hatfield had a fantastic day with three touchdowns in the victory. He will look to help springboard another win on Friday night against Westland John Glenn. The Rockets lost to Dearborn 42-13 last week. Franklin won this match-up in each of the past five years, including 42-7 a year ago. 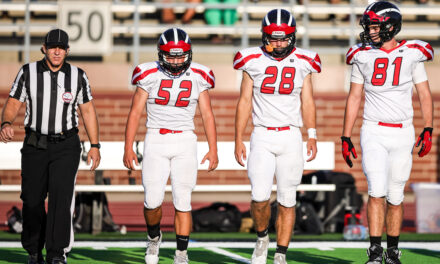 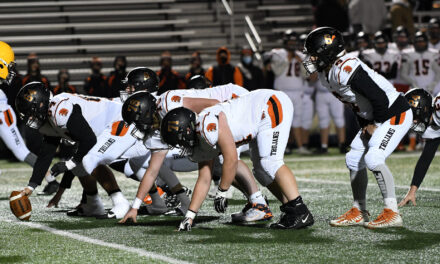