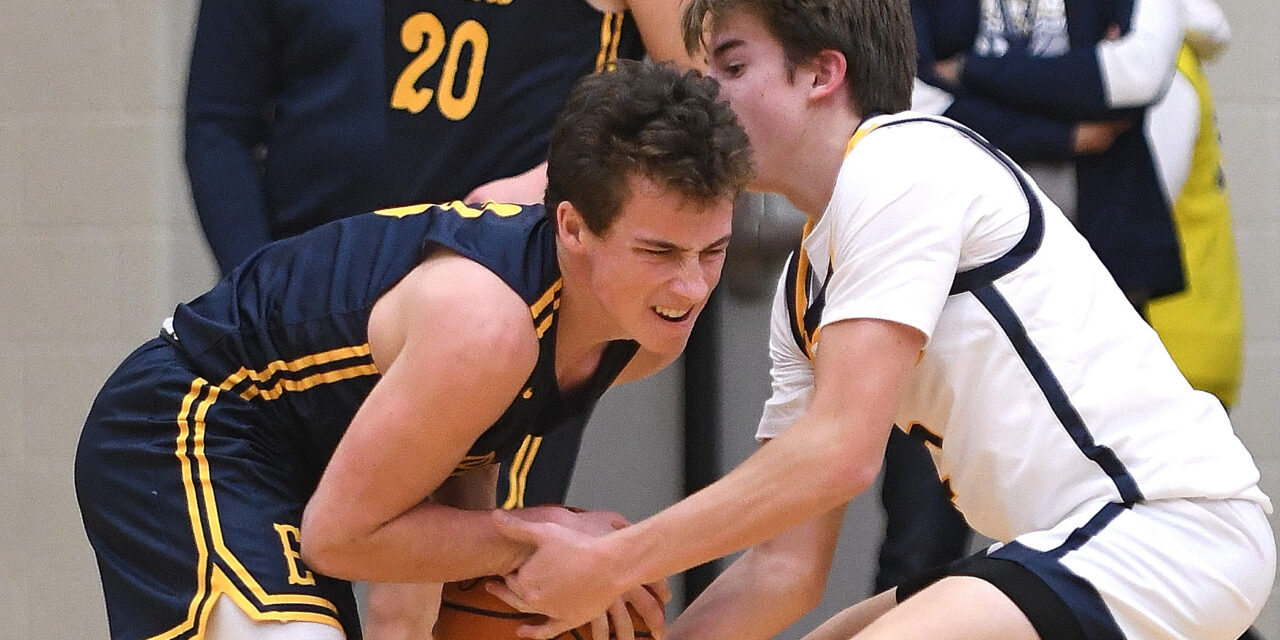 The first week of the boys basketball season rolls along with a jam-packed end of the week slate. Check out a summary of the scores from Wednesday through Friday, as well as the Saturday schedule.

Grand Rapids Sacred Heart 57 Libertas Christian 20: The Falcons went on the road to Hudsonville, returning to the City with a victory. Jack Blouw and Noah Northon each had 15 points to lead Sacred Heart, while Peter Tober (9) and Sam Blouw (8) added strong scoring efforts.

Big Rapids 62 Fremont 60: The Cardinals began CSAA-Gold play with a win over the Packers. It was close throughout, with the lead changing constantly. Blake Hanshue hit a three-pointer with three seconds left to send the game into overtime. Fremont took a 4-point lead in the extra frame, but Jordon McDonald’s fifth foul changed the momentum, allowing the Cardinals to capture the win. McDonald led Fremont with 23 points and 3 steals, while Gavin Richards chipped in 6 points and 8 rebounds.

Edwardsburg 74 Allegan 28: The Eddies had little trouble in defeating Allegan on Friday. An 18-4 first quarter advantage was followed by a 27-13 second quarter. Ahead by 28 at the break, they continued to extend their lead over the final sixteen minutes. Jacob Pegura had 16 points, Isaac Merrill chipped in 14, and Luke Stowasser had 10.

Grand Haven 61 Reeths-Puffer 56: The Bucs and the Rockets battled in a competitive non-league contest on Friday. Grand Haven got out to a 10-point halftime lead, before RP battled back in the second half, cutting it to as close as three. A strong showing at the line by Grand Haven (10/11) in the fourth quarter sealed the deal. Harrison Soerelle led GH with 25 points, while Nic Stump added 16. Jaxson Whitaker led the Rockets with 21 points and 4 assists, while Travis Ambrose finished with 11 points and 9 rebounds.

Fruitport 67 Fruitport Calvary Christian 52: The Trojans won the inner-city battle on Friday night. “It was a disappointing night, as we were bullied on the perimeter,” FCC Coach Brad Richards shared. “When you turn the ball over 24 times and miss 15 free throws, it’s really hard to win a basketball game.” The Eagles were within seven in the fourth quarter, but Fruitport pulled away late. Bode Anspach led Fruitport with 16 points, while Andrew Spyke (14), Paschal Jolman (12) and Ryan Laus (10) each scored in double digits. Bradley Richards paced FCC with 24 points and 20 rebounds. Jacob May added 13 points and 7 assists, while Ethan Cammenga collected 10 rebounds.

GR Catholic Central 48 GR Christian 45: The Cougars began their season on the road, against a tough Eagles crew. Eric Taylor’s GR Christian team led 9-0 early, and 32-11 midway through the second quarter. GRCC rallied and held the Eagles to just ten points, allowing the Cougars to take their first lead at 45-43 with 2:23 to go. After Christian evened the score, Kaden Brown hit some free throws to give the Cougars a victory. Brown finished with 11 points, while Jack Karasinski added 17.

Hart 52 Mason County Central 49: The Pirates led by six after the first quarter, before extending their advantage to fourteen at the break. MCC rallied to get within a couple baskets, before the Pirates took control of this game. Kohen Porter had two huge steals and a key bucket in the final two minutes. Parker Hovey scored a game-high 19 points, including 7 in the fourth quarter. Hovey added 8 rebounds and 4 assists. Kohen Porter finished with 10 points and 3 assists.

Holton 46 Morley Stanwood 28: The Red Devils took down the Mohawks in a CSAA-Silver showdown. Holton led by just two points after eight minutes, but they expanded their lead to ten points at halftime. “Our defense was really locked in tonight,” Holton Coach Keith Swanson shared. “Offensively, after a slow start we found our rhythm much better than Tuesday night.” Austin Fowler led the Red Devils with 18 points, 3 assists and 3 steals. Wyatt Monette added 17 points, 9 rebounds, 5 steals and 4 assists. Kevin Erickson pestered the Mohawks defensively, recording 4 steals.

Kent City 67 Lakeview 42: The Eagles started slow, due to a lack of energy, according to Head Coach David Ingles. They brought a little fire coming out of the locker room, and they turned that into a 27-9 third quarter advantage. As a result, they were able to cruise to a win over the Wildcats in CSAA-Silver action. Hayden Carlson finished with 21 points, while Kyler Larson added 15.

Manistee 29 Muskegon Catholic Central 25: The Chippewas edged the Crusaders by four points in Lakes 8 action. It was a strong defensive effort for MCC, but they could not get the shots to fall. It was a back-and-forth battle, where the lead changed eight times. Jaden Johnson had 12 rebounds for MCC, while Dane Rutz added 9 rebounds and 6 steals. Chase Willer scored 6 for the Crusaders.

Mattawan 76 Portage Northern 41: The Wildcats cruised past Steve Hawkins’ Huskies on Friday evening. Ryan Kiesling led the way with 15 points, 8 rebounds, 3 steals and 2 blocks. Noah Vanlaningham added 15 points and 3 assists, while Connor Walsh tossed in 13 points of his own.

Montague 46 Oakridge 31: The Wildcats earned a WMC win over the Eagles on Friday evening. Victories in the first two quarters gave Montague a 25-7 lead at the break. Oakridge played better in the second half, but they were ultimately doomed by a 3/17 three-point shooting night and a 2/9 effort at the charity stripe. Montague was led by Owen Raeth with 13 points and Isaiah Archison with 10.

Ravenna 66 Whitehall 42: The Bulldogs topped the Vikings by 24 points in WMC play. The Bulldogs hit 46% of their shots, including 6/14 from beyond the arc. On the other side, Whitehall was 4/22 from deep and 18/59 from the floor. Perhaps even more frustrating was their 2/12 shooting from the charity stripe. Brodie Fogus paced Whitehall with 19 points and 16 rebounds. Ravenna was led by Kyle Beebe with 19 points, all in the second half. Clay Schullo, Grant Becklin and Travis May all finish this game with 12.

Shelby 40 North Muskegon 34: The Tigers and Norsemen played in a defensive battle on Friday evening. Shelby’s ability to go on a 5-0 run right out of the box in the second half broke the tie, and it proved to be the difference. Bishop Lee led Shelby with 10 points, while Carsen Claeys and Joseph Hayes chipped in 9. Troy McManus led NM with 18 points and 10 rebounds, while Bo Nedeau added 5.

South Christian 65 Holland Christian 52: The Sailors took down the Maroons in a non-conference rivalry battle. Jake DeHaan and Carson Vis led SC with 14 points, while Sam Medendorp added 11 points and 9 rebounds. Jalen Overway paced the Maroons in defeat with 17 points and 12 boards, while Kyle Cannon (14) and Adam Kroeze (10) joined him in double figures.

White Cloud 65 Hesperia 26: The Indians captured a victory over the Panthers in CSAA-Silver play. White Cloud led 22-4 after the first quarter, before adding a 20-7 advantage in the second frame. From that point forward, White Cloud cruised to victory. Taylor Bode scored 17 points to lead the Indians. Maddox Mosley paced Hesperia with 9 points.

Zeeland East 56 Jenison 51: The Chix scored 16 points in the opening frame to take a 6-point lead against the Wildcats. They were able to double that lead at the half. In the third quarter, the Chix continued to add to their lead, creating an 18-point edge. Jenison rallied in the fourth quarter, applying pressure and hitting four consecutive three-point baskets. With four minutes to go, the lead was down to single digits. The Chix iced the game with some key free throws. Connor Schipped paced ZE with 18 points, while Levi Tilden added 13. Jenison saw Caleb Dean lead the way with 15 points, while a trio of players scored 10.

Zeeland West 50 West Ottawa 47: The Dux beat the Panthers at the buzzer. Let’s let the video do the talking.