The Freeland Falcons were back in the State Semifinals for the second straight season. After losing to Grand Rapids Catholic Central in Division 5 a season ago, the Falcons were bumped up to Division 4 this fall. They got a second chance at reaching Ford Field when they advanced to Saturday’s semifinals against Chelsea. The Falcons gave it everything they had, but ultimately fell three points short in a 30-27 defeat.

On their opening drive, Freeland marched down the field. They reached the 29 yard line before fumbling the football away. Chelsea would capitalize, responding with a touchdown drive of their own. Trent Hill powered across the goal line from 2 yards out, giving the team a 6-0 edge.

Freeland answered with their own touchdown drive that concluded in the second quarter. Bryson Huckeby finished it off with a 5-yard quarterback keeper. Their ability to convert the extra point gave the Falcons a 7-6 advantage.

Chelsea aired out the football for their next score, a pass play that went for 34 yards. As the receiver neared the end zone, the ball popped free. Ben Strzyzewski slid into the end zone and recovered the loose ball for the Bulldogs’ score.

Freeland would respond with another touchdown run. Huckeby again powered into the end zone from short distance. Their lead was short lived, as Hunter Shaw booted a 32-yard field goal to push the Bulldogs ahead 16-14 at the break.

Midway through the third quarter, Chelsea padded their lead. Lucas Dunn found Nick Fisk on a 15-yard score that extended the margin to nine points. Neither team scored over the final six minutes of the frame, leaving Chelsea ahead 23-14 and just twelve minutes from Ford Field.

Freeland struck for a big play early in the final frame. Huckeby connected with Evan Vasicek on a 77-yard touchdown burst, pulling the Falcons within three. Coach Townsend elected to go for the two-point conversion, but it was unsuccessful.

The quick-strike Chelsea offense was able to respond with haste. Dunn and Fisk were again the duo, though this time it was 23 yards. This gave the Bulldogs a 30-20 edge with just under nine minutes remaining.

Freeland aired it out for another fast score. Huckeby found Alex Duley on a 44-yard touchdown connection. This brought the Falcons back within three points with six minutes to go.

Chelsea was stonewalled, punting the football back to the Falcons with just under five minutes to go. Freeland chugged down the field, picking up conversion and reaching the red zone. They got down to the 4 yard line, where they faced 4th down and 3. Rather than go for the tying field goal, Coach Townsend sent the offense back on the field. They neared the first down marker, but ultimately were inches short of the line to gain.

The Bulldogs return to Ford Field for the first time since 2018, and the third time in program history. They have lost their two previous attempts at a championship against Orchard Lake St Mary’s (2015) and Edwardsburg (2018), but their quest is even more difficult on Saturday. They will face undefeated Unity Christian, who is chasing the state scoring record with 751 points in 13 games. This game will kick off at 7:30 on Saturday evening at Ford Field. 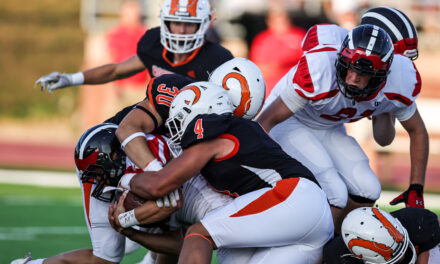 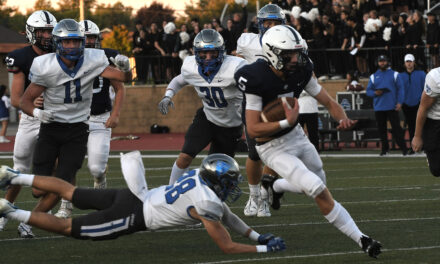