The Lawton Blue Devils were viewed by many as the “misfit” in this loaded Division 7 semifinal. As the only program without multiple State Championships since 2009, the Blue Devils lacked the pedigree on paper. They have made up for that throughout the postseason with their willingness to fight and ability to run the football. Sticking to their strengths, Lawton finally earned their invitation to Ford Field, advancing past Jackson Lumen Christi 21-20 in Saturday’s semifinal.

Early in this game, Lawton had the momentum. The Blue Devils were able to run the football, scoring the game’s first touchdown on the ground. Landon Motter kept the ball, and the signal-caller powered into the end zone from five yards out. A successful kick gave Lawton a 7-0 lead. 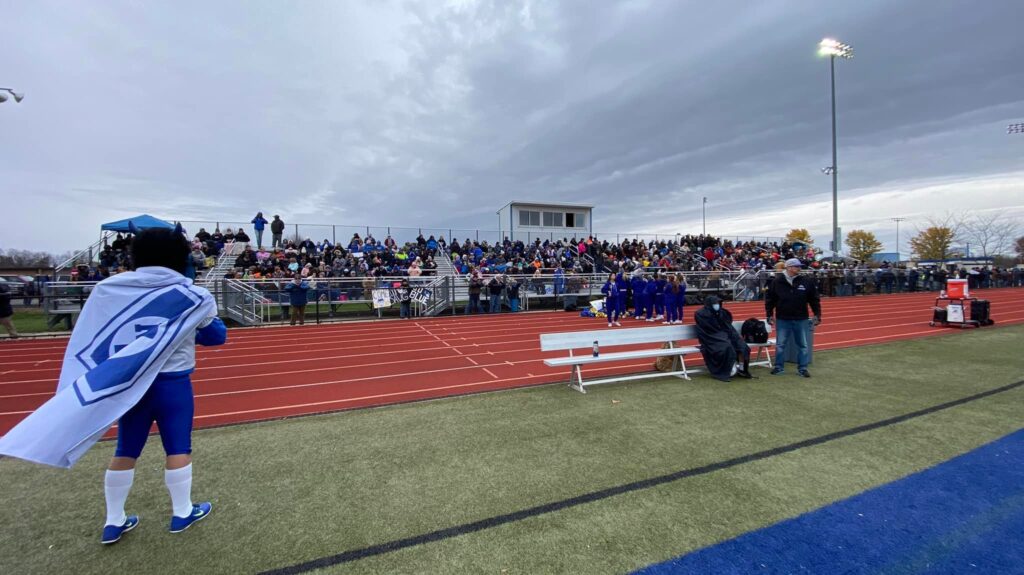 The rowdy Lawton crowd seemed to play a factor early in the second quarter, as Lumen Christi committed three false start penalties on one drive. The Titans punted the football away, pinning the Blue Devils at their own 11 yard line. An 89-yard touchdown march ensued, with a pivotal fourth down conversion near midfield. Jake Rueff, the feature tailback for the Blue Devils, made an impact in the receiving game, hauling in a pass up the seam for a 36-yard touchdown strike. A missed extra point gave Lawton a 13-0 lead midway through the second quarter.

Lumen Christi came to life on their next drive, and they dialed up some trickery. Cole Simpson made a remarkable catch on a halfback pass, advancing the Titans deep into Lawton territory. Derrick Walker would capitalize with a 25-yard dash to the end zone, pulling Lumen within six.

After forcing a three and out, Lumen Christi had the football back. They wasted no time in scoring, as Walker broke free once again. This time, it was a 65-yard sprint past the oncoming tacklers. The Titans converted their extra point, and they took a 14-13 advantage.

Cole Simpson came up with an interception that gave Lumen Christi a chance at a late score. They reached the 28 yard line of Lawton, where they got an untimed down to heave a pass toward the end zone. Teddy Ahlers‘ toss was in the end zone, but it fell incomplete with triple coverage surrounding the targeted receiver. As a result, Lumen remained ahead by a point at the break.

Lumen Christi started the third quarter with a three and out, and the Blue Devils offense was rolling once again. They made their way down to the 30 yard line of the Titans, before another turnover stalled a drive. This time, Cole Simpson recovered the fumble for the Titans.

Unable to capitalize on the miscue, Lumen Christi sent the football back to Lawton. Once again, the Blue Devils gave it away. This time, Landon Motter was intercepted by Cole Simpson, his third forced turnover of the ball game.

Throughout this game, there were peaks and valleys on both sides. One of the most pivotal moments came early in the fourth quarter, when Lumen Christi faced a fourth-and-one near the Lawton 40. Sending out their heavy package, they tried to bowl forward for the conversion. Instead, Lawton pushed back and held the Titans inches shy of the first down marker.

In a story that sounds like a broken record, Lawton reeled off a big rushing play to get deep into Lumen Christi territory. For the fourth time, the football was turned over. This time, Ralph Golden scooped up the loose ball and raced to the end zone. His 76-yard score put the Titans ahead by seven. Looking to extend the lead to two scores, Herb Brogan sent his offense out for a conversion. Their pass attempt was narrowly incomplete, leaving the lead at 20-13 in favor of the Titans with eight minutes to go.

Lawton returned into Lumen Christi territory, again showing their ability to move the football. For the fifth time, the Blue Devils turned the football over, losing another fumble. Fortunately, the Lawton defense stepped up to the challenge and got the ball back. They forced a fumble just moments later, giving their offense new life.

Starting a drive with four minutes on the clock and 53 yards away from the end zone, Lawton went to the ground game once again. Jake Rueff picked up a big 17-yard chunk play to get the football down to the 36 of the Titans. On third down, needing nine yards, Rueff was short. Lumen Christi pulled on his facemask however, giving the Blue Devils an automatic first down.

The march continued, with the Blue Devils inching their way toward the goal line. On third down, Landon Motter used his legs for a 1-yard touchdown run. This brought Lawton within a point, 20-19.

On the first extra point attempt, the snap was high and the kick was no good. Once again, there was laundry on the field. Lumen Christi was called for a roughing penalty, giving the Blue Devils a chance to attempt the conversion one more time.

With the football closer to the goal line, Coach Wade Waldrup sent the offense back out there. “Our kicker was banged up after the first kick,” Waldrup revealed postgame. “That was the only factor behind going for two in that moment.”

Landon Motter took the snap, spun around and faked a handoff to the back. He then tucked the football and ran left, where he caught some key blocks, including one from Drew Stephayn, on his way to the end zone. His successful conversion put Lawton ahead 21-20 with just 46 seconds to play.

Lumen Christi started at their own 20 yard line after a touchback. The Titans were swarmed with pressure, and had passes fall incomplete by mere inches. With 13 seconds to go, Cooper Geib stepped in front of a Ahlers pass, ending the football game.

Despite committing five turnovers in this game, Lawton remained poised on the sideline throughout all of the adversity. “This is just a loose group that loves and believes in each other,” Waldrup shared. “When you have that, the storms aren’t anything but noise you can drown out.”

This victory will send Lawton to Ford Field, where they will take on Pewamo-Westphalia in the Division 7 State Championship game. The Pirates advanced to the finals after defeating Traverse City St Francis 28-21. This will be the sixth time since 2011 that PW is playing at Ford Field, and the team has captured three titles. For the third straight week, Lawton will face a team with a heralded pedigree. After their performance throughout the first thirteen weeks, it’s safe to say that Coach Waldrup’s Blue Devils won’t be intimidated by the challenge. 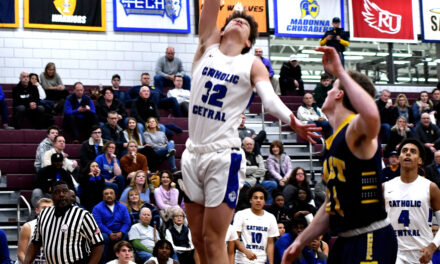