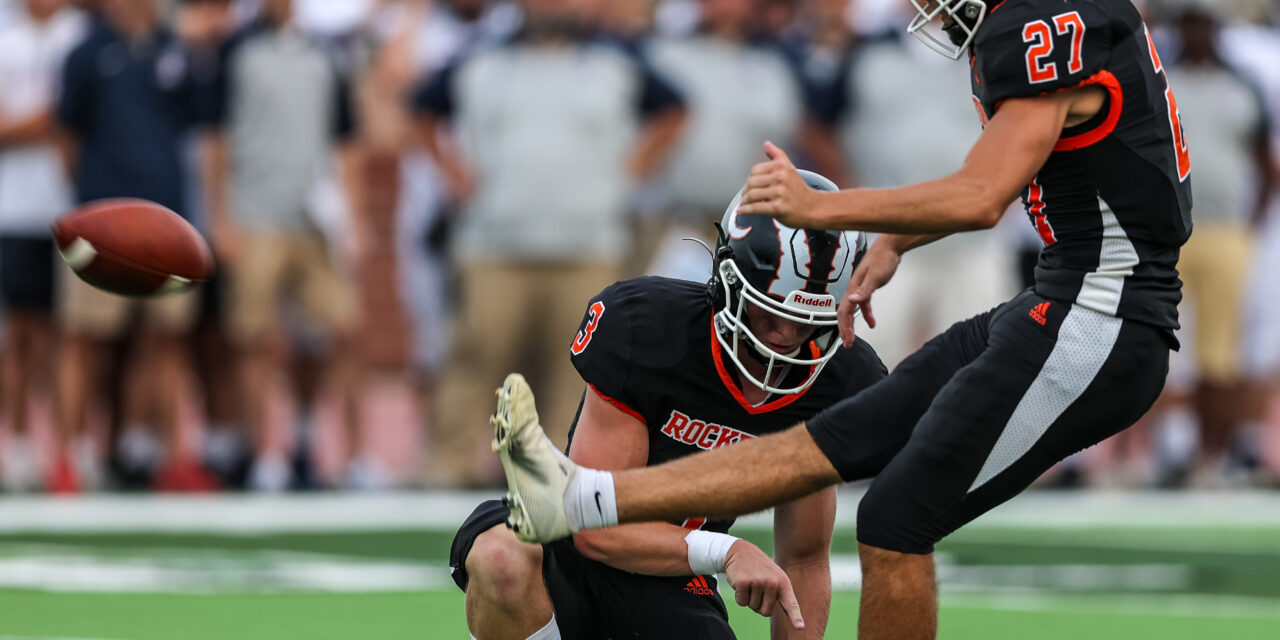 Despite turning the ball over twice deep in Hudsonville territory in the first half and being gouged for long pass plays in that same time frame, Rockford did enough offensively to eke out a 21-16 triumph over the Eagles at Carlson-Munger Stadium on Friday, September 25. With the win the Rams remain perfect on the season at 5-0 as well as moving to 3-0 in OK Red play. Hudsonville fell to 2-3 overall and 2-1 in conference play with the loss. The record for the Eagles is extremely misleading however as all three losses came to teams that have yet to lose a game and by a grand total of 11 points.

“Anytime you commit multiple turnovers in a game and especially where we turned it over, it is tough on the offense to maintain continuity and it makes it difficult for the defense to maintain any momentum they may have built up,” said Rockford Coach Brent Cummings. “But we were able to maintain confidence and keep our composure and get a win in the end.”

Hudsonville had 161 yards passing in the first half and completed a 62-yard pass on the opening drive of the second half that resulted in a field goal that gave them a 16-14 lead. But after that point the Rockford defense limited them to only an additional 24 yards through the air over the balance of the game. It was fairly even statistically as Hudsonville amassed 346 total yards while the Rams totaled 320. But it was done in polar opposite fashion as Rockford dominated the ground game with 235 yards while the Eagles gained 247 via the passing game.

“Our defensive staff has great preparation week after week and I feel we were able to impose our will and maintain our individual responsibilities as the game moved on tonight,” said Cummings. “That was a great effort against a very good Hudsonville team. I am very proud of the efforts of our players and coaches tonight to get another tough win in an excellent OK Red conference.”

Rockford received the opening kickoff and appeared destined to take a quick lead as they smartly marched from their own 10 (following a holding penalty) to the Hudsonville 17. But the turnover bug reared up and bit the Rams on the next play as a fumble was recovered by the Eagles to thwart the drive. The turnover was made even more costly as the Eagles scored on an 84-yard pass from Tre Carr to Dylan Hamm that gave the visitors a 7-0 lead following the conversion at the 7:00 mark of the opening quarter.

The Rams had a quick retort however as they scored on the ensuing drive to knot things up at 7-7. The Rams were the beneficiary of a personal foul and a defensive pass interference to aid the scoring drive. The 11-play 75-yard drive was capped off by a two-yard plunge up the middle from Ram senior quarterback Zak Ahern. Jackson Burkholder added the first of his three successful conversions and it was a 7-7 contest with 4:19 remaining in the opening stanza.

The Eagles then countered with an impressive 17-play 79-yard TD drive of their own to retake the lead at 13-7. The score came on a five-yard jaunt over the left side from Carr and with 7:49 remaining in the opening half. Rockford kept it at 13-7 as they swarmed the extra point attempt and batted it aside with a heavy rush.

The next drive for Rockford again featured an impressive thrust deep into Eagle territory before again turning the ball over. This time the Ram offense was facing a third down and four at the Hudsonville nine. But the Eagle defense came up with a leaping interception at their own eight to again stymie the Rams. Rockford quickly forced an Eagle punt and narrowly averted yet another turnover as they muffed the punt before recovering it in a wild scramble at the Hudsonville 48.

Except for a three-yard run from his sophomore running back brother Ryan, Zak Ahern accounted for each and every other yard accumulated on the following drive for the Rams. Zak Ahern completed a three-yard pass to Mac VandenHout and ran for the other 42 yards before finishing it off with a 7-yard burst over the left side with only 38 seconds left in the half. The Burkholder PAT made it a 14-13 Ram lead and that completed the scoring for the first half despite a lot of excitement on the final play of the half. On the final play of the half Carr floated a deep pass over the middle to Hamm, who had somehow gotten past the Rockford secondary. The speedy Hamm appeared destined for the end zone but a saving tackle from the last Ram defender stopped him at the Ram 27 after the 53-yard pass play.

The second half saw both defenses really step up their play and the scoring grind to a near halt both ways. The Eagles struck first as they connected on a 40-yard field goal to take a 16-14 lead on their opening drive of the second half. Hudsonville came very close to capping that drive off with a TD but a dropped pass at the goal line kept them to three points. The Rams would later return the favor as several passes fell to the turf just off the hands of several wide open Ram receivers.

Zak Ahern gave Rockford the lead back after a strong stand from the Ram defense that saw them take possession at the Eagle 31. This time it was a 5-yard burst over the left side that gave Rockford the lead back at 21-16 with 2:58 remaining in the third quarter. The balance of the contest was played with a defensive bent form both teams as the deepest penetration from either offense only got to their opponents 43. The game ended after four consecutive incompletions from the Eagle offense that allowed Rockford to take a knee on three consecutive plays to run out the clock.

After a blazing start offensively Carr was 11-22 passing for 247 yards and a touchdown. Hamm had only three receptions for the Eagles but those three catches gained 194 yards and a TD. Rockford saw Zak Ahern go 10-24 passing for 85 yards and an interception. But Ahern stood out in the rushing game with 16 carries for 153 yards while Gabe Spees had 75 on 11 attempts. VandenHout led the receiving corps with 4 catches for 24 yards and Alex McLean chipped in with 19 yards on three catches.

Defensively the Rams were led by Rick Beison with ten tackles while Austin Harvey, Luke Vanderwiel and Sam Watts all accounted for seven tackles apiece.

Rockford will return to the road next week as they journey to Jenison to take on the Wildcats on Friday, October 1 at 7:00 P.M.