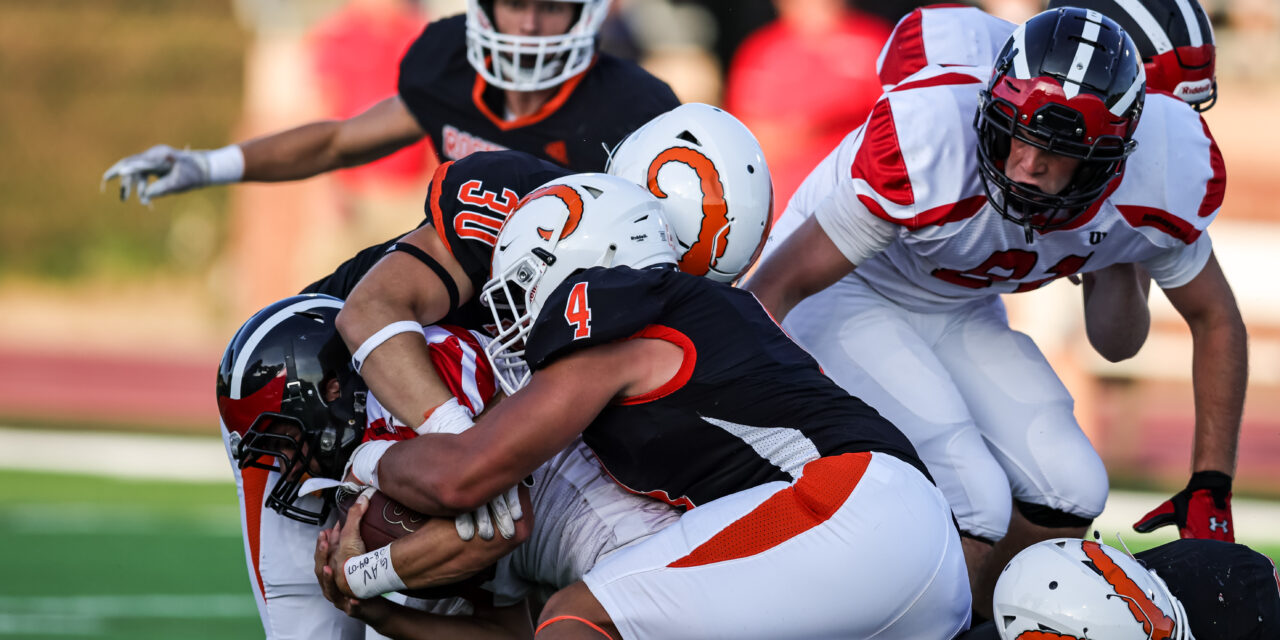 Check out pictures of the game here: https://milespostema.smugmug.com/Rockford-Sports/2021-09-02-Rockford-vs-Cedar-Springs/

For the second consecutive week Rockford jumped out to a quick lead at home on their way to a 35-6 triumph over a solid Cedar Springs squad on a beautiful late summer evening (Thursday, September 2) at Carlson-Munger Stadiu5. Before the end of the opening quarter the Rams held a 21-0 lead and were well on their way to a 2-0 mark on the young season. Unlike last week when Sterling Heights Stevenson rallied from a 23-7 deficit and eventually tied the game at 23-23 and 30-30, there was no rally forthcoming for the visitors. That was heavily due to an excellent defensive effort from Rockford that limited the Red Hawks to a paltry 145 yards for the contest.

“Cedar Springs runs a very detailed offense,” said Rockford head coach Brent Cummings. “We had to match their enthusiasm level from the start and I felt that we did that on a consistent basis tonight. They feature a lot of returning starters and are very well coached. Today was a solid step forward although we still have a lot to work on to get to where we want to be as a team.”

Rockford received the opening kickoff and wasted no time in capitalizing on the possession. Alex McLean fielded the kick and sped forward from his own 15. McLean was not stopped until 52 yards later at the Cedar Springs 33. It took the Ram offense exactly two plays to cash in. Both were runs from quarterback Zak Ahern. His first carry netted 11 yards and a first down and the second reached the end zone after a 22-yard saunter over the left side to give Rockford a 6-0 lead with a mere 26 seconds run off the clock. Jackson Burkholder added the first of five consecutive conversions and Rockford had a quick 7-0 lead almost before the huge crowd had a chance to get settled in their seats.

Aside from his perfect record on extra points, Burkholder put five of his seven kickoffs into the end zone to negate any chance of a return for the Red Hawks. Coupled with McLean’s returns it capped off another impressive night for Rockford’s special teams.

“It was neat to see the development of the special teams this week,” said Cummings. “We have a history of great play of our special teams here at Rockford. Those coaching responsibilities are broken down to different coaches on our staff and they all do a great job.”

Rockford wasted no time adding to that lead after a quick three and out forced by the defense. Taking over at their own 46, the next score took only a single snap. Dropping deep in the pocket Ahern set hid feet and fired a deep pass up the right side to Army commit Tyler Vroman. Vroman had run a fly pattern and left the defender in his dust by about seven yards as he never broke stride before hauling the pass in and prancing into the end zone to make it a 14-0 game at the 9:10 point of the opening quarter. The Rams had at that point run three plays from scrimmage, scored two touchdowns and seen less than three minutes run off the clock.

But the onslaught was far from over after another quick possession for Cedar Springs that forced a punt. A penalty on the return forced Rockford to begin the next drive form their own 13. But the length of the drive was no deterrent to the potent Ram offense. Mixing the run and pass, Rockford used 12 plays to march 87 yards and make it a 21-0 game. The score came on a 12-yard slant pass over the left side from Ahern to receiver Leo Vanderwiel.

But the Rams again hit a lull offensively in the second quarter much like last week’s contest and failed to add to their point total. Asked if there may have been a reason for that Cummings offered his insight.

“We need to continue to grow and focus on the task at hand for the entirety of the contest,” said Cummings. “It isn’t just one thing and I think we will get much better as the season progresses. Zak (Ahern) continues to improve with the reads of his progressions. He continues to want to get better and will get even better as we move forward.”

The Red Hawks got their only score with only 37 seconds remaining in the opening half on a seven-yard run. And a fair chunk of the yardage accrued by the Red Hawks came on Rockford miscues that gave Cedar Springs multiple chances and negated a lengthy Ram interception return. Rockford had a personal foul and a very costly roughing the passer penalty that negated the pick and gave Cedar Springs a first down at the Ram 17. Kade Kostus rose up to sack the Red Hawk quarterback on the conversion try and it was a 21-6 Rockford lead at the half.

“I think we did a much better job of tackling tonight,” said Rockford defensive coordinator Randy VanderVeen. “Cedar Springs does a great job of running that offense and I felt we just got a lot of people in on every tackle it seemed like. What they run offensively is very similar to Grandville and we were able to contain them for the most part.”

Rockford again quickly added to their lead after forcing another Red Hawk punt after the first three plays of the second quarter. Taking over at their own 43, it took Rockford only five plays to reach paydirt. The key play of the drive was another downfield shot from Ahern to Vanderwiel that netted 38 yards and put the Rams in a first and goal situation at the Red Hawk 3-yard line. Gabe Spees did the honors this time on a dive over the left side to make it a 28-6 game with 8:31 to play in the third quarter.

The next Ram possession proved to be the final points of the night for either team. Starting from the Red Hawk 40 Rockford used 11 plays before Ahern again found the end zone from four yards out to make it a 35-6 Ram lead with 1:45 left in the third stanza. Neither squad got into the red zone over the balance of the game and the Rams had a 35-6 victory.

“Jason VanderLaan has done an excellent job of reading what the opposing defense is susceptible to as our new offensive coordinator,” said Cummings. “There is a lot of behind the scenes work that goes into what we run during the games. And we have not skipped a beat as he is able to communicate his game plan to each and every coach on our staff.”

Rockford was led by Ahern offensively as he accounted for four of the Rockford touchdowns via both his arm and legs. Ahern ran for a pair of scores and tossed two for good measure. Ahern had 11 carries for 92 yards while going 13-21 passing for 164 yards. McLean led the receiving corps with five catches for 30 yards. Vroman had a pair of receptions for 71 yards and a touchdown while Vanderwiel reeled in two as well for 50 yards and another touchdown.

Rick Beison had a hand in 15 tackles to lead the defense. Luke Vanderwiel added nine stops and Jack Lamancusa and Kostus chipped in with eight stops.

Rockford will continue to frequent the friendly confines of Carlson-Munger Stadium next week when they host East Kentwood. The game will be played on Friday, September 10 and kickoff is slated for 7:00 P.M. 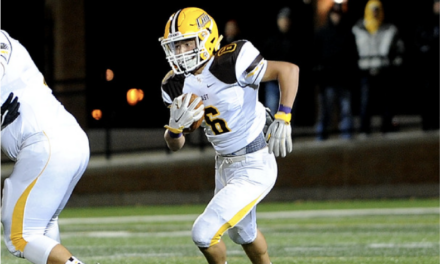