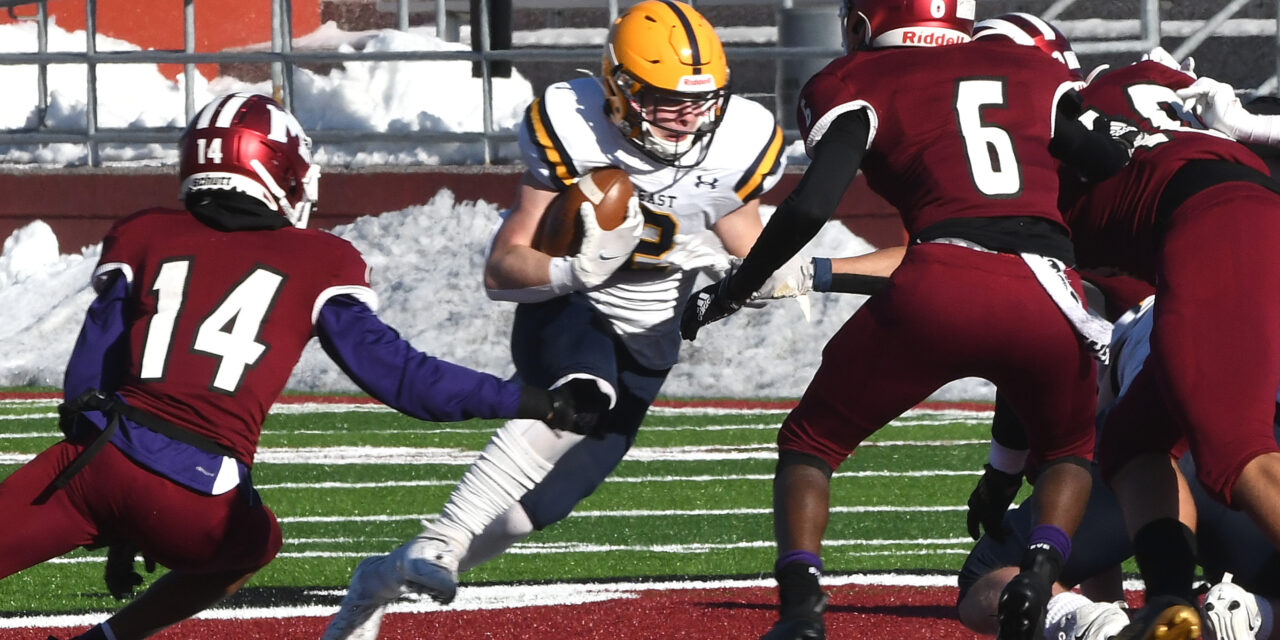 The Muskegon Big Reds have ended the East Grand Rapids Pioneers season for the 3rd consecutive year. All three times it has been at the Regional Finals. This year it was at Hackley Field in downtown Muskegon, home of the Big Reds. In years past Muskegon coach Shane Fairfield has played in the Regional Finals on a neutral field. Hackley now has an artificial surface, and the field was in excellent shape.

The limited number of tickets to the game were evenly divided between the two schools, but the crowd was predominantly visitors from East Grand Rapids. Sadly for the Pioneer players and fans, the game would be dominated by the Big Reds.

The Pioneers started the game with the ball. After a short kickoff (assumedly to keep the ball out of Nate Milanowski’s hands in the open field) the Pioneers put together a solid drive but eventually turned the ball over on downs just outside the red zone. Less than 2 minuets of game time later, the Big Reds would put the first of three touchdowns on the score board. Jr RB Miles Walton would score for the Big Reds from 1 yard and Fr K Adrian Ramos would add the PAT(Ramos has not missed a PAT all year). Midway through the first it was 7-0 Muskegon.

Muskegon would score in the second quarter on a 29 yard TD pass and catch from Sr QB Amari Crowley to Jr WR Jeremiah Dault. The duo would again make a scoring connection in the third quarter. This time it was a 15 yard pitch and catch. That play would see the Big Reds enjoy a 21-0 lead with just over a quarter and a half left to play. Less than a minuet before the end of the third frame, Ramos would double his personal point total for the day with a 24 yard Field Goal extending the lead to 24-0.

East Grand Rapids struggled to get things going offensively. Typically they rely on Sr RB Nate Milanowski to provide the majority of the offense. Today the Big Reds were able to keep him in check. Nate would finish the game with 21 carries totaling 59 yards. In the previous games for the Pioneers, that total would represent one or two of Nates longest carries of the night. He would typically share the spotlight with Sr QB Patrick Burns. Today Burns suffered a lower leg injury near the end of the first quarter that sidelined him for the remainder of the game. Jr David Bernecker (shown below #3) would enter the game as Burns’ replacement, but the offense just wasn’t quite the same. 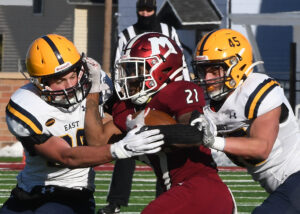 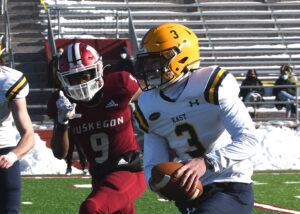 The Big Reds rushing attack was a three headed monster led by Sr RB Jacarri Kitchen with 118 yards and Sr QB Amari Crowley and Jr RB/QB Myles Walton who combined to add 85 yards to the ground attack. Through the air Crowley would go 10/13 for 156 yards and 2 TD’s. Sophomore’s Jeremiah Dault and Damari Foster would have the majority of the catches and yards with Dault catching both touchdown passes.

With the Loss the Pioneers finish their season 6-4 and add another District Championship trophy to their showcase. Coach Casey Longo will see 17 members of his team graduate with 35 juniors and 1 sophomore returning in the Fall.

The Big Reds will move on to the State Semi Finals next week. Their 9-1 record and  58 playoff points will require them to go on the road. DeWitt (11-0) has about 11 more playoff points and will host the Big Reds next Saturday.

The Big Reds and the Pioneers have now met 8 times. East has never won against Muskegon. For the third consecutive year they have lost their final game of the year to the Big Reds at the Regional Final level of the MHSAA Playoffs.

Personally, I would like to thank Tim Johnston and Wende Johnson (AD and Athletic Secretary) at East Grand Rapids for all of the support. Their hard work and dedication to the students and community are second to none. A special thanks to Cumulus Radio for broadcasting the games on the FM and AM radio, as well as providing Buzz Goebel as my broadcast partner this season. 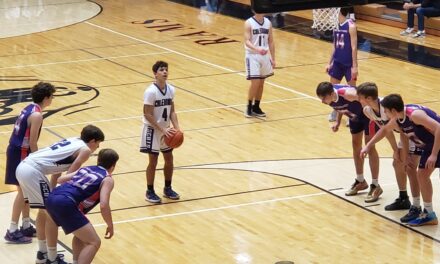 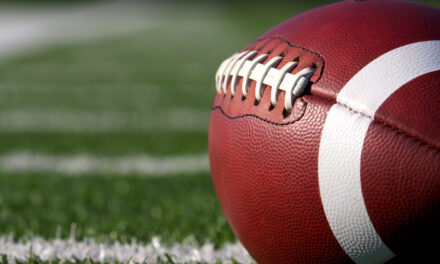