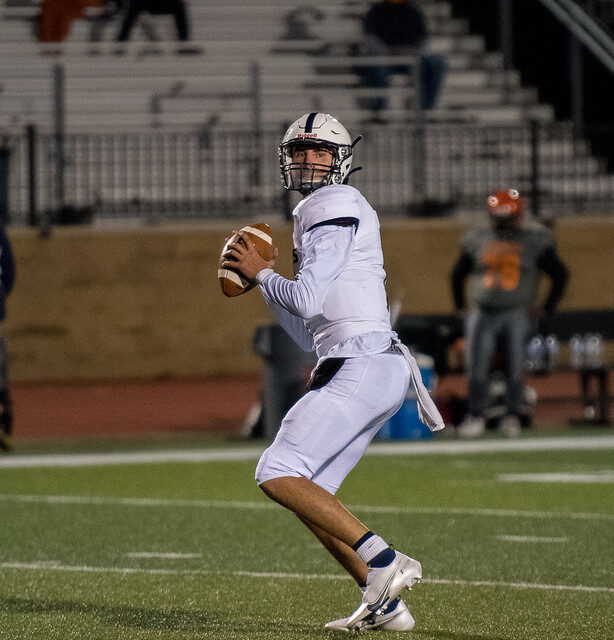 The Edwardsburg Eddies were playing in their fifth regional championship game, this time hosting South Christian, a team they had not faced since 2014. In that semifinal, the Sailors won a thrilling shootout. On this Saturday night, there was no need for the dramatic as Edwardsburg rolled past South Christian 47-7.

In the first quarter, Edwardsburg was the only team that scored. Gavin Houser broke off a thirty-yard touchdown run, and Ethan Cebra added a two-point conversion to give the Eddies an 8-0 lead.

South Christian got within a point in the opening seconds of the second quarter, as Trevor Hansen went twenty-eight yards through the Eddies for a touchdown. Edwardsburg responded with a pair of touchdown runs in the end of the first half. Logan McColley powered his way across the goal line from a yard out, and he followed that up with a conversion. Drew Bidwell capped off the scoring with a two-yard conversion. In the only pass of the game for Edwardsburg, Jacob Pegura found Landon Mikel for a two-point conversion that extended the halftime lead to 24-7.

In the fourth quarter, with the running clock in effect, the scoring was limited. The only points added to the scoreboard came on a forty-yard field goal by Edwardsburg’s Trevor Houseworth. This brought the game to its final tally of 47-7.

Edwardsburg rushing for 308 yards, their entire offensive yardage tally. The Eddies had seven players gain at least twenty yards on the ground, with Jackson Hoover (65) and Gavin Houser (61) leading the way. Drew Bidwell had three touchdowns to lead the team in scoring, while Hoover, Houser and Logan McColley joined him with a touchdown each.

With the victory, Edwardsburg will advance to the semifinals where they will host Cadillac next Saturday. The Vikings advanced to their first ever semifinals with a 27-23 victory against Forest Hills Eastern on Saturday night.

Freeland Scores Thirty-Two Unanswered to Open 2017 With a Win