Central Montcalm scores first, but they were not able to hold off the top team in the Gold, as Tri-County wins 58-14.

The Hornets came out firing when Jamison Johns caught the pass from Emmett Lingeman from 11-yards out to get the game’s scoring started. The PAT was good. The Vikings responded, accordingly, as Stuart Gould took a 28-yard sweep to the house the very next series. They converted the 2-point try. With under 2-minutes left in the 1st quarter, Trent Behrenwald found himself in the endzone for his first score of the game. The following defensive possession for the Vikings, Logan Hallman picked off Schultz and took it 35-yards for the score. At the end of the 1st quarter Tri-County led 22-7.

The 2nd quarter started just as the 1st did, with a Johns touchdown reception. This time from 55-yards out. The PAT is good. The clock ticks to 7:30 left in the half and Behrenwald breaks loose from 50-yards out and finds the endzone. With the clock under 15 seconds remaining, David Sheehan airs it out to Gould for the 47-yard score to go into half. The 2-point try is good. At the half Vikings 36, Hornets 14.

Not even 30 seconds out of the break, Behrenwald breaks an 85-yard run for his 3rd score of the game. 2-point try is good. Behrenwald would have another opportunity to score exactly a minute later, this one a little closer from 7-yards out and he would convert. The 2-point try was no good. That would end the 3rd quarter. The 4th quarter didn’t have much scoring other than an Ian Boden 13-yard rush to give the Vikings 58 points. The final: Tri-County 58, Central Montcalm 14.

The Vikings move to 6-0 on the year. They will play Big Rapids at home next week. Central Montcalm will fall to 1-5 and will travel to Grant in week seven. 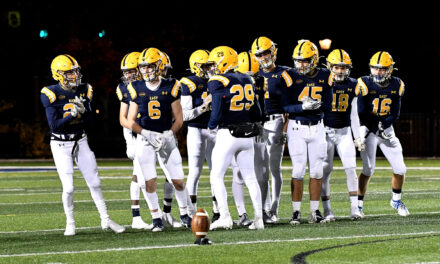