The Freeland Falcons have had nearly everything go their way to start the 2022 campaign. The Falcons have been a force on both sides of the ball scoring over 40 points per game in all of their three matchups, and not allowing anything more than 14 points during that time. They would look to see if they could continue that against a tough Essexville Garber team. Garber could say the same, until last week, when they ran into a feisty Swan Valley team, losing their first game of the year. The Dukes would look to get back on track when they traveled over to Freeland to take on the Falcons.

Garber would get the ball first in this one, and they were able to put together a great drive that looked like the Dukes would be off and running for the night. Driving deep into the Falcons territory, the drive seemed to be destined for points early on. There would be points on that drive, however, they would not be on the Dukes side of the board. Evan Vasicek would halt that. Vasicek would pick off a Cade Coquillard pass and take it all the way back on a 77-yard interception return. The Falcons would go for two after a Garber penalty. This would give Freeland an 8-0 lead after one.

Freeland would strike again after an 8-play drive when Nick Harrington would pound it in on a 5-yard touchdown run. Another Garber penalty would leave the Falcons going for two again. It would be 16-0, Freeland, after another successful two point try. Garber would show some moxie though. The Dukes would get right back in this one when Coquillard would hook up with Ethan Burrows, capping off a 7 play drive. The PAT would be good, this would then cut the Freeland lead to 16-7. The momentum would be in complete favor of the Falcons heading into the half. Freeland would put together a methodical drive in the weighing minutes of the first half. It looked like the Falcons would be on the verge of punching another one but two Falcons penalties would look to derail the drive. Freeland would send out their special teams to try and add another three after the penalties. But the three points wouldn’t be a given here. Instead, Freeland would find the end zone on an errant snap where Ty Fournier would have to scramble to find daylight. Daylight would be in the name of one Daniel Duley, who Fournier found at the 5-yard line, and Duley would do the rest. This would give the home team a 24-7 lead at the half, sucking all of the life out of Garber.

Freeland would use that to their full advantage in the second half. With the Falcons getting the ball to open up the 2nd half, they would put together a 9-play drive that would be capped off by a Brayden Petre 1-yard touchdown run. The Falcons would settle for the PAT, giving themselves a 31-7 lead.

In the 4th quarter they would add on more. Freeland would put together another 9-play drive when the momentum man himself, Vasicek, would find the end zone again. This time he would wouldn’t have to travel far as he would plunge in on a 1-yard touchdown run. This would make it 38-7, Freeland. To top off the night, Andrew Purdy would get in on the action from 1-yard out. Freeland would go on to win this one, 45-7. It was a game in which Garber had a chance to make interesting, but Freeland would take full advantage of the costly mistakes.

Freeland will move to 4-0 overall on the year. They now sit at 3-0 in conference play. The Falcons were not playing look ahead tonight, as they now will face the Frankenmuth Eagles next week in what could be the game of the year in the TVC. Frankenmuth will come in at 4-0 overall, and they too sit at 3-0 in the conference. Those two will clash at 7:00 in Freeland next Friday night in what will be a thriller broadcast live on Michigan Sports Radio. Garber will move to 2-2 overall, and 1-2 in TVC play. The road won’t get any easier for them, as they will have another battle on their hands against an improved Birch Run team. Birch Run bounced back this week in a tight one over Alma. Birch Run now sits at 3-1 overall, and 2-1 in the TVC. They welcome in the Dukes next Friday night with a start time of 7:00. 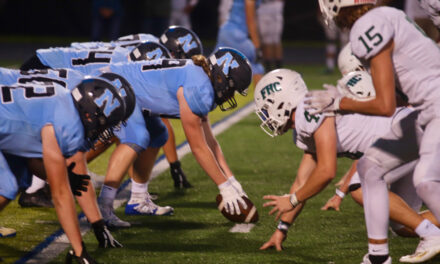