The Wayland Wildcats entered Week 3 as a darling in the West Michigan football circle. A team with just one victory in the past three seasons, the Wildcats started 2-0 for the first time since 2018. On Friday, they took on a rival Middleville team that had started 0-2 with humbling defeats against Hastings and Lowell. In a low-scoring affair, Middleville was able to flip their season script with a 14-7 victory.

Neither team would find the end zone in the first half of this game. The defenses continued to step up and limit offensive momentum. Carsen Burbridge finally broke the scoring seal with a 4-yard quarterback keeper. A successful PAT put the Trojans ahead by 7. Early in the fourth quarter, Tyler Gavette doubled the Middleville lead with a 4-yard carry of his own.

Trailing 14-0, Wayland finally found the end zone. With their offense sputtering, the defense provided a spark on the scoreboard. Dustin Loomans, the Wildcats quarterback, made an impact on defense when he scooped a loose fumble and raced 44 yards for a touchdown. Wayland would get within seven, but never closer.

It was a big night for Tyler Gavette, as he turned 11 carries into 80 yards and a touchdown. Carsen Burbridge delivered 7/8 passes for 58 yards. In defeat, Dustin Loomans rushed for 40 yards, passed for 53, and returned the fumble for a 44 yard score.

Next week, Wayland will try to bounce back against 3-0 Forest Hills Eastern. Middleville, now 1-2, will look to return to .500 when they face Ottawa Hills. 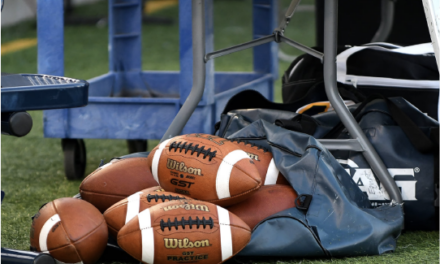