Many have dreamed of this moment since they began playing football. With just four remaining teams left, each team is within arms length of a State Championship in Division 5. With a win this Saturday, four teams have the opportunity to make that revelation come true.

Gladwin football is in the midst of a historic season for their football program. They’re new to this show and have a chance to cement their first trip to Ford Field with a win this Saturday. Although they are the new kids on the block, they sure don’t act like it. The Flying G’s have turned themselves into a force to be reckoned with and it will be a surprise to no one if they’re playing for a State Championship next week. That’s how dominant this Gladwin team has been.

The Flying G’s come in at 12-0 on the season. The offense is putting up 47 ppg on the season. When they are rolling, they are rolling and can give keep opposing defenses off balance. The defense has 5 shutouts on the season and are giving up just over 8 ppg through twelve games. Of teams on their schedule that made the playoffs, Gladwin has outscored them 338-94. They played quite possibly the best team they’ve faced all year in Muskegon Oakridge last weekend and went on to cruise 26-8 behind a dominant 2nd half.

The Gladwin offense has a ton of firepower. Veteran QB Nick Wheeler is at the helm for the Flying G’s. Wheeler has passed for 920 yards on the season to go with 10 TD’s and just 4 INT’s on the year. He’s pitched in another 819 on the ground with 19 TD’s. Logan Kokotovich has helped with 833 yards rushing and 11 TD’s. Another weapon out of the backfield is Earl Esiline. Esiline has run rapid on defenses for 1,048 yards and 14 TD’s. Receiver Lucas Mead can do a little bit of everything, he’s accounted for 8 total TD’s on the season. Receiver Kaden McDonald has pitched in with 5 total TD’s on the season. They spread the ball around and have a dynamic offense that can give you fits.

The Flying G’s defense will come at you in a lot of different ways. Like the offense, the defensive line is dominant. They’re able to open up lanes for the linebackers and the secondary doesn’t let anything get past them. The biggest thing with their defense is they’re smart and always communicating. It’s a unit that is truly in sync.

Is this the group that could be holding a State Championship next week? There’s no doubt. The offense is one of the best in the state and they don’t let defenses settle in. The offense is much like the defense, aggressive. They have one goal in mind every time they get the ball and that’s going and punching it in the endzone in a hurry. Gladwin may have had the perfect opponent last week in Oakridge. Gladwin has been able to dominant the line of scrimmage on offense all year they weren’t able to do that in the first half of last weeks game. They came out in the 2nd half and were able to which only gives that unit even more confidence to know they can bully some really good teams up front. The Flying G’s defense is everything you could ask for. They play hard-nosed football and they let you feel it on every play. This is a team that has a chance to keep their special season going all the way to Ford Field. But, they face an even bigger challenge that they will look to tame.

The Grand Rapids Catholic Central Cougars are one of the most respected programs in the state. Each year, you know what you’re going to get from them. That usually winds up being a team with a chance to play for a State Championship. Since 2016, the Cougars have been to this point in the year six times. Five of those seasons, have wound up with them being the lone team left in their division at the end of the day. They are riding on the cusp of three State Championships in a row. Here they are again with a chance to keep it going.

Catholic Central comes into this one at 11-1 on the season with the lone loss coming by just two points to Grand Rapids South Christian, a team that is still alive in the playoffs. The offense puts up over 40 ppg and they have built on that this post-season. The Cougars will sling the ball around a bit being a pass first team. They do a great job in keeping defenses honest and can beat you by way of ground as well. This is a team that gets the ball into their playmakers hands.

On the defensive side of the ball, the Cougars play fundamentally sound. They don’t put a lot on their guys and just play extremely sound football. They limit what you can do as an offense and really test an opposing offense’s big plays. They make you put together long drives and beat you the hard way. Ryan Eastland leads the defense with 133 tackles. Kellen Russell-Dixon holds the team lead in interceptions with 3.

Can they make it four State Championships in a row? The Cougars are a program that has been expected to compete for state titles every year. This is another group that is capable of keeping that going. They are explosive on both sides of the ball and one of the most fundamentally sound teams in the state. It might just wind up with them holding the crown again. But, they’ll see if they can get past a very good football team in Gladwin.

This has to be one of the most intriguing matchups in the playoffs this season. Catholic Central comes in as a powerhouse but they will face a Gladwin program who is building something special of their own. Gladwin Head Coach Marc Jarstfer knows the challenge but he knows his guys will be ready. “There’s no doubt it will be a tall task, there’s no doubt about that. But you have 48 minutes of football and if you execute better than they do with your scheme and what you think is important, you’ll be right there late in the game. We’ll look to take our gameplan, relay it to our guys, and look to execute it on Saturday”. Buckle up. This one won’t be for the faint of heart. This will be one heck of a football game when these two faceoff at Ithaca High School with a 1:00 start time.

Eagles on Fire! Frankenmuth Firing on All Cylinders 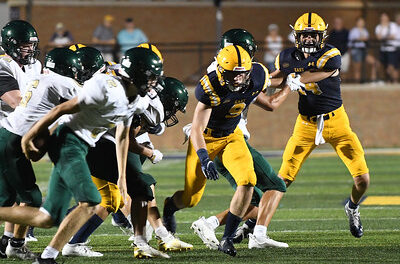