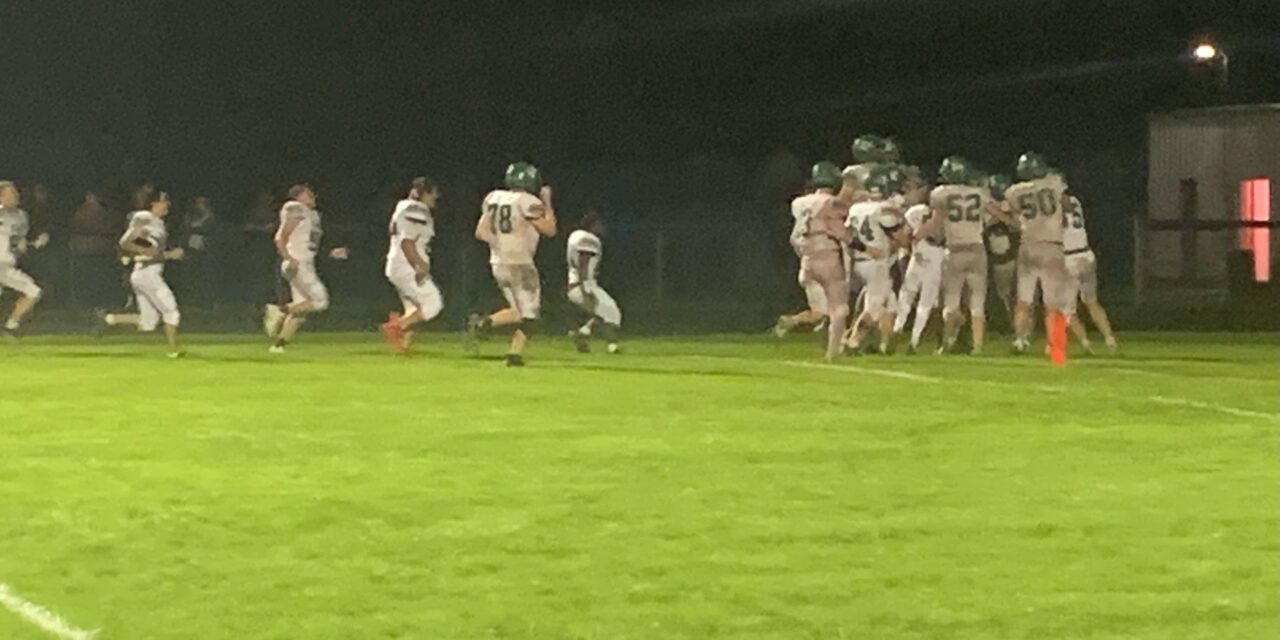 The St.Louis Sharks came into week 1 hoping to build off a successful 2021 campaign. Although the Sharks are young, they looked hungry early on. Enter the Calvin Christian Squires, another young yet talented team. The Squires were determined not to the let the Sharks have all the fun in this one.

The Squires received the opening kick off in this game. Even before the crowd could get to their seats, quarterback Paul Bouma hit Matt Elderkin with a deep bomb to put the Squires up 8-0 after a successful two-point try. The first offensive drive for the Sharks couldn’t result in anything, and shortly after that, Bouma would hit Elderkin for another touchdown. The 2-point try would go awry but it would still give the Squires the 14-0 edge.

Buckle up. The Squires’ first offensive possession of the second quarter would halt due to penalties. At this point, things got interesting. St. Louis decided to get in on the scoring action when quarterback Thomas Zacharko kept the football and ran it to the house, getting the Sharks right back in it. After the successful 2-point try, the lead was cut to six, 14-8.

The Squires would get in their own way again with a couple costly penalties on their ensuing drive. The Sharks’ next offensive possession would be halted by a Josiah Campbell sack. Just when you thought that the Squires would regain control, freshman Walter Parlove came up with a monster hit on a punt return to ignite the Sharks and their home crowd even more.

Calvin Christian picked up a big 1st down to cross the 50-yard line, appearing to regain some of the momentum offensively. At that moment, another Sharks freshman decided to get in on the action, as Laythan Haworth secured an interception to give the Sharks great field possession.

The ensuing Sharks drive would be for not, however, as the Squires halted the drive in its tracks. The Sharks would get the ball right back, as Zacharko recovered the loose ball on the Squires side of the field. After it looked like the St Louis drive might stall, squandering good field position, the Squires would be called for a late hit on Zacharko. This set up shop for the Sharks at the Calvin Christian 1-yard line. Zacharko would then punch it in. But wait. The touchdown would be called off from a holding call moving the Sharks back to the 6 yard line. Zacharko would not be dismissed this time, however, as the fleet footed quarterback would finally get into the end zone, tying this one at 14.

Coming out of the half, both defenses made adjustments to keep the offense at bay. Calvin Christian tried to gain momentum early with an onside kick but the Sharks pounced on it. Throughout the third quarter, both defenses continued to come up with key stops.

The Squires put together a drive deep in the St. Louis side of the field, before RJ Macias batted down a 4th and two pass attempt, giving the Sharks the ball back. The teams would then jockey for position before Jonathon Flores’ punt block gave the Sharks great field position.

The Sharks would drive, after a big penalty on the Squires, the Sharks looked like they might be the last ones laughing. That drive stalled, and it appeared overtime was looming. With about 33 seconds left, the Squires regained possession and started to put together a drive. A big pass interference call would put the Squires inside the Sharks 20-yard line with just seconds to play.

With enough time for one final play, the Squires took to the air. Bouma would find James Daniels up the seam for the game-winning touchdown, and the scoreboard read Calvin Christian 20, St. Louis 14 with no time left.

The Squires will look to build on this momentum as they take on Muskegon Heights in their home opener. The Sharks will look to rebound in a tilt with Hesperia on the road next Thursday.