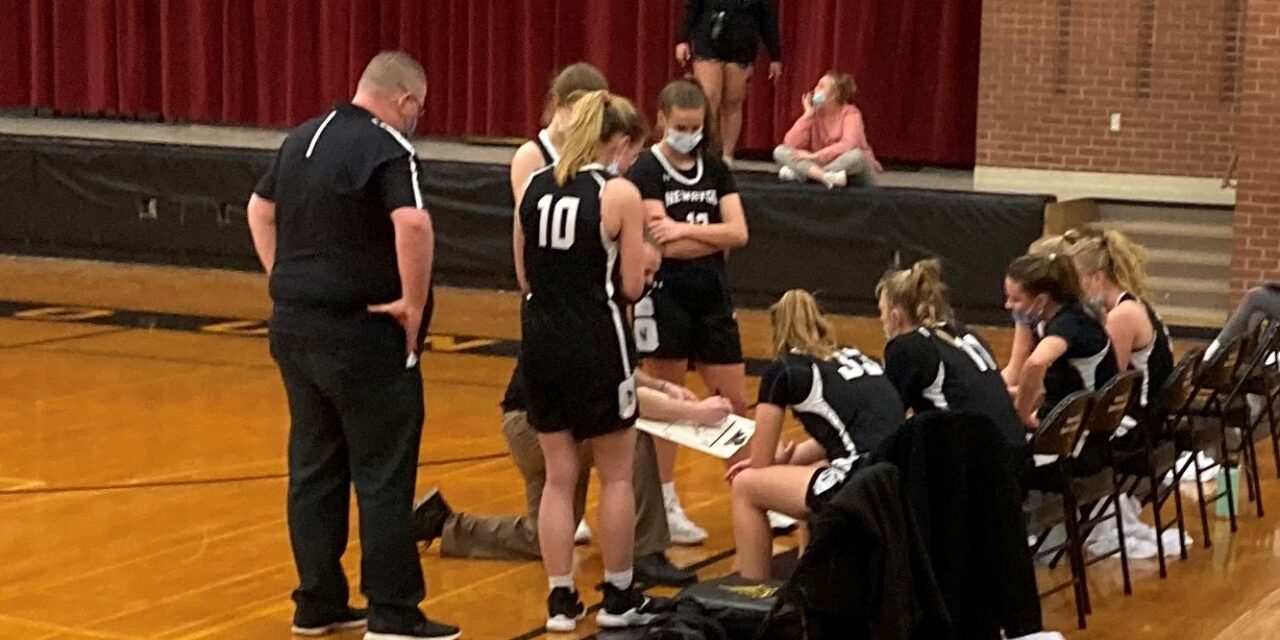 Kent City 50 Morley Stanwood 38: The Eagles defeated the Mohawks in Silver division play on Friday. Madelyn Geers scored 12, the difference in this game. A trio of triples in the fourth quarter were pivotal to the team creating separation after a narrow 26-22 halftime edge.

Muskegon Catholic Central 58 Orchard View 17: The Crusaders charged past the Cardinals in Lakes 8 action on Friday. It was only 7-5 MCC after the first quarter, but they pushed that lead to 30-14 at halftime and 51-16 after the third frame. McKenna Gentry paced the victors with 20 points, while Erin LaVigne added 9.

Allendale 48 Unity Christian 43: The Falcons defeated their rivals on Friday evening in OK Blue play. Unity led 36-25 after three quarters, before Allendale embarked on a huge rally. Hannah Schroeder scored 14 of her 19 points in the fourth quarter for Allendale, while Jatriana Wilson provided a spark in her defensive and rebounding efforts.

Spring Lake 60 Fruitport 17: The rivalry battle between Fruitport and Spring Lake went to the Lakers rather handily on Friday. Team defense, unselfish play and balanced scoring powered the victory. Ella Andree led Spring Lake with 12 points, while Jennifer Judge tossed in 8. A plethora of other Lakers found the scoring column. Ash Olson paced Fruitport with 9 of their 17 points.

West Catholic 68 Hamilton 29: The Falcons soared past the Hawkeyes on Friday to remain unbeaten in league play. West Catholic outscored Hamilton 24-8 in the first quarter and never looked back. The Falcons hit ten triples as a team. Abbey Kimball scored 23 to lead WC, while Anna Ignatoski (14) and Reese Polega (8) chipped in their fair share.

South Christian 41 Middleville 31: The Sailors defeated the Trojans to improve to 7-1 in league play and 11-3 overall. Ashley Thomasma scored 19 for the victors, while Sydney Vis added 13.

Mona Shores 67 Union 19: The Sailors had little trouble with Union in league action, getting out to a 24-4 first quarter lead and never looking back. Khaleeya Cook (15), Olivia Sobczak (14) and Lily Miller (14) all finished in double figures for the victors. Christina Maze scored all 19 for the Red Hawks.

Jenison 37 Grandville 36: The Wildcats defeated the Bulldogs by a single point on Friday evening. Terin Maynard (19) and Ella Haik (13) were the top performers for the victors. Claire Gregwer (10) led Grandville in defeat.

Rockford 62 Caledonia 26: The Rams led 13-11 after the first quarter, before they held Caledonia to single digits in each of the three final frames to widen the gap. Megan McCauley (15), Anna Wypych (13), Alina Anderson (10) and Elle Irwin (10) were in double figures for the Rams. Morgan Babb, Avah Winstrom and Teresa Abraham each scored 5 to top the Caledonia contingent.

Byron Center 64 East Grand Rapids 32: The Bulldogs went on the road and secured a victory over the pesky Pioneers, doubling up EGR in the process. BC is now a perfect 8-0 in league play and 11-2 overall. EGR slides to 7-7 on the year and 5-3 in the OK White.

Lowell 77 Forest Hills Central 56: The Red Arrows secured a victory over the Rangers on Friday, thanks to four ladies in double figures. Braxcynn Baker (21) led the way, while Piper Risdon (18), Emma Bruwer (16) and Taryn Jackson (12) joined the party. Theryn Hallock led FHC with 39 points in defeat.

Martin 45 Fennville 19: The Clippers jumped out to a 12-1 first quarter lead, never looking back. They led 25-6 at the break and 36-12 after the third quarter. Najeeah Chambers (7) and Lila Rosema (6) paced Fennville offensively. Gracie Shettler (14), Maddy Bogdan (8) and Makala Goddard (8) led Martin.

Saugatuck 54 Lawton 47: The Trailblazers defeated the Blue Devils in SAC play on Friday. Reese Olson scored 12 to pace Lawton, although Gabby High scored 11 first half points before exiting with a knee injury.

Hart 60 Shelby 25: The Pirates rallied from their midweek defeat, taking down the Tigers in a battle of Oceana County foes. Kendall Zoulek scored 14 to lead Shelby, who shot 8/37 as a team. Aspen Boutell (18 points), Addi Hovey (12) and Abby Hicky (10) paced Hart in this victory.

Montague 38 Whitehall 25: The ‘Gue secured a victory in their rivalry bout with Whitehall on Thursday. An 8-0 second quarter allowed Montague to take the lead, and they expanded it during the second half. Charley Klint and Marissa Strandberg each scored 7 for Whitehall. Kendall Osborne (11 points, 5 assists, 5 rebounds) and Claire Meacham (10 points, 11 rebounds) led Montague.

Brethren 39 Mason County Eastern 24: The Cardinals fell against Brethren in WMD action on Thursday. Corinna Hernandez scored 7 for MCE, who were doomed with just four second half points as a team.

Edwardsburg 61 Dowagiac 20: The Eddies took down Dowagiac in Wolverine action on Friday. Macey Laubach’s 14 points helped the Eddies improve to 14-0 on the season.

Frankenmuth 60 Bridgeport 9: The ‘Muth cruised past Bridgeport to remain undefeated in league play. The Eagles created an 18-1 lead after the first quarter, and added quarter victories of 13-2, 21-0 and 8-6 to arrive to the final margin of victory. It was a swarming defensive effort that saw 19 steals by the victor’s defense. Mia McLaughlin led the way with 21 points, 7 assists, 5 steals, 3 rebounds and 3 blocks. Emma Kerkau added 14 points, while Amy Kern recorded 10 points and 7 rebounds. This moves the ‘Muth to 12-1 overall and 8-0 in TVC action.