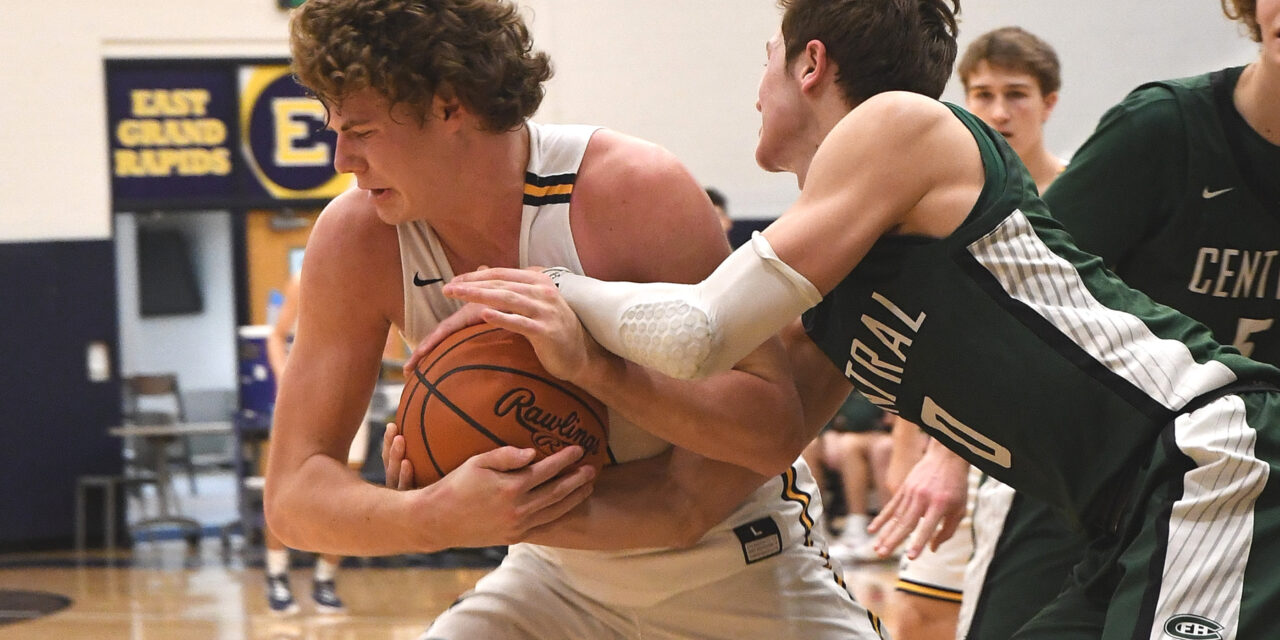 Frankenmuth 54 Essexville Garber 46: The Eagles edged out the Dukes in TVC action. Garber led by five at halftime, before a 17-6 third quarter lead gave Frankenmuth the lead back. Nate Jackson paced the ‘Muth with 13 points and 10 rebounds, while Cole Jankowski (12) and Travis Brenner (10) were also in double figures. Brendan Newsham (14) led the way for Garber.

Baldwin 66 Walkerville 28: The Panthers improve to 5-0 overall and in West Michigan “D” play with this dominating performance against Walkerville. Louie Jackson led the way with 18 points for Baldwin.

Caledonia 52 Jenison 35: The Fighting Scots were able to capture an OK Red victory over the Wildcats on Tuesday. It was a slow first quarter with Caledonia holding a 10-9 lead. In the second frame, Caledonia began to capitalize on Jenison turnovers and created a seven-point halftime lead. The offense picked up on both sides in the third quarter with 29 points combined, and Caledonia led 38-30. Jenison was held to just five points in the final frame, with the Fighting Scots pulling away. Mason McKenzie and Nick Henry led Caledonia with 12 points each, while Liam Mulnix added 11 on 3/3 from the free throw line. Jenison’s Cam Duval led the team with 12 points on four made triples.

Central Montcalm 56 Chippewa Hills 52: The Hornets traveled to Remus on Tuesday and returned home with a league victory. Fisher Hill (19) and Kaleb Crooks (14) led the way in scoring for CM.

East Grand Rapids 44 Forest Hills Central 40: The Pioneers improve to 2-0 in the OK White and 3-3 on the year with a victory over FHC. Simon Neuhaus led the way with 23 points for EGR, while Drew Caswell added 13.

Edwardsburg 67 Otsego 52: The Eddies secured a Wolverine Conference victory over the Bulldogs. Luke Stowasser scored a team-high 20 for the Eddies, while Brendan Byce (16) and Jacob Pegura (10) were also in double figures. Otsego was led by Jacob Zartman (25) and Blake Marks (11).

GR Catholic Central 72 South Christian 53: The Cougars won the battle of the two OK Gold rivals on Tuesday with a team-wide scoring effort. Jorden Brooks hit nine triples on his way to 31 points. Kaden Brown (13) and Durral Brooks (12) each were in double figures, while Luka Ressler added 4 points and 10 rebounds. Jake DeHaan was South Christian’s top performer with 18 points.

Hart 48 Kent City 36: The Pirates secured a victory over the Eagles. Kent City led 7-5 after the first quarter, and 19-13 at the break. A strong second half, including a 14-5 third quarter and a 21-12 fourth frame allowed Hart to secure a victory. Kent City was 2/11 from the charity stripe in this defeat. Parker Hovey led Hart with 17 points, 11 rebounds and 3 assists.

Kelloggsville 68 Comstock Park 41: The Rockets took down the Panthers in an OK Silver battle on Tuesday. An explosive first quarter gave Kelloggsville a 31-10 lead. The Panthers played them nearly even over the final three frames. Brandon Tuinstra (14), Camron Townsend (12), Marc Whitfield (12) and Corey Patton (11) all finished in double figures for the Rockets. Ramsey Brower (16) and Donovan Cummings (12) did the same for Comstock Park.

Lawton 45 Gobles 29: The Blue Devils set the stage for a big conference showdown with Fennville on Friday, as they took down Gobles on Tuesday night. Jake Rueff, the football star, led the team with 17 points. Chase Mitchell (12) and Cooper Geib (10) joined him in double figures.

Northview 64 GR Christian 51: The Wildcats took down the Eagles in OK White play. Kyler Vanderjagt led all scorers with 22 for Northview, while Calvin Hyde (12) and EJ Ryans (10) were also in double figures for the victors. GR Christian was led by dual 11-point games from Delon McCloud and Dono Thames.

Reeths-Puffer 56 Zeeland East 46: The Rockets captured an OK Green victory over the Chix on Tuesday night. Jaxson Whitaker paced Puffer with 20 points and 5 assists. Travis Ambrose added 16 points, 14 rebounds and 3 blocks. Kyle Schlaff hit a clutch three for the victors, and he made numerous hustle plays and defensive stops. Ian Bannach was the Chix top scorer with 12, while Will Baker added 9.

Rockford 56 Grandville 43: The Rams took down the Bulldogs in OK Red action. Jack Lamancusa had 17 to lead Rockford, while Kyle Varady (12) and Caden Pokorzynski (11) were also in double figures. Trey Johnson led Grandville with 15, while Cam Regnerus added 9.

Spring Lake 65 Allendale 55: Kaden George scored a game-high 23 points to power the Lakers to victory. Spring Lake went on a huge 12-0 run in the final frame to emerge with the win.

Zeeland West 61 Mona Shores 44: The Dux took down the Sailors by seventeen in an OK Green battle in Zeeland. Ethan Krueger paced Mona Shores with 11 points, while Keontae Richard added 8 points and 3 assists. Merritt Alderink led the victors with 22 points and 10 rebounds. Luke Bakker (14) was also in double figures, and Kylan Arnold added 9 points and 7 rebounds.