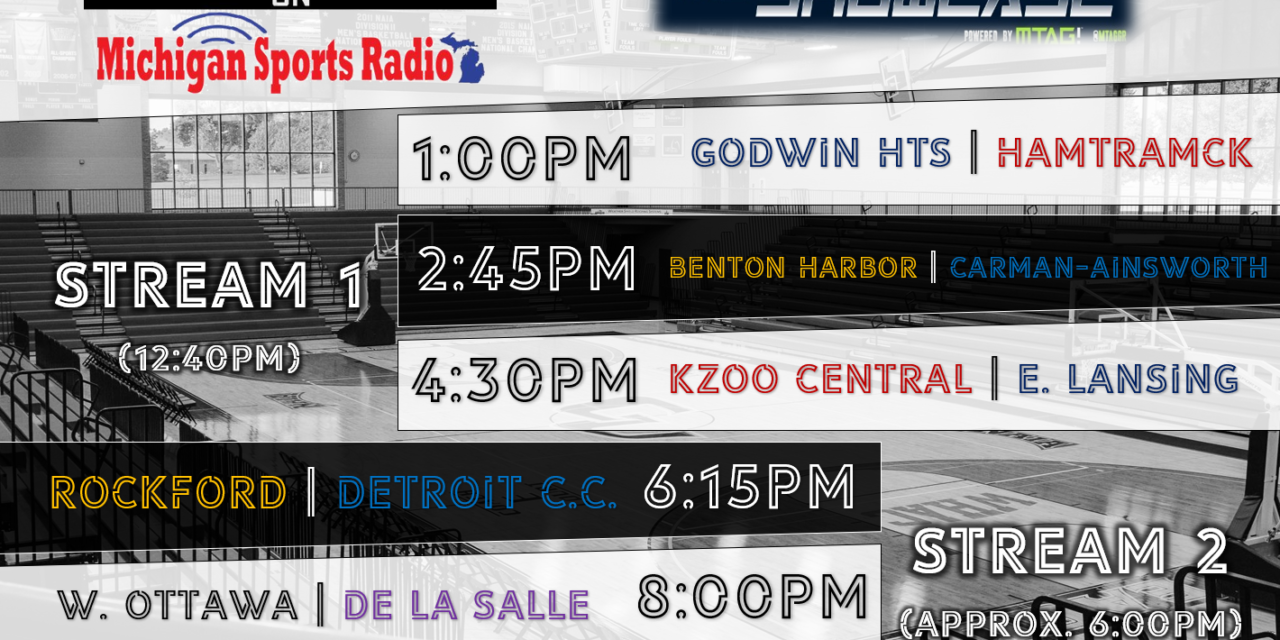 The high school basketball season is back in full swing. The first games on the boys basketball calendar will tip off on December 6. Twelve days later, fans will be treated to a full day of basketball at Cornerstone University. On Saturday December 18, The Showcase will welcome ten teams for five incredible basketball games.

Top programs across the state of Michigan will meet in Grand Rapids for an early season test. ???#AllRoadsLeadHome pic.twitter.com/F4nWQXSGX7

In the 1:00 game, Godwin Heights will face off against Hamtramck. The Wolverines were 10-1 a season ago, led by junior guard Jakhary Towns. Towns holds an offer from Morehouse College, and has taken unofficial visits to high-level in-state programs. Godwin Heights will square off against Hamtramck, who had a phenomenal 14-3 campaign last year. The Cosmos feature 5’10 junior guard Amari Allen, who has caught the attention of high-level programs with a strong sophomore year that placed him on the Detroit News All-State 3rd Team.

Following the conclusion of that game, at approximately 2:45, Benton Harbor will face Flint Carman-Ainsworth. The Tigers are one of the perennial powers on the West side. Last year, they posted a 17-3 record with a trip to the Division 2 Quarterfinals, where they lost to Grand Rapids Catholic Central. Flint Carman-Ainsworth is their opponent. The Cavaliers were 12-3 a season ago.

The midpoint of the afternoon has an intriguing battle between Kalamazoo Central and East Lansing. The Maroon Giants are another mainstay in the area rankings, as they went 10-3 in the shortened 2020-21 season. Their opponent is the East Lansing Trojans, who had a successful season last spring. Their 11-2 campaign ended in the Division 1 quarterfinals at the hands of Forest Hills Northern.

Game number four features the Rockford Rams and the Detroit Catholic Central Shamrocks. Last year, the Rams were 15-3. Their season ended in a stunning fashion against Forest Hills Central. Charlie Deutsch is one of many talented players for this Rams team. It was a tough 2020-21 season for Detroit Catholic Central, as they went 4-8, but they are two seasons removed from a narrow defeat to Emoni Bates in the playoffs. This winter, DCC is expected to bounce back with lofty preseason expectations.

Finally, West Ottawa will take on Warren De La Salle. The Panthers have been one of the most consistent programs over the last decade. In 2020-21, West Ottawa was 13-5. The Panthers will look to a strong core of experience, with Kobe Haglund and Brady Bosma back for another season. Their opponent, the Pilots, have their eyes set on returning to the Breslin Center. De La Salle was 12-4 last year, falling to Ann Arbor Huron in the Division 1 semifinals.

Event organizer Brandoen Guyton, who is also the head coach at Grand Rapids Union, had many positives to say about this December lineup. “I’m just excited that we are able to get an opportunity to have another event, after the circumstances of the pandemic last year,” Guyton shared. “It’s a great field of teams with a lot of teams that will be ranked in the preseason. This will provide a great early season test for these programs. It’s also a great showcase for players and teams to showcase their talents, as we have a group of teams that covers the entire landscape of the state.”

All of these matchups will be broadcast LIVE on Michigan Sports Radio, if you are unable to get to Cornerstone University for this quintuple-header. Nate Dreyer and Chandler Timmer will be the dynamic duo on the call for all five of these thrilling matchups.

Guyton’s series of Showcase events has three more Showcases planned. They will take place on January 8 (girls basketball), February 5 (boys basketball) and February 19 (boys basketball). The girls list of teams is listed below, while the February boys basketball events should be finalized by Friday. These will be announced on their Twitter page (@MTagGR).

Make Way for the Flying G’s!