The Frankenmuth Eagles hosted the Kingsley Stags in a Regional Championship contest on Saturday. The host Eagles claimed the Championship with a hard fought 33-18 win.

At the 6:47 mark of the first quarter, the Eagles took a 7-0 lead on a Sam Barger 30-yard run. On the first play of the second quarter, Kingsley fumbled the ball and Drew Titsworth scooped up the loose ball, rumbling 38 yards for a score. Another successful extra point by Seth Malmo gave Frankenmuth a 14-0 lead.

The Stags battled back scoring on a time consuming 13 play drive, scoring at the 4:34 mark on a Sam Goethals 1 -yard run. The Eagles were able to stop the two-point conversion attempt and held a 14-6 lead. On the ensuing Eagles possession, they turned the ball over on a lost fumble on their 22 yard line. Three plays later, Kingsley’s True Beeman ran 20 yards for the score, but again the two-point conversion failed. The Eagles took a slim 14-12 lead into halftime.

On the opening Eagles possession of the second half, Frankenmuth had a pass intercepted and Kingsley had excellent field position. It only took the Stags two plays to score on a 16-yard touchdown run by Beeman. A failed conversion left their lead at four, 18-14.

On the ensuing Frankenmuth possession, they regained the lead. Cole Lindow broke loose for a 35-yard touchdown run, and Frankenmuth led once again, 20-18. The Stags were forced to punt on their next drive, and Ashton Benkert blocked the punt. Jake Andrews recovered the ball at the Stags 21 yard line. Four plays later, Cole Jankowski connected with Hunter Leddy on a critical fourth down conversion pass that resulted in a 15-yard score, upping the lead to 27-18.

Early in the 4th quarter, Kingsley came up with a blocked punt and took possession at the Eagles 40 yard line. The Stags drove down to the Eagles 20 yard line, but Titsworth came up with a fourth down sack to stall the drive. Frankenmuth then salted the game away with an 11-play, 70-yard drive capped off by Lindow’s 18-yard touchdown run with 57 seconds remaining.

The Eagles outgained the Stags 207-171 in this game, a remarkably low total for 51 total points. Kingsley controlled the clock with a 30:23-17:37 time of possession advantage. Cole Lindow led the Frankenmuth rushing attack with 127 hard fought yards. The defense was led by Dayne Reif with 14 tackles, Floyd Atwood with 13, Travis Brenner with 11 and Drew Titsworth with 10.

The Regional Championship is the eighth in program history and the fourth in the last six seasons. Frankenmuth will play Grand Rapids Catholic Central in the semi-finals at Mount Pleasant High School next Saturday. This is a rematch of last year’s State Championship game, a contest the Cougars won 48-21. 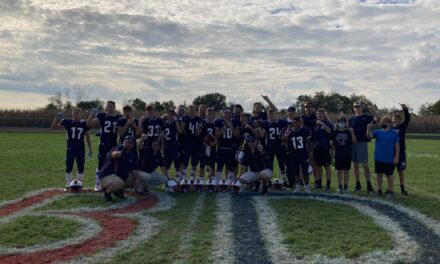