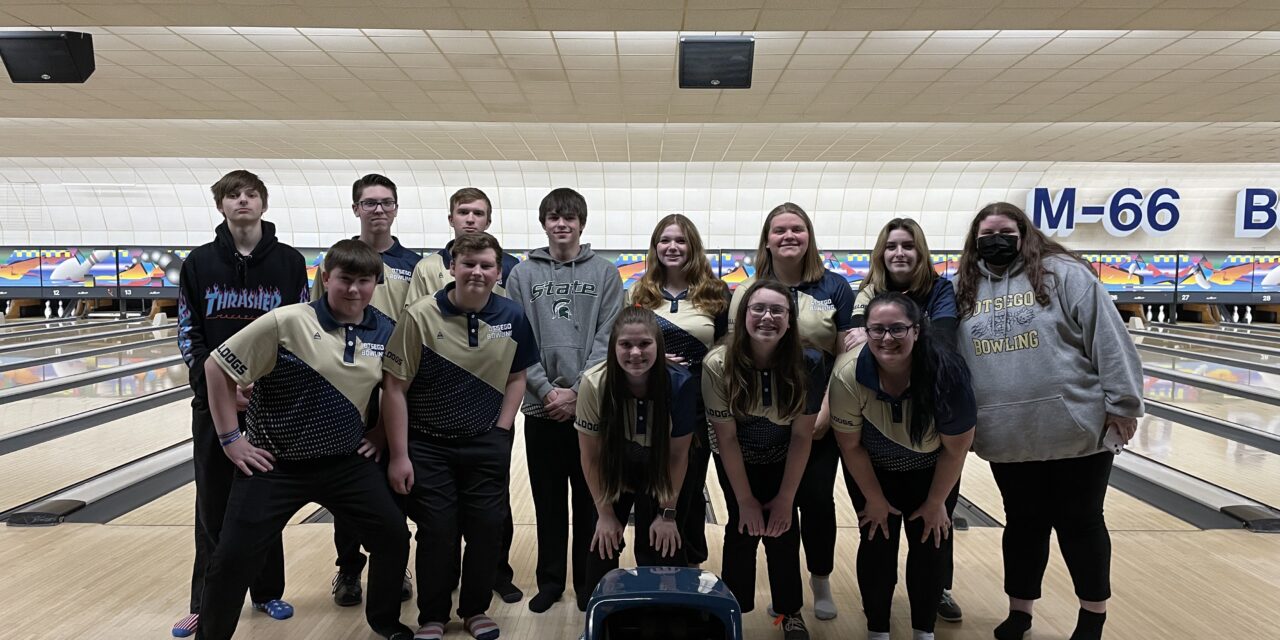 High school bowling has flooded the lanes over the past few weeks. Below are some of the highlights of action since the start of Christmas break.

Allendale 28 Wyoming 2: The Falcons secured a 28-2 victory over a depleted Wolves crew that only had three bowlers. Allendale won the Bakers 156-82 and 139-84

Birch Run 20 Frankenmuth 10: The Panthers secured a TVC victory by doubling up the Eagles. Birch Run captured the sweep in Baker Games, and they never looked back.

Cedar Springs 18 Wayland 12: The Wildcats swept the Bakers to lead 10-0 early, but they could not hang on against the Redhawks. Deven Gardner (149-169), Mark Musgrave (163-175) and Stephen Harnish (186) had Wayland’s top scores. The Wildcats lost the 10 individual games by just 135 total pins, playing very close to Cedar Springs.

East GR 18 Forest Hills Central 12: The Pioneers secured a league victory over the Rangers on Monday January 10. Michael Colombo had a great day with a 236-214 for EGR. Cam Brandstadt posted a 244 in Game 1, and Finn Moher posted a 198. FHC saw Weston Baldwin score 265 pins for the Rangers in Game 1.

East Kentwood 21 Caledonia 9: The Falcons secured an OK Red victory over the Fighting Scots on Monday. Ahead 6-4 after the Bakers, EK won fifteen of twenty individual points. Parker Lovejoy (268-192) and Bradyn Curtis (246-151) had strong performances for the victors. Caledonia was led by Alec Blisterfeldt (225-199), Nick Dykstra (212) and Ayden Sulzener (204).

Forest Hills Eastern 22 South Christian 8: The Hawks secured a win in OK Gold play. They were down 6-4 after the Bakers, before dominating the individual games. Gabe Biel posted a 169-224 series to lead the way. Jonah Whalen added a 167-178 for FHE. South Christian saw Austin Hineline post a game high 200 pins. Lucas Hineline added a 189-167 series for the Sailors.

Frankenmuth 28.5 Freeland 1.5: The Eagles dominated the Falcons in TVC play. They swept the Bakers and cruised to a victory. Cam Severs led the way with a 210, while Mayson Knop added a 196-176 series.

Otsego 16 Vicksburg 15: The rare tiebreaker bonus point came into play in this conference match. Otsego rallied in the tenth frame of the second Baker game to prevent a 10-0 sweep, instead trailing 6-4. The total pins in individual play allowed Otsego to force a 15-15 tie. The conference tiebreaker is highest Baker game, which Otsego captured.

Sturgis 23 Otsego 7: The Trojans were able to defeat the Bulldogs in Wolverine Conference action. Connor Farrish posted a 197-199 for Otsego, while Robert Phillips had 187-115. Sturgis was led by Christian Quiron (200-194), Caleb Hansen-Bohan (177-196) and Drake Harker (185-183). As a result of this victory, Sturgis remains unbeaten in Wolverine Conference play.

Zeeland 16.5 Unity Christian 13.5: The co-op Zeeland squad rallied from a 10-0 hole to secure a win over the ‘Saders. Noah VanderVelde struck big for Zeeland with a 204, and AJ Williams scored a 178. Alex Vogt (218) and Jackson Schamper (171) also had strong performances.

Battle Creek Lakeview 30 Kalamazoo Central 0: The Maroon Giants do not field a full varsity team, so the Spartans swept. Isabella Leibana (101-113) had a strong day, and Alissa Mella bowled 70 pins over her average with a 111-119 series. Nghi Dinh added a 94, while Lauren Davis led the team with a 112-128 series.

Coldwater 20 Hastings 10: The Cardinals topped the Saxons in I8 play. Ally Herder won two points with a 159-141 series, while Shyanna Baker (150) and Abby Barton (142) had strong single game scores.

East GR 24 Forest Hills Central 6: The Pioneers thwarted FHC in league play. Anna Edleman was the team leader with a 175-149 effort. Sophia Herold was consistent with a 148-150 showing. Emmey Williams scored a 141 for a game high for the Rangers.

Hastings 19 Marshall 11: The Saxons captured a league match back on January 4 against the Redhawks. Shyanna Baker captured two points with a 138-178 series. Amber Rabideau posted a season-high 228 score for Hastings, while Ally Herder added a 146-164 series.

Otsego 30 Vicksburg 0: Before their big match with Sturgis, the Bulldogs were at Bowlero Lanes for a league battle against Vicksburg. Alicyn Klok led the way with a 146-172 to propel Otsego to a sweep.

South Christian 27 Forest Hills Eastern 3: The Sailors defeated a 3-player Hawks unit with a near sweep.

Wayland 23 Cedar Springs 7: The Wildcats are undefeated in OK Gold play after defeating Cedar Springs. Wayland held a 6-4 Baker game lead, before they dominated the individual play. Bella Harnish (247-194) and Kadence Bottrall (179-165) led the way for Wayland, while Breanna Hyde (170-143) also had a strong day.

Zeeland 27 Unity Christian 3: The Birds took down the ‘Saders in convincing fashion. Ellie Drenten and Morgan Smith each posted 225 in their first individual games, and Smith added a 245 in game 2. That stellar performance started with 7 straight strikes. Rylee Smith (189) and Shanna McDonnell (182) also bowled great games for Zeeland.

Otsego was also at this event, posting a 11th place boys finish. The lady Bulldogs made the bracket, and they lost 168-163 in the third game of a best-of-three baker battle with #1 seed Grass Lake.

Hastings also traveled to the event. The boys team was unable to qualify for the bracket. The lady Saxons worked their way into the finals, where they lost. They were 5th after qualifiers, and defeated Marshall and Macomb Dakota to reach the final match. They then lost to Hartland 153-150 and 173-137 to place 2nd.

CSAA Gold Individual Event at Fremont, 1/8: Fremont Lanes welcomed the individuals from Big Rapids, Central Montcalm, Chippewa Hills, Fremont and Tri-County. Using a similar format as regionals, the Packers played well. Andrew Lyon and Gabe VanVleet each averaged 152 pins over the 6 games, with VanVleet posting a team-high 188. On the girls side, Rhiannon Ziebke led the team with a 111 average and a 144 individual game team-high.

Fruitport Invitational: The Zeeland team traveled to the Fruitport Invitational. The most success came on the girls side, where the co-op captured the crown. They placed first in the qualifying round, outscoring the competition by over 500 pins. In match play, Zeeland defeated Comstock Park and Rockford to secure the title. Alyssa Fortney, Ellie Drenten and Morgan Smith were named all-tournament.

Park Center Lanes Christmas Baker Tournament: East Kentwood was able to capture this Baker Tournament title on December 28. The Falcons were #1 after match play, and they advanced with FHC, Grand Haven and Hopkins to bracket play. EK defeated Hopkins 313-272 to advance to the finals, where they faced FHC. The Rangers topped Grand Haven 306-291 in their semifinal. In the title bout, FHC won game one 146-129. East Kentwood would dominate in Game 2, 173-88, to capture a 302-234 tournament title.

Strike Zone Singles Tournament: Sturgis took their team to the Strike Zone Singles, and they sent four bowlers (three boys and a girl) to the bracket. Drake Harker placed fifth, Owen Brewer was 7th and Blake Adamski finished 8th on the boys side. Lydia Boland was able to advance to the finals, where she lost to Bronson’s Idalia Hernandez. 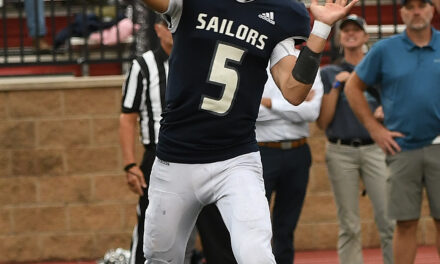