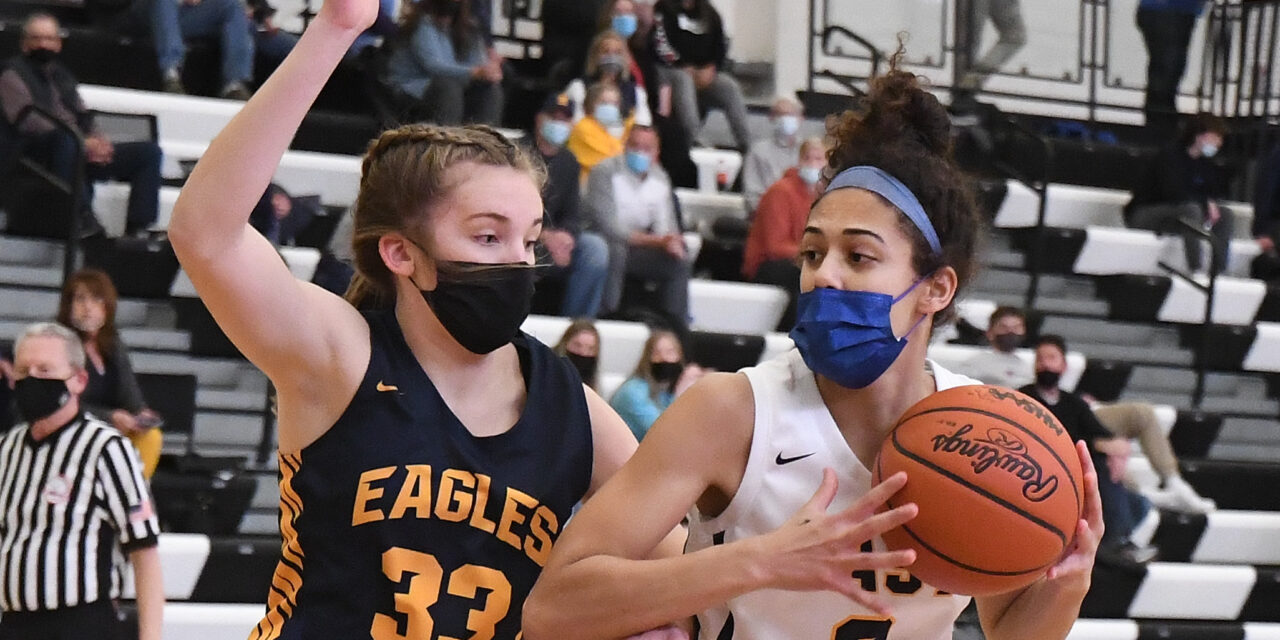 Hudsonville 52 East Grand Rapids 47: The Eagles shook off the regular season defeat against EGR, flipping the script to capture a regional championship. It was a strong performance by both teams, two of the area’s best. Jillian Brown led EGR in scoring with 20 points, while Macy Brown chipped in 9. Eva Joldersma (17) and Alaina Diaz (15) paced Hudsonville in their thrilling victory. This is the second regional championship in Hudsonville girl’s basketball history.

Escanaba 53 Ludington 35: The Eskymos captured the first regional championship in their history with a double-digit win over the Orioles. Escanaba led by eight after the first quarter, but a rally by Ludington evened the halftime score at 21. The run continued for the Orioles, creating a five-point lead, but Escanaba battled back with a 14-0 run, taking control of the ball game. They would expand on their lead in the fourth quarter.

Portland 53 Frankenmuth 49: This highly-anticipated battle between the Raiders and the Eagles lived up to its billing on Wednesday night. Portland raced out to a 21-12 lead after the first quarter, but Frankenmuth battled back. The ‘Muth had the lead trimmed to six after the third quarter, and they remained in striking distance throughout the final frame, but they were unable to get ahead. Ashley Bower led Portland with 26 points, Ava Gruber added 11, and Ava Guilford chipped in 9.

Newaygo 55 West Catholic 48: The Lions battled an undefeated West Catholic team in a thrilling regional championship game. West Catholic was without two of its top players, including Abbey Kimball, but they still fought hard throughout this contest, holding a 34-31 lead after three quarters. In the final frame, Newaygo exploded offensively. They scored 24 points in the final frame, outscoring West Catholic by 10. Jaxi Long led the Lions with 22 points, while Emmerson Goodin added 18 points and 10 rebounds.

Wayland 61 Edwardsburg 48: The Eddies got out to a hot start in the regional finals, taking a 6-0 lead two minutes in. Wayland wouldn’t be rattled, instead battling back to even the score at 12 after the first quarter. The Wildcats continued to play strong in the second quarter, and they took a 31-24 lead into the locker room. The third quarter was a battle, and Edwardsburg chipped away at the margin. Wayland led 53-48 with five minutes to go, and an 8-0 run to end the game secured a victory and a regional title.

Maple City Glen Lake 58 Hart 36: The Pirates’ ship was sunk in the regional championship game, as they couldn’t navigate past the Lakers. Glen Lake got out to an electric start, as they led 15-0 after the first quarter. Hart played an even second quarter, but that still meant they trailed by fifteen at halftime. The sting Lakers defense pressured Hart and it resulted in a five-point extension on their lead, sitting at a 50-28 advantage entering the final frame. Jayd Hovey led Hart with 16 points, while Marianna VanAgtmael added 13.

Kent City 69 Covenant Christian 23: The Eagles raced out to an 11-0 lead, and they never looked back, tripling up the Chargers on the scoreboard. Kent City led 15-6 after the first quarter, and they extend their halftime lead to twenty points at 31-11. Stellar three-point shooting paced Kent City, as they hit 14/28 shots from beyond the arc. Jenna Harrison hit six of those, finishing the game with 20 points. Lexie Bowers (14), Madelyn Geers (11), Taryn Preston (11) and Kenzie Bowers (9) all had strong performances offensively for Kent City as well.

Schoolcraft 37 Gobles 12: The Eagles captured the regional championship with a third win over Gobles this year. Once again, defense was key to Schoolcraft’s victory. Much like their 45-26 and 36-13 victories, the Eagles stifled Gobles and limited their offensive opportunities.

Martin 42 Colon 31: History was made down in Mendon, as the Clippers secured the school’s first regional championship since 1995. They battled a tough Magi squad throughout the evening, creating an early 10-7 lead. Colon won the second quarter, evening the score at 18 at the break. Martin scored 12 points in each the third and fourth quarter, allowing 6 and 7 points respectively to win by 11. Bri Warner led all scorers with 19 points for Martin, converting on 6 of 7 free throws. This was the key to Martin’s 11/15 free throw shooting performance. Cirsten Coburn added 12 points, including three pivotal triples in the second half. Martin Head Coach Ben Schipper added afterwards that “tt really was a complete team effort, which I say often about our girls. Natalie Yowler had big time rebound after big time rebound. Gracie Shettler had a hard time getting her outside shooting going tonight, but she didn’t let that phase her. We felt like her two drives to the basket right before half really broke the ice for our girls to understand we could attack the zone with the dribble. That was a big turning point for us mentally and confidence wise. Defensively, we were able to limit them to only three made threes which was our huge emphasis. It was an all around terrific performance.”

Northview Jumps Out to Lead Against Greenville, Wins Big