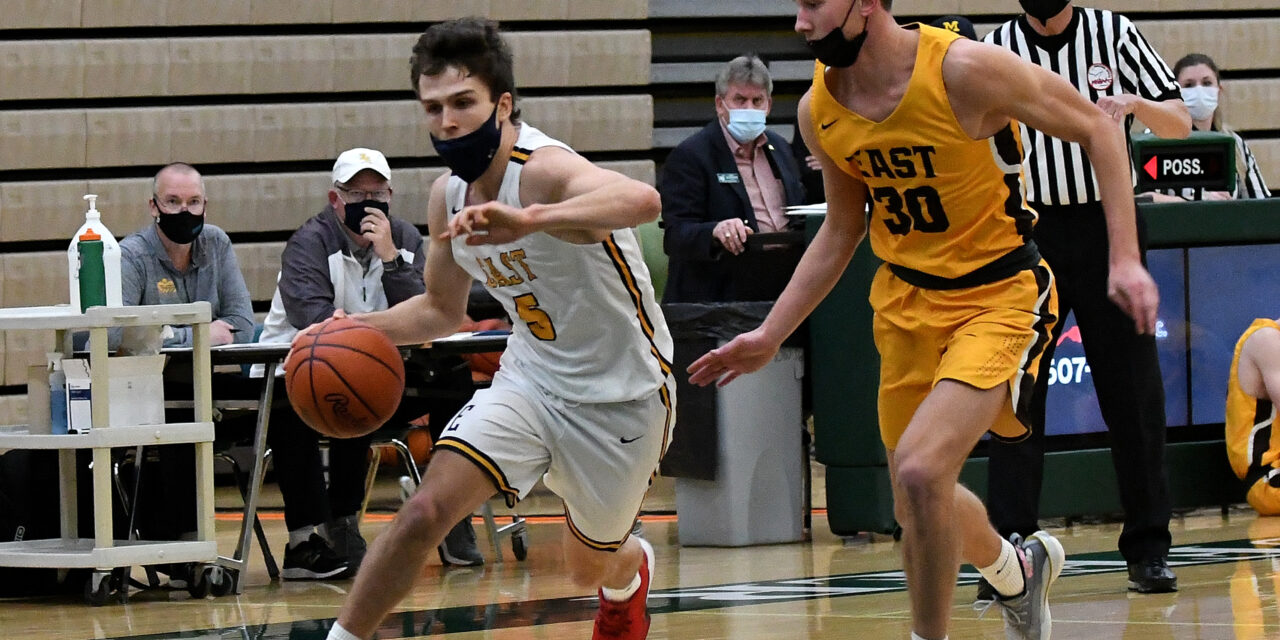 Zeeland East 49 East Grand Rapids 30: The Chix remained unbeaten, punching their ticket to the regional finals. Zeeland East led 12-8 after the first quarter, and they took a five-point lead into the locker room. In the third quarter, the Chix took flight for sixteen points, expanding their lead to thirteen. A fourth quarter victory would extend the final margin of the contest. Nate Claerbaut led Zeeland East with 24 points, while Brandon Claerbaut added 11. Simon Neuhasu led EGR with 17.

Forest Hills Northern 61 Grand Haven 57: It was a thrilling battle between the Huskies and the Bucs in the second semifinal of the night. Grand Haven led by one after the first quarter, and they maintained that lead at halftime. FHN was able to even the score at the end of the third quarter before pushing ahead in the final frame. Trinidad Chambliss led FHN with 19 points while Cole Ryhnbrandt finished with 18. Gavin Fisher was the third Huskies player in double figures with 12 points. Landon VanBeek paced Grand Haven with 13 points. Bashir Neely (11), Nic Stump (11) and Harrison Sorrelle (10) also finished with double digit scoring totals.

Escanaba 59 Boyne City 56: The Eskymos are onto the regional finals with a narrow victory against Boyne City. Jared Hanson led all scorers with 18 for Escanaba.

Ludington 67 Ogemaw Heights 49: Ogemaw Heights got out to a 15-9 first quarter lead, but the Orioles responded with a 26-5 second quarter to create a fifteen-point halftime advantage. Ludington won the second half by three, allowing them to advance to the regional title game. Peyton LaCombe led the Orioles with 17 points, while David Shillinger chipped in 16. Hudson Hodgins led Ogemaw Heights with 23.

GR Catholic Central 68 South Christian 50: The Cougars completed the season sweep of the Sailors, defeating South Christian on the Sailors’ home floor to punch their ticket to the regional finals. After the first quarter, South Christian led 11-8. GRCC would jump back in front at halftime, but South Christian got back in front early in the third frame. Once GRCC took the lead back, they never looked back, exploding offensively over the final ten minutes of action. Kaden Brown led GRCC with 23 points, while Durral Brooks (15) and Luka Ressler (12) joined him in double figures.

Hopkins 51 Parchment 45: The historic run for Hopkins continued, as the Vikings advanced to their first regional championship game since 2001. Colin Weber was the star of the show, as the Charlotte football commit scored 37 points for the victorious Vikings.

Beaverton 74 Mason County Central 51: The clock struck midnight on West Michigan’s Cinderella story in the regional semifinals. The Spartans, who won as many games in district play as in the regular season, were unable to get past undefeated Beaverton. The Beavers got out to a 21-11 first quarter lead, and a 22-8 second quarter edge created a large halftime lead. MCC outscored Beaverton in the second half 32-31, but trailing by 24, it was too much to overcome. Trent Reed led the Beavers with 25 points and 13 rebounds, while Carson Oldani added 22 points and 11 boards. MCC was led by Will Chye (17 points), Zach Draper (14) and Jayden Perrone (11).

Covenant Christian 67 Pewamo-Westphalia 58: This regional semifinal contest was started with a hard fought 1st quarter. PW took off in the 2nd quarter and they were able to open up an 11 point lead at halftime, 31-20. They would maintain and open up that lead in the 3rd quarter before Covenant Christian started burying jump shots to storm back even. Ethan Scholten would be the star of the 4th quarter for the Chargers, as he came off the bench and knocked down back-to-back threes, a big steal and clinching free throws to lead Covenant to a comeback victory.

North Muskegon 63 Ithaca 60: The second regional semifinal in region 19 featured frantic action throughout the entire night.  Troy and Brennan McManus led the offensive charge for North Muskegon with red hot three-point shooting. North Muskegon, who averaged 45 points per game on the year, led 39-24 at the half. Ithaca would come all the way back to tie the game at 50 after the 3rd quarter. The fourth quarter was back and forth, with both teams having a shot at the ballgame. Down by three points, Ithaca had a decent look at a deep three-pointer to tie at the buzzer, but Brendan Wood’s shot missed wide left and North Muskegon held on to win. Troy McManus led North Muskegon with 22 points, while Brennen McManus added 18. Brandon Wood paced Ithaca with 20 points, while Gibson Mar chipped in 16.

Northview Scores Early and Often in Win over Ottawa Hills