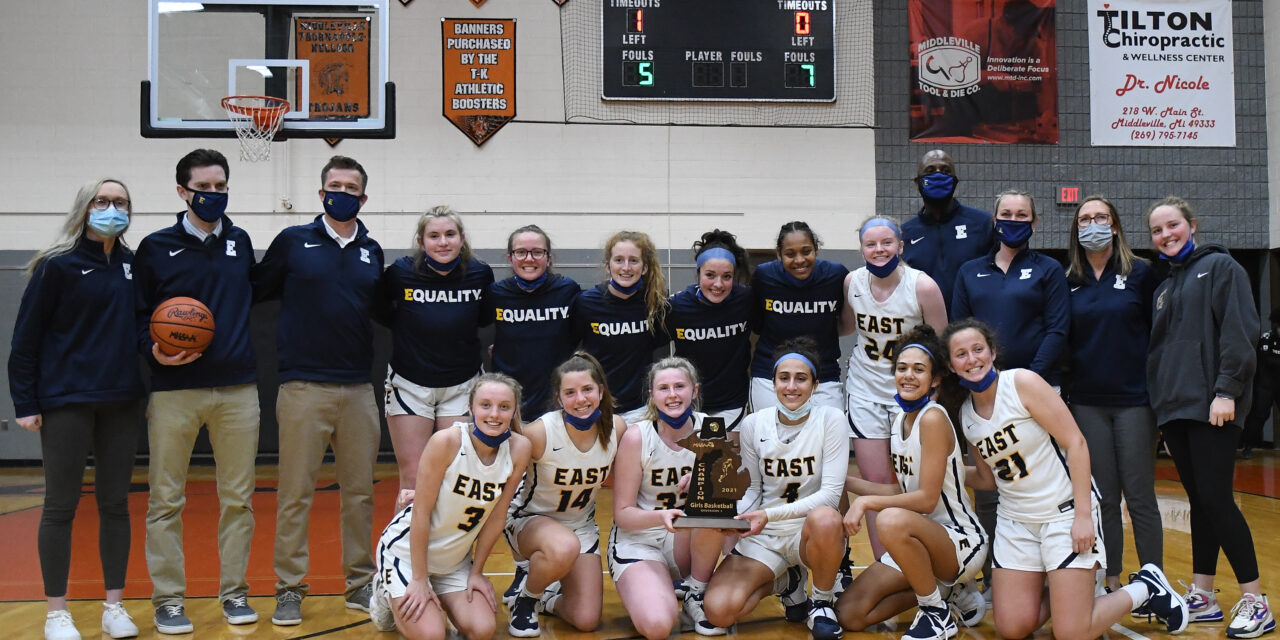 Rockford 63 Lowell 48: The Rockford Rams captured a district championship with a fifteen point win over the Red Arrows. Lowell got out to an 18-8 lead after the first quarter, but a second quarter offensive attack pushed Rockford ahead 29-26 as the teams went to halftime. The Rams won the third quarter as well to extend their lead to five points. A 23-point fourth quarter propelled Rockford to the convincing victory. Alina Anderson scored 18 points for Rockford, Elle Irwin added 13, and Grace Lyons chipped in 8. Braxcynn Baker led Lowell with 20 points, and Piper Risddon added 10.

East Grand Rapids 51 East Kentwood 50: The game of the night lived up to its hype, and the Pioneers captured a district title in a one-point game. The first quarter saw a heavy whistle, as twelve fouls were called and the game was tied at 16. EGR led 31-26 at halftime after going on a 5-0 run in the final 1:43, starting with a technical on the EK coach. EGR pushed their lead to four after the third quarter, but the Falcons went on a 4-0 run to even the score with 6:30 to play. A steal by Macy Brown led to a go-ahead basket for EGR. EK rallied to jump ahead by one, but with 1:45 to play, Ali Carlson floated in a bucket to put the Pioneers ahead 51-50. The Falcons had chances to take the lead, but they could not convert. Jillian Brown led EGR with 28 points, Ali Carlson added 8, and Macy Brown and Mikayla Rutgers chipped in 7 each. Both Madi Tillman and Keliese Christopher paced East Kentwood with 15 points, while Alexis McCully tossed in 10 points.

Mona Shores 59 Union 44: The Sailors secured the district championship on Friday with their third win of 2021 against the Red Hawks. After the first quarter, Mona Shores led by one. They won the second quarter 20-13 to take an eight-point lead to halftime. They won both of the second half quarters as well, extend the lead to its final tally. Riley Rosenthal and Olivia Sobczak each scored 13 points, while Bri Wade added 10. Mona Shores also got a strong performance from Brooke LeRoux (7 points). Union was led by Z’yna McSpadden with 11 points.

Ludington 50 Cadillac 46: The Orioles and Vikings went to overtime, but Ludington was able to emerge victorious with the district championship trophy in hand. Keelyn Laird led the Orioles with 13 points, while Hailey Stowe added 10. Molly Anderson paced Cadillac with 21 points.

Standish Sterling 61 Clare 36: The Panthers secured their third straight district title with a convincing win against Clare. Standish Sterling got out to a 16-3 lead after the first quarter, and they cruised to victory. Macey Fegan led the Panthers with 20 points, 12 rebounds and 6 assists. Elle Adrian scored 10 points and recorded 12 rebounds. Her first basket lifted her past the 1,000 career point plateau. Kylie Wendell was the third Panther in double figures with 11 points.

Portland 57 Belding 33: The Raiders secured a district championship with a victory over the Black Knights. Portland created an 18-4 first quarter advantage and never looked back. Ashley Bower paced the Raiders with 23 points, Ava Guilford added 12, and Alivia Densmore chipped in 10. Ashtyn Cegelis and Brook Simpson each scored 15 points for Belding.

Freeland 38 Bay City John Glenn 36: The third time was the charm for Freeland. After two defeats against John Glenn in the regular season, they got the best of the Bobcats in the district championship showdown.

Frankenmuth 73 Bridgeport 49: The Eagles’ dominance against TVC opponents continued in Friday’s title game. They improve their record to 15-0 against TVC foes, including 3-0 against Bridgeport as they cruise to the district title.

Montague 48 Whitehall 36: The Wildcats got out to an 11-2 lead, but Whitehall rallied to bring the margin within three, 16-13 after the first quarter. Both sides stepped up defensively in the second quarter, and Montague’s lead was just two points, 21-19 at halftime. After an opening bucket by Whitehall, the Wildcats scored fourteen straight points to jump ahead 35-21 midway through the third quarter. Whitehall played strong in the fourth quarter, but they could not overcome the deficit. Ally Hall led the undefeated Montague crew with 10 points, Andie Zamajcin and Kendall Osborne each chipped in 8, and Braquelle Osborne finished with 7 points.

Newaygo 44 Sparta 31: The Lions and Spartans played in a true tale of two halves in their district title matchup. Sparta got out to a 23-18 halftime lead, but Newaygo flipped the stretch in the second half, outscoring the Spartans 26-8. Jaylee Long led the Lions with 17 points, 5 rebounds and 5 assists. Emmerson Goodin added a final line of 9 points and 9 rebounds. Kayla Fisk finished with 4 points, 9 rebounds and 6 deflections.

West Catholic 50 Hamilton 27: The game started close, as West Catholic only led 11-10 after the first quarter. The defensive prowess continued, as the Falcons’ halftime lead was 23-16. A 27-11 second half burst lifted West Catholic to their championship, their second consecutive district crown.

Wayland 62 South Christian 55: The Wildcats got their second win of the year against South Christian, this time an overtime thriller that resulted in a district championship. These two teams battled all night long, and the game was tied at 45 entering overtime. In the extra period, Wayland exploded for 17 points.

Plainwell 42 Otsego 39: The Trojans won the Wolverine Conference rubber match and the district championship on Friday night against the Bulldogs. Plainwell jumped out to an eleven point lead at halftime, but Otsego battled back in the second half. They got the deficit down to one possession, but they were unable to draw closer.

Western Michigan Christian 51 North Muskegon 17: The Warriors were in control early in this game, and they continued to accelerate on their way to a district championship. WMC led 26-6 at halftime before going on a 23-2 third quarter run to extend their lead to forty-one points. North Muskegon won the fourth quarter, but it would not be enough.

Kent City 63 Morley Stanwood 32: The Eagles captured their fourth straight district crown, completing the three-game season sweep of Morley Stanwood in the process. Kent City got out to a 32-13 halftime edge, and they built on that in the second half. Kenzie Bowers led the way with 21 points on her birthday, while Lexie Bowers added 19 points on 5/7 shooting from beyond the arc. Madelyn Geers was also in double figures with 12 points.

Gobles 44 Bloomingdale 38: The Tigers captured their second straight district title with a win over the Cardinals. Gobles was led in this game by Amanda Barber (24 points) and Karlee Henderson (10 points, 8 rebounds).

McBain Northern Michigan Christian 51 Mason County Eastern 21: The Comets and Cardinals were close after the first quarter, with NMC holding a 10-8 edge. The second quarter, 16-2 in favor of NMC, created separation on the scoreboard that could not be overcome. Megan Bennett led NMC with 17 points, while Paige Ebels added 11. Corinna Hernandez led MCE with 6 points.

Walkerville advances to the regionals after defeating Muskegon Heights in the semifinals; Muskegon CC withdraws due to COVID issues.

Martin 39 Zion Christian 22: The Clippers secured their fourth straight District Championship, topping the Mountaineers by seventeen points. Natalie Yowler’s 10 points in the first quarter helped Martin get out to a 14-6 lead. They would win the next two quarters to push the lead to 17, before tying the final frame. Yowler was joined in double figures by Gracie Shettler (13) and Makala Goddard (10). Zion Christian was led by Kelly Leep, who finished with 12 points. Martin Head Coach Ben Schipper afterwards remarked that they “were locked in from the very beginning tonight. This was one of our most complete games all year. We took care of the ball, handled pressure, got our posts involved, and clamped down defensively. Playing bigger schools night in and night out in conference play absolutely prepared us for the playoffs. We had a lot of learning moments early on in the season, but we have grown from each one and we are playing our best basketball at the right time, which has been our goal all along. It’s been great to see our two seniors really turn it on these last 3 games. Bri just won her 4th district championship. Can’t imagine there are too many players in the State who can claim that accomplishment.”