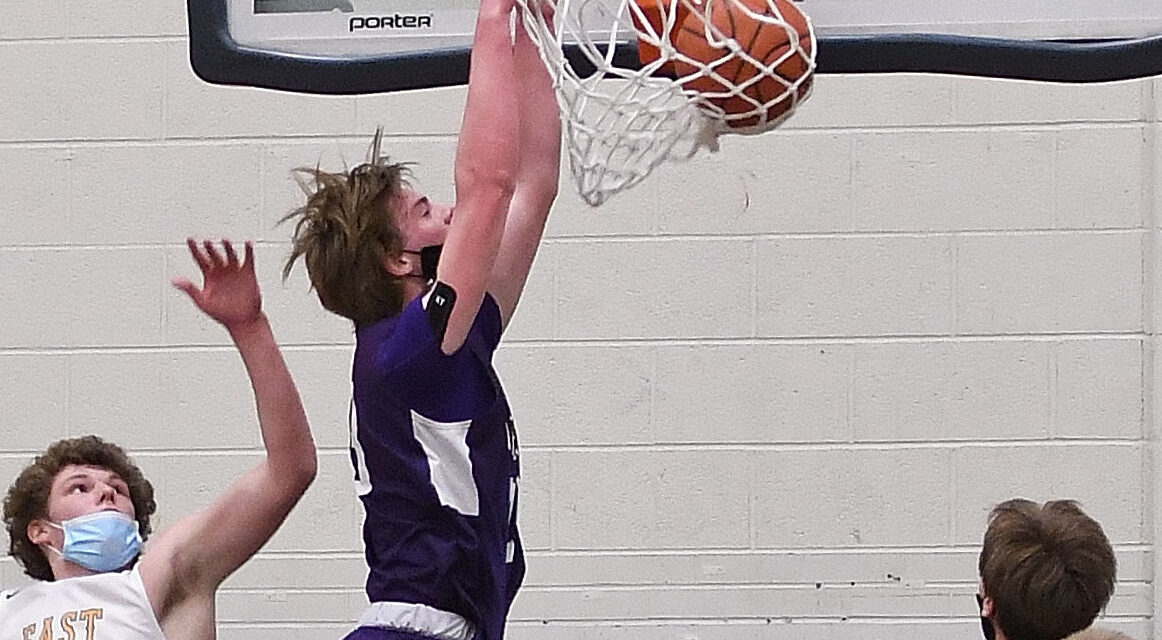 Forest Hills Northern 62 Forest Hills Central 54: The third battle of the Huskies and Rangers was a thriller, with FHN ultimately capturing a district title. FHN led 15-11 after the first quarter, but seven straight points from Dallas Hopson propelled the Rangers to a halftime lead, 30-27. The teams played even in the third quarter, with Connor Milton’s tip-in at the buzzer giving FHC a 43-40 edge with eight minutes to play. Within four minutes of the quarter, FHN went on a 12-4 run to capture the lead. An explosive run, spearheaded by Ethan Erickson, pushed the Huskies lead to 12 with two minutes to go. FHC fought back, but they could not close the gap. Ethan Erickson led FHN with 19, while Gavin Fisher added 12. Connor Milton scored 17, while Dallas Hopson added 14 for FHC.

Grand Haven 66 Muskegon 51: The Bucs dealt Muskegon head coach Keith Guy his first ever district playoff defeat on Saturday, snapping a 16-year championship streak for the head coach (Muskegon Heights and Muskegon combined). Grand Haven led 14-8 after the first quarter, and they pushed the halftime lead to 10 points. They continued their roll in the third quarter, and they sat ahead 45-27 heading into the final frame. Grand Haven clinched their first district title since 2012 thanks to Harrison Sorrelle (20 points) and Landon VanBeek (12 points).

Zeeland East 33 West Ottawa 20: Defense was the name of the game in District 11’s title match, as the Chix remained unbeaten at 18-0. After the first quarter of play, Zeeland East led 8-0. West Ottawa’s offense came to life in the second quarter, but they still trailed 13-10 at halftime. The Chix stepped up once again defensively, holding West Ottawa to two points in the third quarter. After a strong fourth quarter, Zeeland East captured their first district title since 2009. Nathan Claerbaut led ZE with 14 points, 15 rebounds and 5 shots. Trip Riemersma added 8 points, while Brandon Claerbaut chipped in 6.

East Grand Rapids 43 Caledonia 40: The Pioneers captured the district championship, outlasting Caledonia on Saturday afternoon. After the first quarter, the Fighting Scots led by 3, 11-8. EGR was getting good looks, but they could not get them to fall. Jackson Seufert and Brandon Tueinstra provided a spark off the bench for the Pioneers in the second quarter, and they took a 21-18 lead into the locker room. The teams played a nearly even third quarter, with EGR taking a 32-30 edge into the final frame. The Pioneers got off to a 9-1 run, creating a 41-31 advantage with 3:25 to play. Caledonia responded with seven straight points, including an and-one by Andrew Larson, trimming the lead to 41-38 with 1:10 to go. After one made free throw, Caledonia went down and made a lay-up to pull within two points. Caledonia would get the ball back down by three, with a chance to tie the game. They moved the ball around and Larson had an open look to tie, but the ball bounced in and out, with time expiring. Simon Neuhasu led EGR with 11 points and 5 rebounds, while Arjun Taylor added 9 points. Koby VanderWoude led Caledonia with 10 points, all coming in the third quarter.

Ludington 37 Cadillac 35: The Orioles and Vikings battled all night long, but a buzzer-beater by David Shillinger carried Ludington to victory. Ludington led by five at halftime, but they only scored two points in the third quarter, resulting in a three-point deficit entering the final frame. They got within a point when Shillinger was the hero. He scored 12 points, while Peyton LaCombe led the team with 17. Cole Jenema topped the Cadillac scorebook with 23 points. (LINK FOR VIDEO OF BUZZER BEATER)

Bridgeport 53 Frankenmuth 33: The Bearcats got revenge on their regular season defeat and topped Frankenmuth in Saturday’s district championship game. They built a 14-5 lead after the first quarter, and they extended the halftime lead to 27-12. Defensively, Bridgeport held Frankenmuth to 28% shooting from the field. Jaylen Hodges led Bridgeport with 15 points, while Riley Roy matched that total for Frankenmuth.

Spring Lake 54 Whitehall 43: The Lakers stunned the Vikings to capture the district championship. Whitehall jumped out to an 11-4 first quarter lead, but Spring Lake won the next two quarters to event the score at 31. Spring Lake’s offense exploded in the fourth quarter, outlasting Whitehall 23-12 on their way to the title. Despite 29% shooting from the field and 22% shooting from deep, Spring Lake was 22/27 (81%) from the charity stripe. Dayton Cole led Whitehall in defeat with 20 points and 9 rebounds.

Coopersville 95 Fremont 53: The Broncos have been playing tremendous basketball since February 25, winning 11 of their last 13 games. This continued on Saturday with a dominating performance against the Packers. Blake Stewart led Coopersville with 25 points, while Travis Rosel added 18.

Grand Rapids Catholic Central 71 Unity Christian 52: The Cougars improve to a perfect 15-0, capturing a district championship in the process. They bolted out to a 37-21 halftime lead, but Unity was able to get within seven points. GRCC captured their fourth straight district championship with a strong finish over the remainder of the second half. Kaden Brown (23) and Jorden Brooks (20) led the Cougars in scoring.

South Christian 62 Grand Rapids Christian 54: The Sailors secured a district title for the third straight year, taking down their rivals. They built a 34-23 lead, and although GRC would make a few runs to trim the deficit, South Christian never relinquished their advantage. They now look to avenge their only losses of the regular season when they face GR Catholic Central in the regionals.

Hopkins 51 Wayland 49: The Vikings won their first district title since 2002, edging Wayland by a basket. The teams battled back and forth, but Hopkins emerged victorious in the end. Tristen Perry led Hopkins with 23 points.

Mason County Central 55 Hart 31 (Final on Thursday): The Spartans secured a district championship by edging the Pirates in a WMC rematch. Hart won twice in the regular season by double digits, but MCC got revenge and a championship. MCC led 28-24 at halftime, and they put on an offensive fury on the scoreboard to emerge victorious. MCC was 1-12 entering the postseason, winning two games in the playoffs thus far.

North Muskegon 36 Holton 20: The Norsemen and Red Devils played in a defensive battle. The style of play benefitted North Muskegon, and they won the district championship as a result. After the first quarter, NM led 8-5. Their lead was doubled to six points at halftime, and it expanded in the second half. Brennan McManus led the Norsemen with 14 points, while Will Gallo chipped in 10. Wyatt Monnette led Holton with 10 points, while Aidan Poling had 5 assists.

Covenant Christian 61 Fennville 47: The Chargers won their second matchup against the Blackhawks this season, both by fourteen points. Last time, it was 60-46, and this time they took home the district championship.