The Tri-County Vikings took to the road on Friday night, where they faced the Fremont Packers. Entering this game on a sixteen-game losing streak, Fremont had nothing to lose when they took on the Vikings. After spotting Tri-County three touchdowns, Fremont did not roll over. Instead, they fought and clawed their way back into this game, ultimately losing by just eight points, 20-12.

In the first quarter, Tri-County got the scoring started when Nate Lovell plunged in from a yard out. The two-point conversion run by Trent Behrenwald was successful, moving the score to 8-0. On their next drive, Lovell struck again when he ran another one in from a yard out. Before the first quarter ended, John Nelson took to the air and he found Cam Friend for a thirteen yard touchdown. This made it 20-0 Vikings after just twelve minutes of action.

The second quarter was nearly scoreless, but with fifty seconds left, Payton Mansfield ran thirty eight yards for a Fremont touchdown. This brought the Packers within fourteen, 20-6, as they went to half.

In the second half, only one touchdown was scored. Mansfield took to the air and found Gabe Van Vleet for a five yard touchdown to make it 20-12 Packers with seven minutes to play. Unfortunately for Fremont, they would not get any closer, suffering their seventeenth consecutive defeat.

Tri-County had a balanced offensive attack with 153 passing yards from John Nelson and 173 on the ground from four different ball carriers. Nate Lovell spearheaded that attack with 95 yards. Cam Friend was a dynamic receiver for Tri-County, as he had 144 of the team’s 153 yards.

Fremont was led by Payton Mansfield, who accounted for all of the team’s offensive yardage. He passed for 26 yards and ran for 171. In fact, his 197 yards of offense outperformed the team, as Fremont finished with 194.

This is the third straight year that Tri-County has opened with a 2-1 record. They will look to improve to 3-1 for the first time since 2005 with a victory next week against Central Montcalm. This game will take place in Stanton, broadcast LIVE on Michigan Sports Radio. 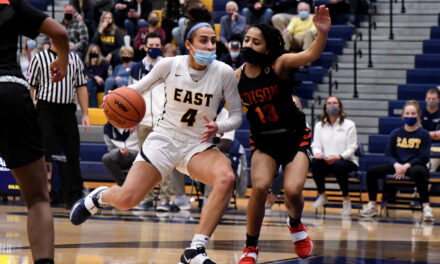