The Cass Tech Technicians trekked over to the Lakeshore on Friday night, paying a visit to historic Hackley Stadium to take on Muskegon. Their lengthy drive home will be quite happy, as the Technicians dominated Muskegon, one of the state’s best programs, 49-14.

Cass Tech started with the football, and they marched 64 yards down the field. Leeshaun Mumpfield tossed a 5-yard pop pass to Khamari Anderson, and just four minutes in, it was 7-0 Cass Tech. Mumpfield would throw another touchdown on their ensuing drive, as he found Nate Briggs for a 20-yard touchdown strike. After a Big Reds fumble flipped the field, Tyrone Gaines marched the final five yards to give Cass Tech a 21-0 lead just eleven minutes into the game.

Mumpfield continued his hot start in the second quarter, as he paired up with Latrell White on a 20-yard touchdown. On their next possession, Mumpfield found Jemeel Gardner Jr on a 29-yard touchdown strike, pushing Cass Tech’s lead to 35-0. Muskegon would finally get on the board before halftime, with Myles Walton scoring on a short quarterback run.

On the final play of the first half, Mumpfield and Kaden Wilson connected, Mumfield’s fifth passing touchdown of the first half. This gave the Technicians a 42-7 halftime lead, meaning that the running clock would be in effect.

After a scoreless third quarter, Cass Tech scored one final time in the fourth quarter. Muskegon muffed a punt return, and the Technicians fielded the ball and advanced five yards into the end zone. Jakob Price would end the scoring run with Muskegon’s second touchdown, a 64-yard sprint.

The Big Reds, now 1-1, begin OK Green play next week with a tall test against Zeeland West. Cass Tech has a challenge in their own slate, a PSL opener against Detroit King. 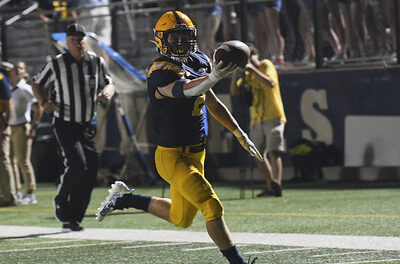