The Frankenmuth Eagles have shown throughout the 2022 season why they are one of the top teams in Division 5 in the state of Michigan. Each week comes, and each week goes as the Eagles have cruised over each opponent they have faced this season. Unbeaten on the year, they would look to continue those same ways against a team they beat earlier in the season in the Swan Valley Vikings. The Vikings come in as hot as ever. Since their week 2 loss to the Eagles, Swan Valley has rattled off 7 of 8 with a little bit of payback on their mind Friday night.

Both defenses would force punts in their first possessions of the night. It wouldn’t take long before Frankenmuth would jump on the board on their second drive of the game. Midway through the 1st quarter, Griffin Barker would find his way into the endzone from 5-yards away. Will Soulliere would add the PAT giving the Eagles an early 7-0 lead. The Swan Valley offense would start to move the ball a bit before a Travis Brenner INT would give the Eagles more momentum. Still after one, it would be just a 7-0 lead for the home team.

That would change quickly in the 2nd when Aidan Hoard would find his way in on a 2-yard TD plunge. Frankenmuth would take a 14-0 lead after another Soulliere PAT. The Eagle defense was nasty early on in this one. The Viking offense couldn’t get much going with the Eagles being in their backfield after nearly every play. The Eagles would take advantage on their next drive. Hoard would find his way into the endzone again making it a 21-0 game with plenty of time remaining in the half. The Swan Valley offense would stall on their ensuing drive but their defense would get their offense with plenty of time to put a drive together. They would be forced to go for a 4th down attempt late in the half but it would be for not. The Eagles would put more points on the board to end the half after a Soulliere 35-yard FG. It would be all Eagles after one half, 24-0.

The Vikings would get the ball to start the 2nd half. After putting together a drive that would end up with points, the Frankenmuth defense would for a turnover on downs to give the ball back to their offense. Frankenmuth would look to put the game away midway through the 3rd before coughing up the ball deep in Vikings territory giving life to the visiting team. The next drive would be interesting. Swan Valley would put together a drive looking to get back into the game before some questionable calls came into play. It would be a drive that would result in a coach ejection. Nothing would come of it though as the Eagles would hold on to a 24-0 lead after three quarters of play.

Swan Valley just wouldn’t quit in this one. Payton Guilbeaux would come up with an INT that would be one of the best plays that one might see in high school football. The Eagles defense would just be too much throughout this one. Frankenmuth would get the ball back and grab their first score of the 2nd half when Zak Andrews saw daylight from 48-yards away that would give the Eagles a 30-point lead before a Soulliere PAT. That’s where this one would end. Frankenmuth remains undefeated on the year and grabs another district title, 31-0.

The Frankenmuth offense would pile up 383 yards of total offense on the night. The defense would hold a potent Viking offense to just 177 yards through four quarters. Aidan Hoard led the rushing attack with 88 yards on the night. Griffin Barker would finish with 83 yards rushing. Swan Valley loses a lot of vital pieces heading into the offseason. They’ll return a group, however, that has the ability to put together another successful season in 2023 led by young QB Colten Klein.

The Eagles will now move on with a right to play in regionals. They will await their next opponent when Flint Hamady takes on Marine City tomorrow night. Both of which could give the Eagles a battle. Hamady has put together a 9-win season has 3 wins over playoff teams, one in which came in a thrilling 1-point win over Armada last week. They also hung around against a very tough Charlotte team. Marine City might have an even better resume and is led by a potent offense that puts out a tune of over 40 points per game on the season. Whoever it is, it looks the Frankenmuth is ready as they have no indication of slowing down. 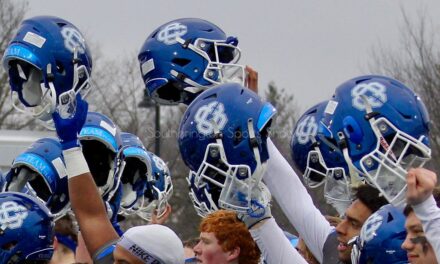