The Fennville Blackhawks concluded their 2021 campaign on Friday, taking on the Tri-Unity Christian Defenders. For the first time since 2018, the Blackhawks secured a winning record. They earned a 62-32 win over the Defenders.

Ben Peterson had another phenomenal game directing the Fennville offense. He completed 15/25 passes for 477 yards and seven touchdowns. Peterson added 104 yards and two touchdowns on eight carries. All nine touchdowns scored by the Blackhawks involved Peterson.

Makai Weimer chipped in 7 tackles and a pass deflection. Corey Callejas secured an interception. Nathan Griffin had five tackles for the Blackhawks’ defense.

Fennville’s victory improved the team’s record to 5-4. After an o-3 start, they won five of their last six games. “Our seniors have been through so many ups and downs throughout their four years and tonight they left it all out on the field,” Fennville Head Coach Richard Roth shared afterwards. “They set a great trajectory for us and we’re looking to build off that foundation.” 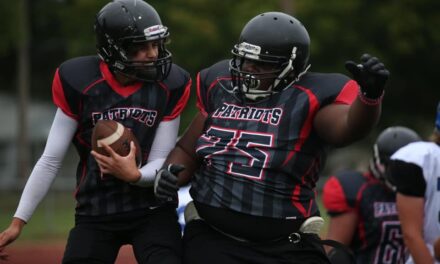