Holland Christian traveled to Allendale to face the Falcons. The Allendale Falcons entered the game in desperate need of a win. During conference play, they have only managed to win one of their matchups. The Maroons were also in the sight of another win with playoffs coming in two weeks. The Falcons fought hard and came out on top Friday night.

The Maroons and Falcons traded scores for what seemed to be all night. It began in the first quarter when Allendale was able to find the endzone. Tyler Sparks spotted an open Noah Brose for a short pass. This was quickly followed by the Maroons in the beginning seconds of the second quarter. Connor Smits was able to catch a 4-yard throw from Eli Boyce over the goal line for six. The Maroons were able to take the lead after a successful PAT, while the Falcons missed theirs. This lead disappeared 39 seconds later when Nolan Spencer was able to split the Maroon defense and run for 80 yards.

It looked to be a pretty evenly matched game, but the Falcons were able to sneak into the endzone before the Maroons could again. These six points came from a rushing Tyler Sparks. However, Holland Christian didn’t let this double-digit lead last for long. Boyce was able to find Ethan Abberger for 40 yards to close out the first half.

The quarter after the break was a quiet one with only a field goal being scored by the Falcons. This came from Kyle Rosser who previously missed two of his three PATs. This was followed by another touchdown from Sparks for his second of the night. This one was a 48-yard haul to the house. The Maroons didn’t give up quite yet only being down two scores and enough time on the clock. With 5:49 left on the clock, the Maroons made it a one-score game after Boyce was able to find Luke Michmerhuizen for a 20-yard bullet. However, all this effort wasn’t enough as the Falcons won 28-21 as the whistles blew.

For the final week of the regular season, the Maroons will travel to Fruitport who currently sit 5-1 in the OK Blue. They just took down Hamilton in blowout fashion and handed West Catholic their first loss of the season a week ago. The Allendale Falcons will look to get their third conference win against the winless Hamilton Hawkeyes. 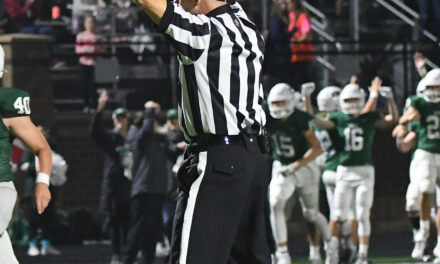