The Alma Panthers suffered a couple tough losses to start the year. After nearly grabbing one against Shepherd in week one, things did not get easier for them last week against a Freeland team that is clicking on all cylinders. Bay City John Glenn suffered their first defeat last week against a stout Birch Run team. This would be one in which both teams were looking to get back on track.

Alma would get a huge momentum shift in the 2nd quarter. That’s when Delvon Pascoe Ward Jr. would come up with a fumble recovery that he would take all the way to the house, a 59-yard score. Alma would take a 14-7 lead after a successful 2-point conversion. The Panthers would strike again, as the duo of Rosales and Sutherland would connect, this time on a 22-yard touchdown pass. Alma would head into the locker room in a flurry after another successful 2-point try would give the Panthers a 22-7 lead at the half.

The Panthers would pick right up where they left off in the 3rd quarter. Rosales would find the end zone on his own this time, a 1-yard touchdown plunge. The Alex Reyes PAT would give Alma a 29-7 lead. This one would unravel even more for the Bobcats, as Rosales would find a new target. This time he hit Dom Albaugh for 13 yards and a score. This would be Rosales’ 4th touchdown on the night, giving the Panthers a 36-7 lead.

The Bobcats would finally get their offense going in the 4th when they cut the lead to 36-15 after a 35-yard touchdown run and successful 2-point try. Alma was hungry for more though when Rosales would throw his 4th touchdown pass of the night, pairing up with Pascoe Ward Jr., giving the Panthers a 43-15 lead.

John Glenn would finish the scoring in this one with a 6-yard touchdown run. Their 2-point try would be good, but it just wouldn’t be enough in this one. Alma grabs their first win of the year in a 43-23 win over John Glenn.

Quarterback Sam Rosales had himself a night. The senior accounted for 5 of the Panthers touchdowns, with 4 through the air and the other on the ground. Much of his handiwork was through the air as he went 19/29 passing, for 320 yards. Junior wideout Cade Sutherland had himself a night to remember as well, with 10 catches for 185 yards and 2 touchdowns. Sam Couch had 2 catches for 54 yards, and 4 tackles on defense. Delvon Pascoe Ward Jr. would have two touchdowns in this one. The Bobcats were able to run for 211 yards, but just found themselves having to dig out of an early hole.

Alma moves to 1-2 on the year overall, and 1-1 in TVC play. They’ll be tasked with facing a Birch Run team who will not be in a pleasant mood after a tough Friday night loss to Frankenmuth. The Panthers moved to 2-1 overall and 1-1 in conference play. Alma heads to Birch Run where the two will collide next Friday in a 7:00 start. Bay City John Glenn will look to rebound next week when their season doesn’t get any easier. They’ll face that same Frankenmuth team who left the Panthers reeling in their matchup. John Glenn moves to 1-2 overall and 0-2 in the TVC. They’ll welcome in a Frankenmuth team who is 3-0 overall and 2-0 in the conference next Friday night at John Loop Football Field. 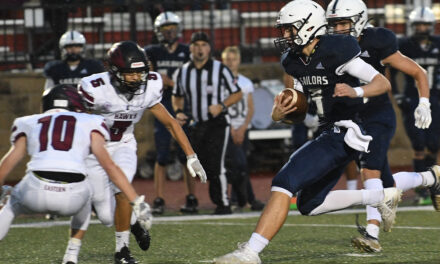