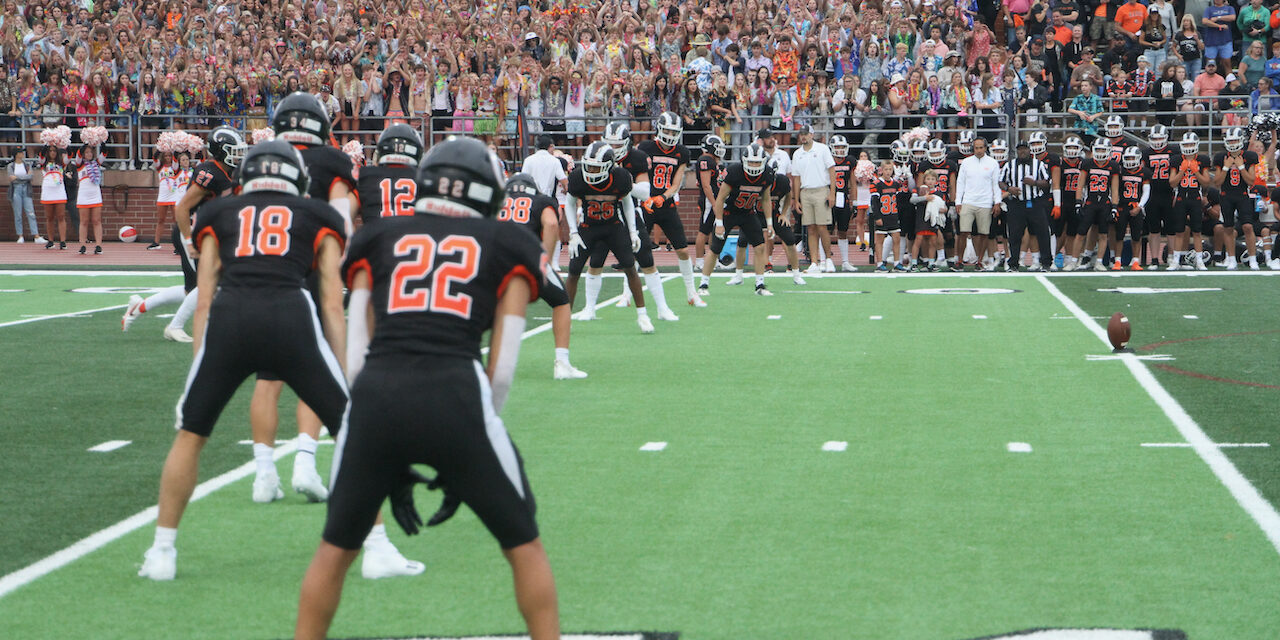 One of the worries facing Rockford this year was how the team was going to navigate the loss of star quarterback Zak Ahern for the 2022 football season. Consider that concern answered emphatically as new quarterback Mac VandenHout sliced and diced the Pioneer defense all night long on his way to an epic debut for the Rams. VandenHout was 24-31 for 324 yards and six touchdowns against a single late interception. He was also the leading rusher for Rockford as he racked up 53 yards on just seven carries. All that equated to a dominating 48-7 win for Rockford in a game they led from start to finish at Rockford on Thursday, August 25.

“Mac is a worker,” said Rockford head coach Brent Cummings. “Every practice he preps very, very hard and takes in all the coaching he receives and uses it to get better. He has an every week mentality that he is just going to improve at every turn. He is also a very sharp guy and soaks up everything and that allows us to maintain the exact same offensive philosophy we used the previous two seasons with Zak (Ahern).”

After stopping EGR on their opening drive, Rockford took only four plays to score the game’s first points. The drive culminated with a 27-yard scoring pass to Brody Thompson over the middle that he took in stride for the touchdown. Jackson Burkholder added the first of his six successful extra points and it was a 7-0 Rockford lead at the 9:51 mark of the opening quarter. After forcing another quick Pioneer punt, the Rams added to their lead just four plays later. This time it was VandenHout rolling hard to his left before firing a high arching spiral to Alex McLean that he leaped to snare just over the hands of a pair of EGR defenders in the left front side of the end zone. That made it a 13-0 Rockford lead with 7:17 left in the opening stanza.

Mclean took over the all-time career receptions record for Rockford in just the first contest of his senior season. McLean broke the record of former Ram stalwart Callen Sherd midway through the third quarter.

The Pioneers refused to roll over at that point as they used a 58-yard fade route deep down the left sideline to set themselves up for their only score of the game and send a glimmer of hope to the East Grand Rapids faithful. The drive ended with a two-yard plunge from quarterback Preston Bergstrom that made the score 13-7 with 5:06 still to play in a fast-paced opening quarter. Once again the Rams marched the length of the field to reestablish their two-score lead. This scoring drive was much more methodical as the Rams used 14 plays to march 71 yards and make it a 20-7 game. The TD pass was a pinpoint fade in the far left corner of the end zone to Thompson. Thompson deftly dragged his feet inside the line to finish the beautifully executed play. That marker came with only 17 seconds left to play in a frenetic first period.

EGR did manage to drive to the Rockford 44 before being stuffed on a fourth down play to set the Rams up for their next score. This time it was a delay route over the right side to junior running back Ryan Ahern. After again stopping the Pioneers on a fourth down attempt, the Rams finished off another drive with a five-yard delay route over the right side by junior running back Ryan Ahern with 6:02 left in the opening half.

After another fourth down stop the Rams completed a perfect first half offensively with their fifth touchdown on five possessions. Rockford managed to overcome a holding penalty to continue their relentless assault on the EGR defense. It was Ahern again who did the honors as he reeled in a screen pass over the right side and broke multiple tackles on his way to the 22-yard score with only 1:26 left in the opening 24 minutes. It was a brilliant call form offensive coordinator Jason VanderLaan that made it a 34-7 game and concluded the scoring in the first half.

Rockford received the second half kickoff and proceeded to make it six for six with drives that ended in TDs. This time it was a pass that was floated over the left side to Joey Pitsch for eight yards to make it 41-7. VandenHout threw it high and allowed the 6’5″ Pitsch to go up and reel the pass in for the score. That was all of the scoring for the Rams first unit but the scoring did not end there. Drake Irwin and Kaleb Bale combined for a 26-yard touchdown pass from Irwin that Bale snagged over the middle and used extraordinary effort to reach the end zone. That made the score 48-7 Rockford and set the running clock in motion for the balance of the contest.

“Our philosophy is to practice fast and play fast,” said Cummings. “Today we came out firing on all cylinders and were able to maintain that edge all game long. We have two groups of players that really compete against each other and make both the offense and defense better. I am also really pleased we were able to get an incredible number of players into the game today and that is always gratifying to see their hard work rewarded.”

In addition to VandenHout’s passing numbers, Irwin was 2-4 for 30 yards and a TD. The Rams totaled 461 yards for the contest with 354 coming on passes and 107 on the ground. The Ram receiving corps had incredible stats of their own. McLean led the way with 11 catches for 160 yards and a TD. Thompson had 4 catches for 61 yards and a pair of touchdowns while Pitsch added 3 for 33 yards and a TD of his own. Ahern’s two catches accounted for 28 yards and both ended in touchdowns. And Bale had the one lone catch for 26 yards and the final TD of the night for the Rams.

Rick Beison led the Ram defense with a total of nine tackles and Ahern added 7 of his own. Isaac Poot and Jacob Tomasko contributed six tackles apiece and Gabe Stouffer, Tyler Hoek and Colby Weston all pitched in with five stops.

Rockford will return home next week Thursday, September 1 at 7:00 when they host highly touted Muskegon Mona Shores. The Sailors are ranked as high as number two in several preseason polls in Division 2 and always field an excellent squad. This game will be the final nonconference tilt for the Rams as they will begin the juggernaut that is the OK Red on week three. 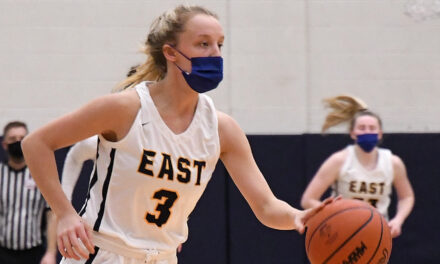 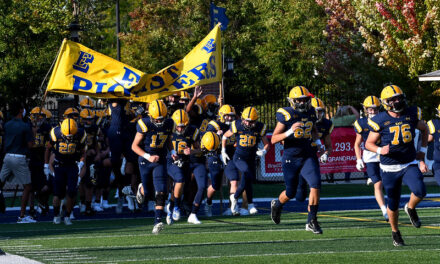 Schedules Posted, 2021 Football Season is on the Horizon!