The CSAA suffered some membership attrition this offseason. They still have 11 strong members over two divisions. Those teams’ games are previewed below.

New Grant Head Coach returns to his old stomping grounds in Comstock Park as the Tigers take on the Panthers to open the season!

Comstock Park went 9-1 last season, but they did lose nine starters. That is not to take away from the fact that there are still several returners back with the Panthers this season. The winning culture has been set for the program and they would like to continue the success.

The Tigers on the other hand, are starting fresh. They bring in first year head coach, Jason Hill who just last season was an assistant on the Comstock Park staff. Grant will have a new face running their offense with Brady Jacobs graduating. Jacobs last season accounted for 63% of the Tigers scoring, but look for Zak Barnhart and Chase Geers to step up in week one.

These two opened the season last year and it ended with a Comstock Park win, 55-6. Expect for a closer game this season, but with Grant still trying to find their identity early in the season, it could slow them down.

Reed City opens at home as Orchard View returns to the field after not playing the 2021 season.

Orchard View returns to the playing field after having to cancel last season just two weeks before kickoff. Although the JV season continued as scheduled, the lost varsity season leaves many questions on how the Cardinals will look in week one. Will they be energized and excited to play again? Or will they be rusty after taking a year off? Only time will tell. They open the season with the reigning CSAA Gold Champs.

Reed City opens their campaign to hold the crown of the Gold with Orchard View. With Reed City ending last season 9-2, you would expect the team to be young this season. That is not the case. The Coyotes only graduated nine players, four of them being starters and All-Conference players. Xavier Allen will return under center and have his three leading rushers and leading receiver from last season back with him. Expect for Allen and his targets to continue where they left off last season.

As there are many questions on what Orchard View brings to the table after a season away, the Coyotes will have to be focused on the Cardinals and not look ahead to important conference matchup against Tri-County in week two.

In a rematch of last season’s opener, Coopersville will travel to Big Rapids to take on the Cardinals.

Coopersville started last season on a five-game winning streak but dropped four of their final five last season. Although, the Broncos hit a skid at the end of the season they are expected to have a big season, returning many starters on both sides of the ball.

Big Rapids is looking to forget the end of last season, where they dropped their final three games including two which came down to the final drives. The Cardinals will have the opportunity to do so when they host Coopersville to open the season. Big Rapids’ third-year play caller, Wil Strickler, will return off a season where he was second in the CSAA Gold in scoring. The main question for Strickler: who he going to get the ball to? Big Rapids graduated running back Justin Gorczewicz and All-State receiver Jamal Strickland. The defense for the Cardinals will be one of the most experienced in the CSAA Gold, returning multiple starters from last season.

With both teams ending last season on a low note, they will be looking to bounce back and start the season on a high note. This same game last year ended in a 42-30 win for Coopersville. Expect another high scoring game that could be decided by whichever team has the ball at the end.

Newaygo and Kent City open the season against each other for the fourth time in five seasons in the interdivisional matchup.

Newaygo is coming off a disappointing season to many in the Newaygo football program. However, they get a fresh start with new head coach, Scott Force. Coach Force brings back plenty of talent including All-Conference receiver Remy Wells, who had the second most receiving TD in the Gold a season ago. Newaygo also brings back quarterback Grant Harkness, who connected to Wells nine of his thirteen passing touchdowns last season. Newaygo’s passing offense should give them a boost this season with an experienced WR core in Wells, Josiah Long, Dyllan Bazzett, and Ethan Reyburn.

Kent City will also have a new face of the program coaching his first game against Newaygo. Zach Gropp was the Defensive Coordinator for the Eagles for the past four seasons. The Kent City offense and defensive attack will remain the same as Gropp will still call the defense and the offensive coordinator returns. The Eagles will have veteran quarterback, Kyler Larson returning. Along with Larson is teams leading scorer from a year ago, Mason Westbrook. The Eagle run game a year ago was hard for teams in the Silver to stop, and with many returners it should only improve in week one.

With both teams having new coaches, it will be interesting to see the energy they come out with in the season opener. This should be a shootout as it has been in recent years. Expect for a dog fight in Newaygo.

The Central Montcalm v. Morley-Stanwood cross-division rivalry has been a staple in recent memory for the CSAA to open the season.

The Hornets young players will have to fill the shoes of five All-Conference players from a year ago. There have been a number of players stepping up for Central Montcalm, but look for Coach Cripe’s squad to lean on returning running back, Isaac Johnson early in the season as the young players get their footing. Johnson led scoring for the Hornets last season with seven rushing touchdowns.

The same inexperience that Central Montcalm has is also in the Morley-Stanwood program. There was question going into camp who was going to be under center for Mohawks, but it seems like Mikey Mercer has run away with the job. The Mohawks return three offense lineman and want to utilize that experience as much as possible.

Both teams having to fill some holes with youth will make the coaches fall on what they trust the most. For Central Montcalm, that will be Isaac Johnson running the ball. For Morley-Stanwood, that is their offense line. Expect for this game to be a physical game won and lost in the trenches.

Chippewa Hills will take on Gladwin in the season opener and with hopes to start the season off on the right foot.

Gladwin had a historic season last fall. They went 9-0 and won their first conference title since 2002, but the excitement abruptly ended with a first round loss to Clare. The high-power offense of Gladwin, that outscored opponents 477-67 last season, will return several starters.

The Warriors will open the season with the test of the strong Gladwin squad. Chippewa Hills has been at the bottom of the barrel in the CSAA Gold in recent years. This season, they have experience to give them hope of improvement. Although there is experience on the team, there are only two seniors on this season’s roster! The Warriors lost their All-Conference quarterback, Logan Davis, but Austin Humphrey will return in the backfield for the Warriors and will take most the carries early in week one.

Chippewa Hills is going to have a difficult task slowing down the high-powered offense in Gladwin. This should be a high scoring game in Remus.

A CSAA cross-division rivalry that has opened the season for both teams every year since 2014 is back.

Lakeview finished last season at the bottom of the Silver. The season, they are looking to clean up the little mistakes they made last season and improve their win total. They’ll start that pursuit with Tri-County. The Wildcats return multiple offense lineman and running back David Evans. The Wildcats will stick to their veer back offense they have done for a decade and capitalize on other teams making mistakes.

Tri-County in recent years has become one of the teams to beat in the Gold. That will be the same story this year. The Vikings are going to have weapons all over the field on offense. David Sheehan will be set behind center, but he will have Trent Behrenwald lined up next to him, while out wide will be Stuart Gould, Ian Boden, and Blake Nelson. The options for the Vikings are a plenty. You can expect for them to utilize all of them in a number of ways.

Tri-County has an important conference game week two against Reed City, but they have to be focused on week one against Lakeview. If the Vikings aren’t locked in, they could very easily be upset when the Wildcats capitalize on mistakes.

The lone CSAA Silver playoff team from last season starts their run at another playoff berth against Shelby.

The Shelby Tigers are looking for their first win in three seasons and third win since 2015. The Tigers coach Phil Fortier is back for his second season and is trying to get Shelby their first win. It will be a difficult task but there is hope in this team.

White Cloud was the lone Silver playoff team last season despite finishing fourth in the conference. The Indians finished on a four-game skid, and are working to start of the 2022 campaign right. These two teams matched up in last seasons opener ending in a 33-6 win for White Cloud. The Indians leading scorer from a year ago, Mason Ruether returns for his senior season. Expect for him to pick up where he left off against Shelby.

The Indians appear to be the better team going into this matchup but with Shelby hungry to get their first win in three seasons this could allow for a closer game than expected. 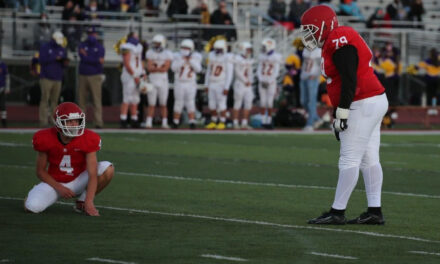