Last Friday night, West Catholic began their playoff march in a familiar place, Houseman Field. After advancing past Comstock Park, they will now square off with their most frequent foe, Grand Rapids Catholic Central.

“It’s a historic rivalry,” West Catholic Head Coach Justin Michalowski shared in an interview this week. “It’s a great opportunity for our community and for our kids to play in such a big game. As a West Catholic alum, it’s special to play in this type of game.”

This is the 52nd all-time meeting between the Falcons and the Cougars, dating back to West Catholic’s inaugural City League contest in 1965. That evening, the Falcons rushed for 279 yards behind Denny Holzgen and Tom Steele, stunning the Cougars and holding them to just 106 yards and zero offensive points in a 27-6 thrashing. On Friday evening, West Catholic is hoping to recapture that magic and pull of another stunner at the hands of Grand Rapids Catholic Central.

Grand Rapids Catholic Central enters this year’s game as winners of 33 consecutive contests, and two straight State Championships. “They are an extremely well coached bunch,” Michalowski stated. “Nolan Zeigler is a special player, and (John) Passinault has really stepped up. They are extremely sound, and they don’t make mistakes. When you don’t make mistakes, you don’t lose.”

Zeigler, a Notre Dame commit, has anchored this receiving core with 39 receptions for 873 yards and 18 touchdowns. These are all top-10 single-season marks in program history, and just two touchdowns would tie the program mark. As a result of his play on both sides of the field, the Media All-Conference Awards just named him the OK Gold Player of the Year. He is not alone, however, joined by Ronin Russell-Dixon (558 yards) and Devin Fridley-Bell (8 touchdowns) to form one of the area’s best trio of receivers. This has allowed John Passinault to step into the starting role at quarterback, replacing Joey Silveri, throwing for 1,445 yards and 25 touchdowns.

Speaking to Coach Michalowski’s point of limited mistakes, the Cougars have just seven turnovers on the year, 6 interceptions and 1 lost fumble. On the contrary, they have been able to force turnovers with 16 interceptions and 9 fumble recoveries, resulting in a +18 turnover margin.

“I’ve got to give a lot of credit to the way our defense has played all year.” Michalowski praised. “We went up against a high-powered offense last week, and we held them to 44 yards. There is a confidence in the way that they carry themselves. But this week is another big challenge for us.”

Defensively, Jack Cook (77 tackles), Jack Klafeta (68 tackles) and Ziegler (67 tackles) fly around the field and make plays for the Cougars. They will be tasked on Friday evening with stopping one of the area’s top running backs in West Catholic’s Tim Kloska.

Kloska has been a standout for the Falcons offensively this year. In ten games, the junior has racked up over 2,100 yards and scored 28 touchdowns on the ground. He has spearheaded an offensive attack that currently averages 39.4 points per contest. “Tim is the “it” factor on this football team. He brings some swagger and confidence to a team that relishes on hard work,” Michalowski explained. “Nobody has worked harder than him both on and off the field. He is the silent leader of this football team based on the way he plays.”

If Kloska is the focal point of the Cougars’ defensive attack, it may allow quarterback Noah Arsulowicz an opportunity to use his dual-threat abilities. Arsulowicz has passed for 950 yards this fall, while rushing for 475. With 18 total touchdowns, he needs to have a great game. The success of this offensive attack will ultimately rely on the line play, which Michalowski called the “staple” of this offense.

With a district championship on the line against their rival, Michalowski reminds his team of one of the mottos they have followed all season. “Just Believe.” 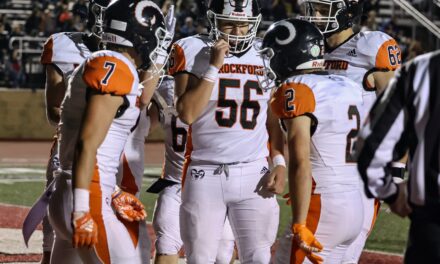