The Frankenmuth Eagles opened District Playoff action with a decisive 42-6 win over the Carrollton Cavaliers on Friday night.

The Eagles scored first in the opening quarter after Travis Brenner intercepted a Carrollton pass, and two plays later Cole Jankowski scored on a 3-yard run. Seth Malmo added the first of his six PAT’s for the game, creating a 7-0 Eagle lead.

On the ensuing possession, Carrollton’s DJ Voltz scored on the first play on a 65-yard dash to narrow the Eagle lead to 21-6.

The Eagle defense stopped a Carrollton drive when Jankowski intercepted a pass and on the next play, Hunter Leddy went 21 yards for the final score of the game. The Eagle offense totaled 352 yards, all in the rushing department. Cole Lindow led the rushers with 106 yards, followed by Barger’s 86 yards and Jankowski with 79 yards. The defense limited the Cavaliers to 136 yards rushing. Ashton Benkert led the Eagles with 14 tackles. Dalton DeBeau had 13 tackles, Jake Andrews 11 and Dayne Reif with 10.

The Eagles will play for the District Championship next Friday against Tri-Valley 8 foe Swan Valley who defeated Garber by a 6-3 score. 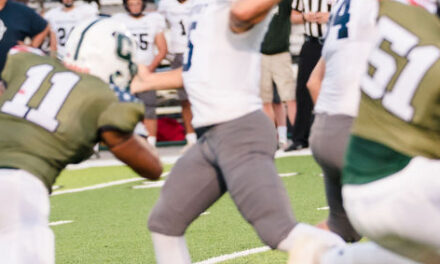