The Holton Red Devils recorded their fourth win of the 2021 campaign, their highest total since their State Semifinal appearance in 2018. They achieved this plateau by defeating Hesperia on Friday night, 56-12.

Holton raced out to a 32-0 halftime lead, and they never looked back in this game. Austin Fowler had a phenomenal game, completing 10/19 passes for 360 yards and 6 touchdowns. Fowler added 14 rushing yards, the second highest total on the team. Cameron Edgerton claims the honors for top ball carrier with 19 yards and a touchdown on two carries.

On defense, Dylan Cartwright led the way with 10 tackles. Rice Robins added 8, while Austin Fowler had 6. Holton forced three turnovers, as Aaron Waterman and Kaleb Nichols each recovered a fumble, while Cameron Edgerton secured an interception.

This was the final game in the CSAA Silver for both schools, as they will be playing in the new-look West Michigan Conference next fall. Next week, Holton will be looking for an opponent, as their originally scheduled foe, Wyoming Lee, is currently playing an 8-man schedule. Hesperia, 0-6, will look for their first win against a tough Manistee club. 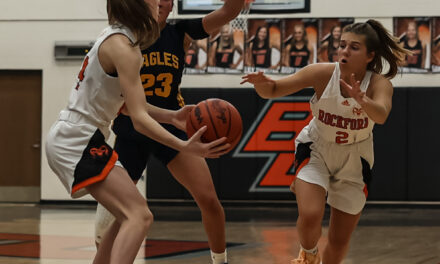