After a tough loss last week, Central Montcalm returned to the win column on Friday night. They had little trouble with Chippewa Hills, capturing a 27-7 victory.

Two minutes into the game, Central Montcalm took the lead. Kaleb Crooks tossed it up to Mitch Herald, who raced 60 yards to the end zone. Brandon Casante-Rivas pushed the lead to 7-0 with his extra point.

In the second quarter, there was once again another touchdown. This time, it was Isaac Johnson. He used his legs on a 9-yard touchdown run to give Central Montcalm a fourteen-point lead at the break.

All scoring after the break came in the third quarter. Mitch Herald got things going at the seven-minute mark, as his second touchdown came on a 2-yard plunge. Logan Davis would respond for Chippewa Hills with his third rushing touchdown of the season. As the quarter came to an end, Kaleb Crooks used his legs on a 1-yard touchdown to bring the game to its final tally, 27-7.

Central Montcalm (4-1) has their toughest test next Friday, as they will take on Reed City. Chippewa Hills (0-5) will continue their search of their first victory as they square off against Big Rapids. 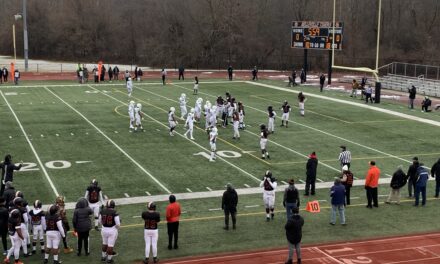