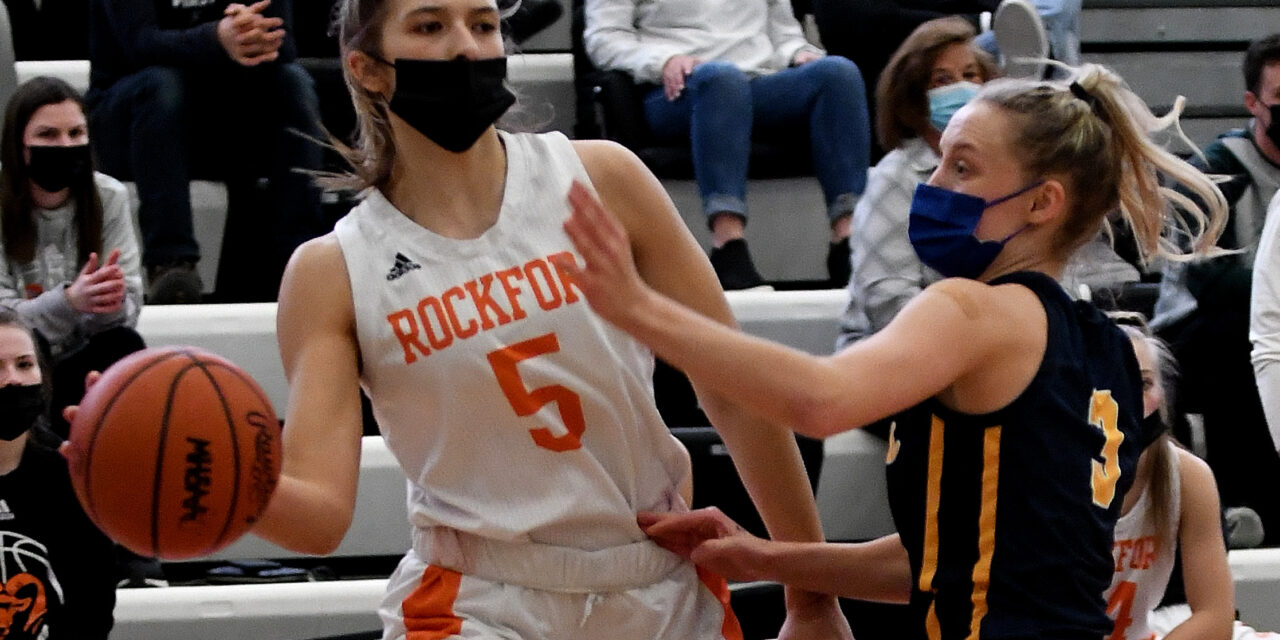 Hudsonville 62 Mona Shores 43: The Eagles advance to the regional finals with a win over the Sailors. Hudsonville race out to a 13-3 lead before ultimately leading 17-9 after the first quarter. Mona Shores brought it within three points at 25-22, but some late offense helped Hudsonville push the halftime lead back to eight points. In the third quarter, Hudsonville won 15-6 to create a margin far too large for the Sailors to overcome. Jaci Tubergen and Maddie Petroelje each scored 14 points to lead Hudsonville, while Eva Joldersma added 10 points and 7 rebounds. Riley Rosenthal paced Mona Shores with 8 points and 6 rebounds, Brooke LeRoux added 7 points, and Lily Miller chipped in 5.

East Grand Rapids 67 Rockford 56: The Pioneers raced out to a 9-0 lead in this game, and East turned it into a 37-24 halftime edge. EGR led by double digits for most of the second half, but a quick run did trim the lead to five at one point. Jillian and Macy Brown each stepped up to put the game away. Jillian Brown led EGR with 24 points, while Macy Brown added 11. Elle Irwin led Rockford in defeat with 20 points.

Ludington 43 Standish Sterling 36: The Orioles took down the Panthers in the regional semifinals. It was a slow start offensively, as Ludington led 6-4 after the first quarter. The defense of Ludington continued into the second quarter, holding Standish Sterling to six points, as they led 19-10 at halftime. After leading by eleven at the end of the third, the Panthers won the fourth quarter to trim the final margin. Hailey Stowe paced the Orioles with 18 points, while RyAnn Rohrer and Abi Bandstra each added 7. Macey Fegan led Standish Sterling with 22 points and 14 rebounds, while Elle Adrian added 7 points and 12 boards.

Frankenmuth 47 Lake Fenton 43: The Eagles trailed by 8 at halftime, but they rallied for a regional semifinal victory. An 8-0 lead at the beginning of the third quarter evened the score, but Lake Fenton still took a 29-28 lead into the final frame. Zoey Persails scored 20 points to lead Frankenmuth, while Emma Kerkau added 10.

Portland 54 Freeland 32: The Raiders got out to a 14-6 lead after the first quarter of this semifinal. They continued to build their lead the next two quarters, pushing it to 39-21. By the end, they won this ballgame by 22 points. Ava Guilford led Portland with 13 points, Ashley Bower added 12 points, and Shay Dziewiatkowski finished with 8.

West Catholic 69 Grand Rapids Christian 52: The Falcons led by 4 points after the first quarter, but they extend their lead to 9 at halftime. This nine point edge would carry over into the fourth frame, where West Catholic closed it out with a 21-13 edge. Abbey Kimball led WC with 27 points.

Newaygo 47 Montague 37: The Lions punched their ticket to the regional finals with a ten-point win over previously unbeaten Montague. Newaygo led 28-18 at halftime, and although Montague made some runs in the second half, they were able to win by the same margin. Jaxi Long led the Lions with 14 points, 7 steals, 6 rebounds and 4 assists. Jaylee Long added 11 points, while Emmerson Goodin had 6 points and 6 rebounds. Newaygo Head Coach Nathan Thomasma said he thought that “the way we finished the second and third quarters were huge. A great game by our team tonight.  Montague is a tough team and we knew it would be a great game and it was.  I was really proud of our defensive effort tonight.  Thought we had contributions from everyone, which you need to beat a great team. I couldn’t be more proud of this team.” Braquelle Osborne led Montague with 13 points, and Andie Zamajcin added 8.

Edwardsburg 67 Buchanan 47: The Eddies took down unbeaten Buchanan in the regional semifinals. Leading by ten at halftime, they finished strong with a second half performance outscoring Buchanan by ten. Katie Schaible led Edwardsburg with 17 points, while Macey Laubach added 14 points. LaBria Austin paced Buchanan with 17 points.

Wayland 54 Plainwell 41: The Wildcats advance to the regional finals with a strong performance against a Plainwell team that only had one defeat. It was 11-9 Wayland after the first quarter. In the second frame, Wayland outscored the Trojans to extend their halftime lead to 10 points. Plainwell battled hard and trimmed the margin to 4 points entering the final frame, but Wayland closed out with a 19-10 fourth quarter.

Hart 55 Beaverton 30: The Pirates can out firing on all cylinders. They hit five three-pointers to create a 20-7 advantage after the first quarter. They kept pushing, extending their halftime lead to 30-10. Each team scored thirteen third quarter points, and Hart then coasted to the victory in the final frame.

Maple City Glen Lake 69 McBain 43: The Lakers started ahead 7-0, but McBain battled back to trail 18-13 after the first quarter. A strong second quarter allowed MCGL to extend its lead at halftime to 15 points, 37-22. The pressure of the Lakers’ defense was too much throughout, as they outscored McBain by 11 in the second half, on their way to a huge victory.

Covenant Christian 42 Merrill 17: The Chargers cruised to a victory against the Vandals. They will now look for their first regional championship since 2016.

Kent City 53 Western Michigan Christian 37: Two potent offenses started this game out with a defensive battle early. Kent City led after the first quarter, but the tally was only 9-6. The defensive muscles continued to flex in the second quarter, as the Eagles led 17-16 at the break. In the first half, Kent City only shot 6/25 from the field. Things picked up offensively in the third quarter, as Kent City doubled their score, taking a 34-26 lead to the final frame. WMC pulled within six with an opening basket, but Kent City went on a 9-0 run to recreate separation. Jenna Harrison led Kent City with 21 points, Kenzie Bowers added 19 points and 8 assists, and Lexie Bowers chipped in 8 points and 5 assists.

Schoolcraft 53 Kalamazoo Hackett 51: The Eagles experienced the highs of playoff basketball, as they stunned undefeated Hackett. Schoolcraft won on a game-winner by Mackenzie Miller in the closing seconds of the contest. (VIDEO LINK  by Andrew Secor)

Gobles 44 Hartford 40: The Tigers punched their ticket to the regional finals with a close win over Hartford. Amanda Barber led Gobles with 17 points, 5 assists and 5 steals. Deven Thompson added 8 points and 4 rebounds, while Kennadi Killeen chipped in 6 points, 9 rebounds, and 2 assists.

Colon 52 St. Joseph Michigan Lutheran 49: It was a tough battle between the Magi and the Titans, but in the end, Colon is advancing to the regional finals with a narrow three-point victory.

Martin 58 Walkerville 43: Martin won all four quarters in this game, securing their spot in the regional finals. They got off to a slow start, but they got things rolling in the second half. In a ten-minute stretch of this game, they scored 28 points to create real separation. Gracie Shettler led Martin with 23 points, while Bri Warner added 12. Cirsten Coburn hit three triples to finish with 9 points, while Natalie Yowler posted 8 points.