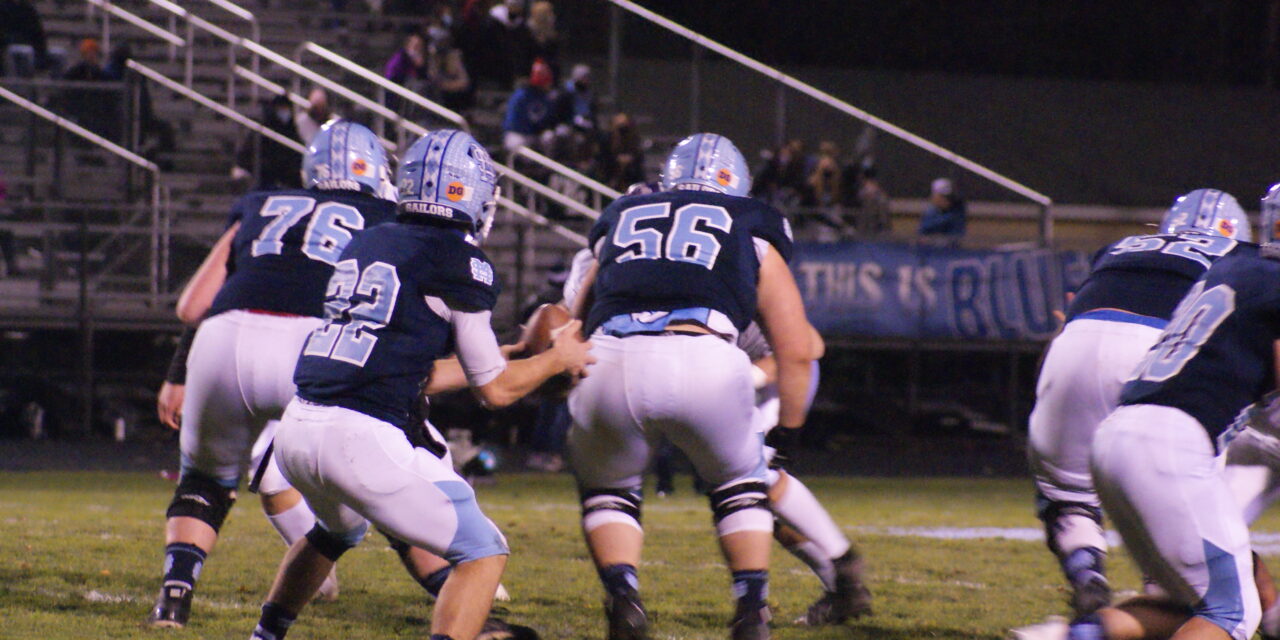 Last fall, Mona Shores battled and earned the school’s first championship on the gridiron. This weekend, they repeated as champions, capping off a wild season with a second consecutive victory in the finals. They held off a surging Warren De La Salle team to win this game 25-19.

On their opening drive, the Sailors wasted no time in getting on the scoreboard. Brady Rose led a six-play, seventy-two yard march to the end zone, and he capped it off with a twelve yard touchdown run. The unsuccessful conversion left the score at 6-0 in favor of Mona Shores.

In the second quarter, Mona Shores extended their lead to thirteen points when Elijah Johnson burst through the Pilots’ defense for a nine-yard score. They would take this 13-0 lead to halftime, as Warren De La Salle tossed an interception in the closing minutes of the first half.

The Pilots made some schematic changes in the locker room, as Coach Dan Rohn called on his running quarterback JC Ford to lead the charge offensively. He led an opening drive that resulted in a score, as he rushed for a four-yard touchdown. This brought the score to 13-7 in favor of Mona Shores, a margin that would carry over into the fourth quarter.

At the end of the third quarter, with momentum seeming to flip to WDLS, the Sailors forced a crucial turnover on downs, stopping the Pilots at the thirty-one yard line. Mona Shores responded with a sixty-nine yard touchdown drive, finished off with a Keondre Pierce touchdown run.

JC Ford shot through the Sailors’ defense for a fifty-two yard touchdown run, pulling De La Salle back within six points, 19-13, with eight minutes to go.

The Sailors punted the football away on the ensuing possession, but after another defensive stop forced De La Salle to turn the football over on downs, Mona Shores regained possession. They took up three minutes and fifteen seconds, before Brady Rose powered into the end zone for his second touchdown of the game.

Trailing by twelve, Warren De La Salle turned to their passing quarterback, Brady Drogosh. He led a seventy-yard march, capping off the drive with an impressive fourth down conversion. In a fourth-and-goal situation, the sophomore used his legs and ran for five yards to cut the lead to six points.

The game came down to an onside kick, where Brady Rose came up with the football to secure the second straight State Championship for Matt Koziak’s bunch.

Brady Rose claims the final Redi Rental Sailor of the Game honors for this phenomenal 2020 season. He finished his high school career by leading the team to the State Championship. He finished only 2/8 passing, but he turned 22 carries into 154 yards and two touchdowns. Defensively, he added seven tackles and a blocked PAT attempt.

Elijah Johnson was the Sailors’ second leading rusher with 81 yards on 14 carries. Elijah Farnum  led the Sailors with seven receiving yards, and he added twenty-four yards on the ground. Defensively, Kyree Hamel was the star for Mona Shores. Hamel led the team in tackles with eleven (1 TFL) and he had the interception in the first half of the game.

Warren De La Salle was led in passing by Brady Drogosh (59 yards). JC Ford led the rushing attack (15 carries for 111 yards and two touchdowns). Alton McCullum was the leading receiver with 32 yards. Defensively, Will Beesley (20 tackles) and Jayden Conklin (14 tackles) were all over the field.

Red Hawks Rally from Thirteen Down to Defeat Swan Valley