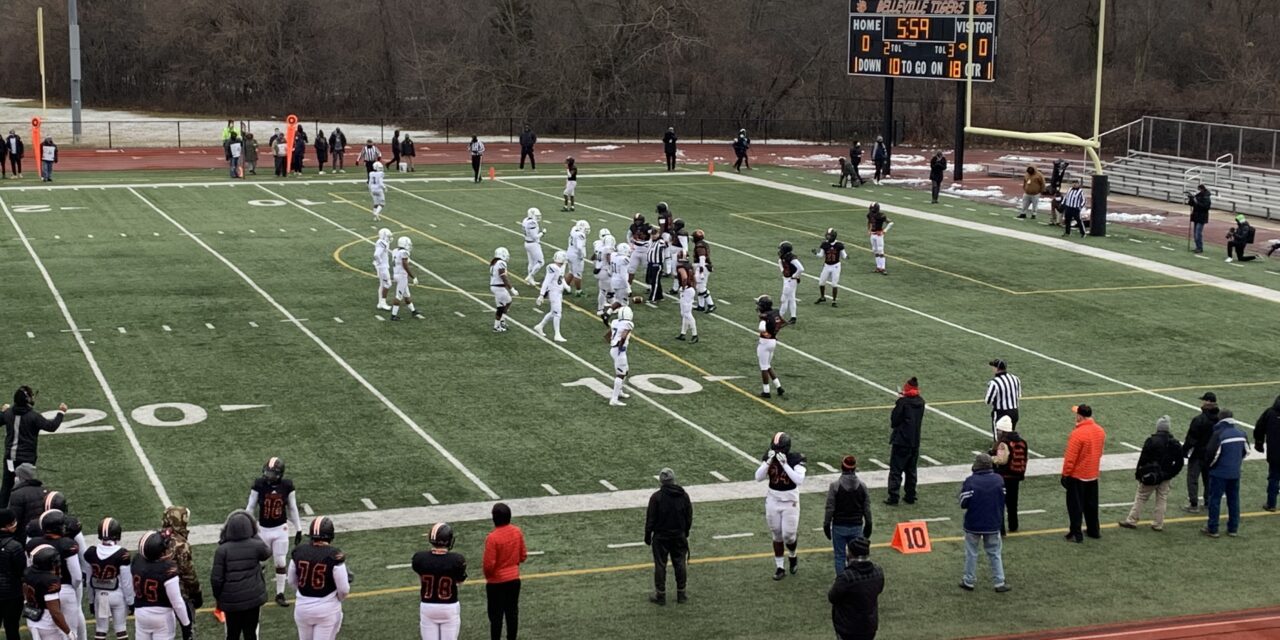 It was a battle between some of the top teams in the state of Michigan, with a number of kids committed to play college at the next level and it did not disappoint.

Belleville deferred the coin toss, putting the ball in the hands of the West Bloomfield Lakers to get things started.

After a couple of three and outs by both teams, we got our first impact play. Belleville three-star junior cornerback Deshaun Lee intercepted West Bloomfield quarterback Alex Short’s pass at the Tigers 30 yard line.

The Tigers could not capitalize after the turnover and then a bad punt gave the Lakers great position, starting at the Tigers 35 yard line.

After a couple of good runs from West Bloomfield running back and Michigan commit Donovan Edwards, the Lakers were faced with a fourth and goal from the two yard line. Belleville’s defense stood tall and stopped Edwards from getting into the end zone.

Midway through the second quarter, after both teams traded a pair of turnovers, Donovan Edwards broke free for a 54-yard touchdown run to give West Bloomfield a 7-0 lead, which they would take into halftime.

But in the second half, Belleville finally woke up. The Tigers went right down the field to open up the half and it was capped off by a 12-yard touchdown reception by Cameron Jones. The game was tied at 7.

After a West Bloomfield punt, Belleville only needed three plays to take the lead. Cameron Jones got that handoff and took it sixty-five yards to the house. The extra-point was blocked so the Tigers held a 13-7 lead with 2:02 left in the third quarter.

West Bloomfield would take back the lead with a trick play as quarterback Alex Short handed it off to Semaj Morgan who then threw the ball back to Short for the 35 yard touchdown. The Lakers led 14-13 with 9:26 to play in the game.

Belleville would respond with 3:35 left in the game as quarterback Christian Dhue-Reid found Jeremiah Caldwell over the middle for the 29 yard touchdown. The Tigers went for two and got it. The game was tied at 21.

With 11 seconds left in the game, Belleville lined up for a 36 yard field goal that would give them the win, but the kick was blocked by the Lakers, forcing overtime.

The Tigers got the ball to start overtime and scored with another Cameron Jones once again to make it 28-21.

The Lakers would respond with Donovan Edwards once again as he scored from six yards out to force another overtime.

At the start of the second overtime, the Lakers only needed one play. Short hit wide receiver Maxwell Hairston for the touchdown to make it 35-28 Lakers.

Belleville would waste no time responding as Dhue-Reid found Darrell Johnson for the 10 yard touchdown. Belleville head coach Jermain Crowell opted to go for two to try to win the game, but the pass was incomplete.

West Bloomfield finally gets by Belleville in the playoffs after losing to them the previous two times they faced off. The Lakers will play Davison in the Division 1 State Championship game against Davison, who took down Rockford 27-3 in the other semifinal.