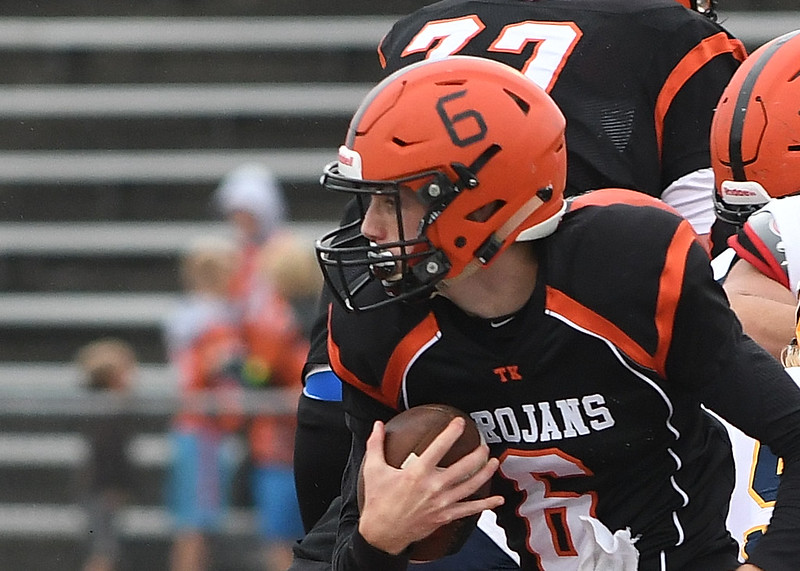 The Middleville Trojans took on the Forest Hills Eastern Hawks on Friday night in a game that was pivotal for their pursuit of a home game in the postseason. They kept that dream alive with a 17-8 win over the Hawks.

After a scoreless first quarter, Middleville found the end zone in the second stanza. Mitchell Middleton rushed twenty-six yards through the Hawks defense for a touchdown. He also booted the extra point to make it a 7-0 game. On the final play of the half, Middleville again benefitted from the leg of Middleton. His forty-two yard field goal gave the Trojans a 10-0 halftime lead.

In the third quarter, the scoring was limited once again. Reece Garbrecht was able to score on a one-yard quarterback keeper for the Trojans, extending their lead to seventeen points.

With 2:41 left to play, Forest Hills Eastern was finally able to end the shutout. John Morgan and Jacob Armbrester paired up for a thirty-one yard touchdown strike that brought the Hawks within nine, but they would never draw closer.

Offense was limited in this game, as the Trojans outgained FHE 240-194. The Hawks won the passing battle 122-1, but Middleville dominated on the ground (230-72). The Trojans’ ability to force four turnovers defensively was also a key in their victory. Alex Bonnema and Jonah Summerhays recorded two of those by hauling in an interception each.

Next week, both teams will be in the playoffs. Who they play, and where those games will be played, will be announced by the MHSAA Sunday. As soon as we hear the news, we will have it available on Michigan Sports Radio.