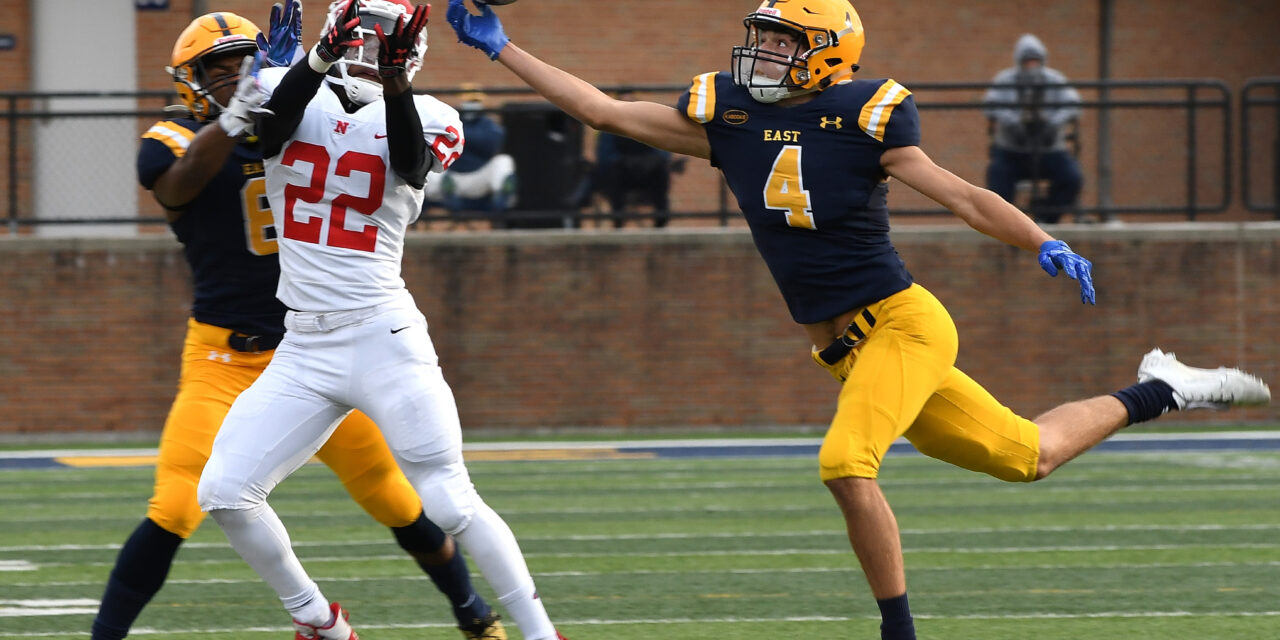 East Grand Rapids defender #4 Jackson Mitchell make a great play on the pass and reeled in one of 3 interceptions.

The East Grand Rapids (EGR) Pioneers hosted the Northview Wildcats in game #3 of the shortened season. Both clubs had a win and a loss to the same opponents. Losing to the Lowell Red Arrows but domination the Greenville Yellow Jackets. The game would prove separation in the OK White conference standings.

The Cats would start with the ball but on the 2nd play of the game, EGR DB/RB Nate Milanowski would score on a 20 yard Pick-6. Before the quarter would end the Pioneers would add to their tally with a 15 yard Pitch and Catch from Patrick Burns to Aiden Stadel. The failed PAT would have the Pioneers leading 13-0.

Northview would use defense to score their first TD of the night in the 2nd quarter. Da’Torian Roberts would return a fumble 57 yards for a score. East would answer with a 16 yard TD from Burns to Grady Gooch making the score at the break 20-7.

The second half scoring would begin with 46 yard TD catch from  Carter Pell to  Jalen Charity Unfortunately for the Cats, that would be the last time they would cross the goal line. EGR would add 32 consecutive points and finish the game with a running clock. Nick Collins would center stripe a 35 yard FG, Khristopher Williams-Young would score on a 3 yd Run (Nathias Grady Run For Two-Point Conversion). Followed by an Stadel 34 Yd Interception Return for another score.

The final frame saw Patrick Burns and Nathias Grady run it in from 6 and 3 yards respectfully. The Grady score would push the difference to more than 35 points. Que the running clock.

The win moves the Pioneers to 2-1. The will travel to the Forest Hills Eastern field next week to play against the 2-1 displaced Forest Hills Rangers. The loss moves the Cats to 1-2. Next for them is a home game vs GR Christian.