The Hastings Saxons travelled to Edwardsburg to take on the Eddies in a Regional Finals on Friday night. The Eddies scored one extra touchdown, and their two-point conversions helped carry them to a 24-14 victory.

In the first quarter, Hastings snagged an early lead. Isaiah Wilson reeled off a 10-yard touchdown run. A failed conversion attempt left the Saxons ahead by just six points.

Edwardsburg responded early in the second quarter on a 2-yard touchdown carry by Brett Allen. On the ensuing conversion attempt, Allen completed the Octopus with a successful run.

On the next Edwardsburg drive, they scored again. For the second straight time, Allen carried the football into the end zone. This time, he broke free for a 41-yard jaunt to paydirt. Allen recorded his second Octopus, though this time he caught the conversion. As a result, Edwardsburg led 16-6 at halftime.

The third quarter saw Hastings finally respond. The Saxons got a 23-yard touchdown run from Lanny Teunessen. Jet Barnum converted the two-point play with a catch. Heading into the final frame, the Saxons trailed by just two points.

Edwardsburg iced the ballgame halfway through the fourth quarter with a third touchdown run by Brett Allen. His hat trick was completed with a 5-yard carry. Brendan Madison added a conversion run to give the Eddies a 10-point win.

Offense was at a premium, as the Eddies outgained the Saxons 288-162. Brett Allen rushed for 112 yards and three touchdowns on 21 carries for Edwardsburg.

Next week, the Eddies will square off with South Christian for a trip to Ford Field. The Sailors defeated Whitehall 28-21 in their Regional Final. 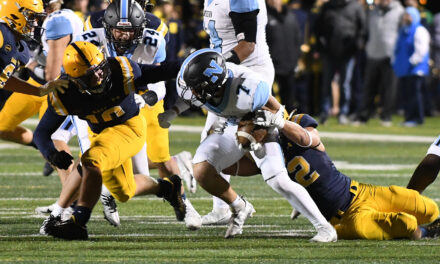