The Frankenmuth Eagles have become a mainstay atop the TVC conference on a yearly basis. It’s a program that has become widely known around the state and is considered a potential state champion on a yearly basis. The Eagles, coming in at 9-0, are hoping another run deep into late November is in the cards. Frankenmuth has rolled over each team that has stood in their way in 2022, with the closest game being a 21-0 win over Freeland. But they would come into this one playing a team that had a little revenge on their minds. The Birch Run Panthers come in at 5-4 on the year and are riding a big regular season finale win. They hope to change the tide in this series , but it just wouldn’t be tonight.

Birch Run would come out and grab some momentum early stopping the Eagles on down on the first drive of the game. The Panthers would put a drive together that would look destined for points until Travis Brenner would come up with an INT deep in Eagles territory. Standout RB Kahleel Brown usually does his scoring on the offensive end, but he would decide to give his team a boost from the defensive side first, stripping an Eagles runner to take one back 22-yards giving the Panthers an early lead. Frankenmuth would set up in solid field possession on the next drive. They would pay it off in a hurry when Griffin Barker found his way in from 7-yards away. A Will Soulliere PAT would put Frankenmuth up, 7-6. Then the Eagles would get busy. Soulliere would grab an INT on the very next possession. One play later, Aidan Hoard would find Brenner on a 28-yard TD pass. The Eagles would have all the momentum after a Barker 1-yard TD dive. All of a sudden after a frantic 1st quarter, Frankenmuth would lead 21-6 heading to the 2nd.

Early in the 2nd, Sam Barger would reach the endzone on a 33-yard TD run. Shortly after, the Eagles would strike again. This time from Hoard to Barger on a 43-yard TD pass and the floodgates were open. Frankenmuth would lead to this point, 36-6. Soulliere would top off the first half for the Eagles with a 27-yard FG. It was all Eagles after one half of play, 39-6.

Frankenmuth wasn’t about to let up to begin the half. Barker would reach the endzone for the third time on the night on a 4-yard TD run. The Eagles would add another turnover late in the 3rd on a Dayne Reif INT that he would take deep into Panther territory. Hunter Bernthal would scamper in from 15-yards out shortly after giving the home team a 53-6 lead. That’s where it would stay as both teams would be held scoreless in the 4th. Frankenmuth dominants yet again, 53-6.

The offense did its thing again for Frankenmuth piling up 304 yards on the night. Griffin Barker was the leading man out of the backfield for the Eagles grabbing 85 yards on the ground. Aidan Hoard got it done through the air going 5 of 10 for 122 yards and 2 TD’s. The Eagle defense was balanced throughout with several guys making plays on the night. On the season, the Frankenmuth defense has stifled opposing offenses giving up just 5.7 points per game.

The Eagles now have a chance at a District title next week. They’ll face another familiar foe in the Swan Valley Vikings. Swan Valley comes in at 7-3 on the season. The two met in week two with Frankenmuth grabbing the win, 41-16. The Vikings, however, come in winners of 7 of their last 8 with the only loss coming to Freeland in a game that came right down to the wire. Swan Valley comes in making their 11th playoff appearance in a row. 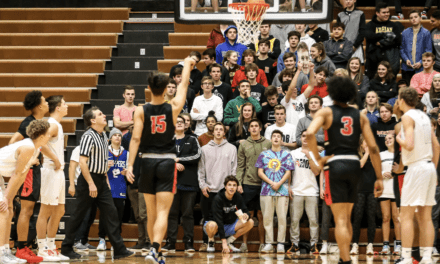