The Freeland Falcons couldn’t have asked for a better week 1 opener against the Clare Pioneers last week. It was a game in which Freeland was able to grab the momentum at home very early on. They had favorable field position for the entire first half, with help from their defense and special teams. Freeland really established the line of scrimmage in this one as well, both offensively and defensively. Gabe Blanchard and Chris Morgan were able to lead that charge. First year starting quarterback Sam Talaga was able to gain confidence throughout the night playing behind a stout offensive line.

The Alma Panthers faced a Shepherd Bluejays squad who used every facet of the game en route to a 28-14 win. The Panthers hung around all night and made things interesting at times. But just when they started to gain the momentum, the Bluejays would get a play right back keeping that momentum. Quarterback Sam Rosales was able to lead the Panthers but it just wasn’t enough.

The Falcons will look to establish the line of scrimmage again against the Panthers. The Panthers, meanwhile, will look to see if they can slow down the pounding run game of the Falcons. These teams will meet this Thursday night when the Panthers travel to Freeland as the teams open up TVC play.

The Frankenmuth Eagles knew they had an opponent in the Goodrich Martians who were experienced and hungry to avenge last year’s loss to the Eagles. This one was tight again through much of the first half as the Eagles took a 10-0 lead into the half. Goodrich looked to gain some momentum as they received the opening kick off. Two plays later the Eagles would take over on a big forced fumble. Sam Barger gave the Eagles a 17-0 lead shortly after. The defense of Frankenmuth, led by Drew Titsworth, controlled this one for much of the night. Goodrich was unable to muster anything on offense as Frankenmuth went on to get a big win on opening night, 27-2.

The Swan Valley Vikings opened their season on a different note in week 1. They were unable to get much momentum against a Croswell-Lexington team with high expectations this season. The Vikings were unable to contain Pioneers first year starting quarterback Gavin Espinoza. Espinoza had himself a day a passing touchdown, rushing touchdown, and an interception that he returned for a touchdown. He was helped by running back Belly Groppi who ran for over 200 yards and two touchdowns. The Pioneers held the Vikings to 88 rushing yards while running for nearly 360 yards themselves.

The Vikings will look to turn the tables in this one as TVC play begins and the Eagles roll into town on for a 7:00 tilt on Thursday night.

The Bay City John Glenn Bobcats came into the new year with a goal to become more physical, and in building trust in their football program. What a start it was for the Bobcats, as they cruised to a 42-8 victory in week 1 over the Clio Mustangs. Both physicality and leadership was on display for much of the night. The Bobcats were led by Carson Dabrowski, but had a lot of contributors on the night. The defense was able to create negative plays all night to put the Mustangs in some binds offensively. The starting defense was able to force a shutoff until Clio would get some points on the board late. Much of the same is the key this week when they face the Birch Run Panthers. As coach Jon Horton puts it, “Our goal is to continue to stay physical. We have to stay within our assignments. They have a running back in Khaleel Brown who can make you pay if you are not sound on the defensive side. Offensively our goal is to win the trenches and stay balanced”.

The Birch Run Panthers were able to get off to an impressive start in week 1 as well. The Panthers jumped on Carrollton taking the game 56-20. The Panthers really look to settle in this season under second year head coach Nick Maksimchuk. The Panthers were unable to have a smooth offseason last year, as Maksimchuk was hired late in the process. The Panthers in 2022 benefitted from having a great offseason, and it looks like it could pay dividends for them. Helping with that is lead back Khaleel Brown. The aforementioned Brown was the top offensive player in the TVC last year running for over 1,200 yards and 16 touchdowns.

The Panthers and Bobcats will square off as both teams look to keep a stranglehold on their early momentum. The Panthers will travel to John Loop Football Field for the Bobcats home opener this Thursday night.

The Gladwin Flying G’s could not have asked for a better start in week 1. Gladwin, who has many starters back that contributed on a 9-1 team in 2021, outscored their opponents 489-99 during the year. They didn’t skip a beat heading into 2022. Gladwin jumped out to a quick 28-0 lead in the first quarter before heading into halftime with a 48-0 lead. It’s a group that has been hungry since the end of the 2021 season. Head coach Marc Jarstfer put it, “We were able to set the tone with our physicality and staying focused against Chippewa Hills. We really pride ourselves on being a physical team that gets after the other team on both sides of the ball. We were able to establish it early on and that lead us to having a lot of success throughout the game”. It’s a team that will look to keep that focus against the Harrison Hornets. “Going into this week we’re really focusing on the fact that it’s our league opener, so of course you really want to get off to a good start there”. Jarstfer knows his team will be tested in this one. “Their quarterback is an electric player. They don’t stop. They’re a team that just keeps going on both sides of the ball. It should be a great matchup. We’re excited”.

The Harrison Hornets are also a team that knows a little bit about success. The Hornets have made the playoffs in seven of the last eight years. They kicked off week 1 with a bang, in a 38-6 route over St. Charles. It’s an intriguing battle in Jack Pine Conference play. Both teams have split the series with seven wins in their last 14 matchups.

We’ll see which team can start off conference play on the right foot, as Gladwin makes the short trip over to Harrison in a Thursday night showdown.

With vast amounts of change this year for the Clare Pioneers, they knew it wasn’t going to be easy. Clare faced a Freeland Falcons team last week that was going through some changes of their own this season. The latter’s transition would be a little smoother in the early going. The Falcons were able to grab the momentum early in this one. They were helped by favorable field position and they took advantage, scoring on their first four drives. They set the tone early in the trenches, controlling the line of scrimmage on both sides of the ball. Clare had some things going offensively but were hurt by several penalty calls. As Clare coach Steven Spranger puts it, “We need to be sure we’re finishing drives, and not shooting ourselves in the foot. We knew we were facing a team that will likely be a playoff team. Our effort was still there though throughout and that’s something that we will look to build off of.”

The Pinconning Spartans would suffer a similar fate in week 1. They faced a very good football team in the Standish Sterling Panthers, falling to the Panthers 60-0. The Pioneers and Spartans will now meet for the third time since Pinconning has joined the JPC. The Spartans continue to stay the course under head man Walter Mulligan.

Both teams look to limit their mistakes in this one as they both look to take the JPC opener as Clare heads to Pinconning this Thursday.

The Croswell-Lexington Pioneers are coming off in which they went 10-2 and outscored their opponents 365-127. They knew they would have a lot to replace offensively, as they were led by Northwood University commit Jake Townsend. Enter, Gavin Espinoza. Espinoza, who played wide receiver last year, had a rushing touchdown, passing touchdown, and an interception return for a touchdown in their opener. He wasn’t the only one to have a calming effect on the Pioneers offense, though. Belly Groppi, the Pioneers lead back, ran for over 200-yards and two touchdowns in this one. The Pioneers ran for nearly 350 yards, while holding Swan Valley to 88 yards on the ground in a 34-7 victory in week 1. Head coach Mike LaGow couldn’t say enough about the defense either, “Our defense was lights out early in this one for us. They kept us in the game early on while we tried to get things going offensively”.

That will be a point of emphasis once again in week 2 for the Pioneers, “We will continue to focus on our ground game this week. But we’re also looking to dial in with our passing game as well. The weather was tough last week, so we’re really hoping to get going through the air more this week”, LaGow mentioned. He knows they will be tested as BWAC play opens up in week 2, “Richmond is a a team who always has some great athletes. They love to run the ball and try to be more physical than you. It’ll be a great test to see where we stand as Richmond is traditionally near the top of the standings”.

The Richmond Blue Devils were able to shut out St. Clair last week in a 14-0, win. It is a program that has made the playoffs in their last 10 seasons. Richmond seemed to have a stranglehold on this matchup, until the last couple of seasons when Croswell-Lexington has had some success. The Blue Devils will look to bounce back this year at home against the Pioneers.

In early August each year, the Ithaca Yellowjackets begin what could be another historic season for their program. It’s a team that has had a winning season every year since 2008. Five of those seasons found Ithaca winning the state championship. They posted of a 123-7 record through much of the past decade. It appears that the Yellowjackets continue to be the hunted in the TVC. Ithaca opened up their season with a 60-39 victory over Homer last week.

In week 2, Ithaca will face a new “up-and-comer”. The Standish Sterling Panthers had a special year for their program in 2021. The Panthers made a final four run, and went 10-3 on the year. One of those wins came against Ithaca in a thrilling 27-20 football game. But the Panthers have laid 2021 to rest. They have even higher expectations this year and started that off right in a 60-0 win over Pinconning last week. They have their sights on a Ford Field trip, and they believe they have the pieces to make that happen.

They’ll have a shot to deliver a statement once again in week 2 against the Yellow Jackets. The “challenger” Standish Sterling takes on traditional TVC power Ithaca, in a key opening conference game in Ithaca on Thursday.

Mt. Pleasant opened up their 2022 campaign in impressive fashion. Helped by an enormous home crow, the Oilers were able to cruise to a 42-7 victory over the Kalamazoo Central Maroon Giants. It was simply impressive all-around football for the Oilers. They were able to control the offensive and defensive line of scrimmage for much of the game, led by Junior offensive lineman Andrew Dennis. Dennis is the 21st ranked player in the state of Michigan in the 2024 class. Running back Max Humphrey had an outstanding day as well, with three touchdowns. Scooter Polk added a rushing touchdown and a kickoff return for a touchdown to open the second half that would give the Oilers firm control. Quarterback Logan Borodychuck was also impressive in his first start at the helm. 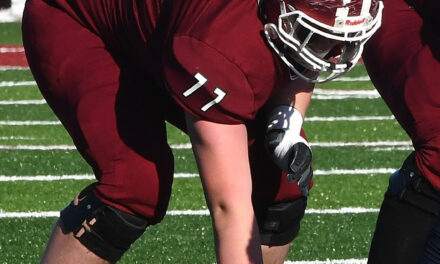