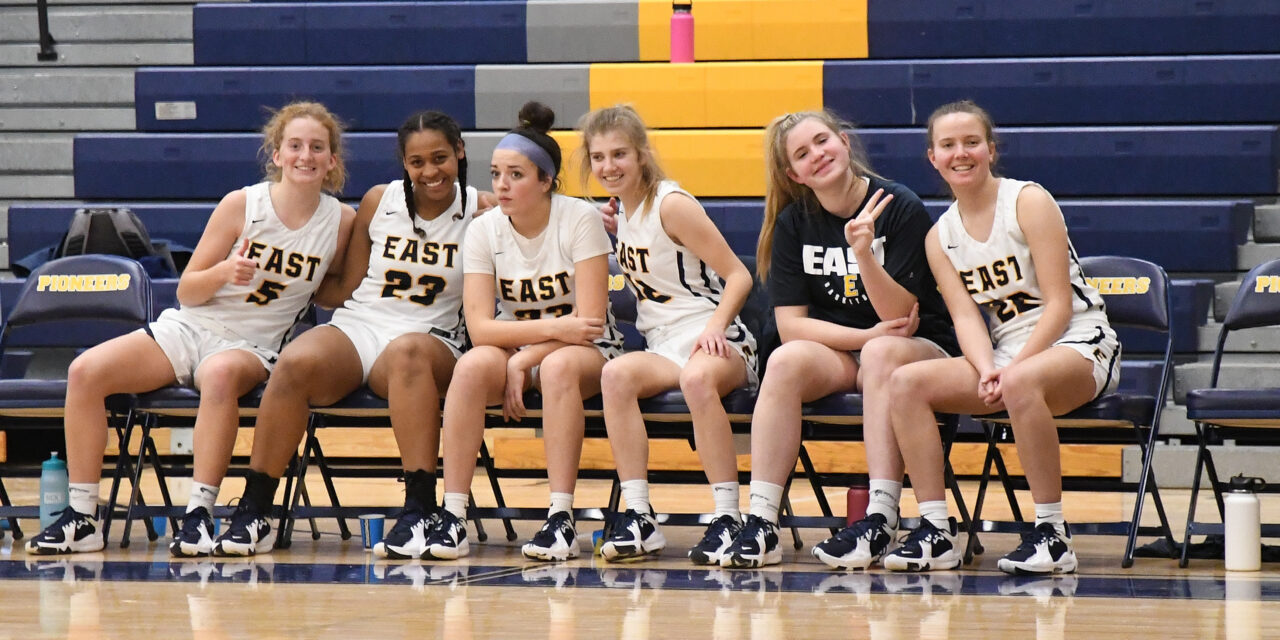 Big Rapids 61 Fremont 35: The Cardinals soared past the Packers in CSAA Gold action on Friday night. It was 15-6 BR after the first quarter, and 35-12 at the break. An explosive third frame allowed the Cardinals to take a 56-17 advantage into the final quarter. Big Rapids hit eight triples and 15/33 free throws in this game. Rylee Haist scored 25 points, including six three-pointers, in the win. Fremont was led by Jessica Bennett with 8 points and 5 steals.

Chippewa Hills 38 Tri-County 37: The Warriors escaped with a road victory, taking down Tri-County by a point. Shelby Fall led the way for CH with 13 points, while Kendra Ray and Madison Wrisley each had 9. The Vikings were led by Emmie McNees and her 18 points.

Newaygo 57 Central Montcalm 10: The Lions swatted the Hornets out of this game quickly, as the victors raced out to a 32-3 halftime advantage. Both Jaxi Long (21 points, 5 rebounds, 5 steals and 4 assists) and Emmerson Goodin (13 points, 9 rebounds, 6 steals) outscored CM’s entire team in this game. Isabella Welch added 8 points, 4 assists and 4 rebounds to the team’s tally. Newaygo is now 11-1 on the year and 6-0 in league play.

Muskegon Catholic Central 66 Manistee 52: The Crusaders defeated Manistee in Lakes 8 action on Friday. It was only 10-9 after the first quarter, but MCC scored 25 points in the second quarter to take a twenty point lead into the locker room. Katherine Rauch (15), Erin LaVigne (14) and Audrey Mey (11) led MCC in scoring.

Allendale 63 Fruitport 29: The Falcons defeated the Trojans on Friday in OK Blue play. Hannah Schroeder had 17 points for Allendale, while Abby Tew and Avery Jozwiak each had 7. Ashton Olson had 11 points for Fruitport.

West Catholic 72 Spring Lake 39: The Falcons brought the pressure against Spring Lake, securing a 21-point halftime edge. Spring Lake would win the third quarter, getting within twelve before a barrage of triples buried the Lakers’ hopes. Abbey Kimball had another phenomenal game with 35 points, while Reese Polega added 19. Spring Lake was led by Alexa Carter and Ella Andree, who both scored 8 points. Jennifer Judge and Nicole Schmitt each added 7 for the Lakers.

South Christian 52 Cedar Springs 22: The Sailors won convincingly over Cedar Springs. The highlight in this game was Sydney Vis, who passed the 1,000 career point mark on Friday evening.

Mona Shores 67 Wyoming 18: The Sailors improve to 11-2 overall and 6-1 in conference play with a victory over the Wolves. It was 19-4 Mona Shores after one quarter, and 41-9 at halftime. Olivia Sobczak (19) and Lily Miller (18) were in double digits for Mona Shores, while Jenna Tierman (8), Khaleeya Cook (6) and Ali Phillips (6) added key buckets. Avery Jirous paced Wyoming in defeat.

Zeeland West 33 Holland 29: The Dux trailed with less than a minute to play, but a surge delivered their victory. With twenty seconds to go, Marissa Ybarra hit a triple from the corner to push ZW ahead 31-29. She would add two free throws to ice the game with five seconds remaining. These were five of her 7 points. Lindy Gulker also finished with 7 for the Dux, while Kara Bartels tossed in 6.

Grand Haven 38 Jenison 28: The Bucs defeated the Wildcats in a defensive battle. A trio of Grand Haven girls all finished with 8 points. Terin Maynard (9) and Ella Haik (8) led Jenison offensively. The 10-3 second quarter was pivotal for Grand Haven’s pursuit of victory.

Hudsonville 67 West Ottawa 25: The Eagles secured their seventh OK Red win in as many tries, dominating West Ottawa on Friday. The Panthers meanwhile, have now lost two straight after their 10-0 season start. Maddie Petroelje and Jaci Tubergen each scored 17 for Hudsonville. Gabby Reynolds (10) and Molly Borski (8) led WO.

East Grand Rapids 67 Northview 34: The Pioneers won their fifth straight game, taking down the Wildcats. Macy Brown led the way with 24 points, while Reagan Weaver added 13. All nine Pioneers that dressed scored in this game. EGR has seen immense success as a program lately, as all three levels have swept the last five opponents.

Grand Rapids Christian 52 Forest Hills Northern 43: The Eagles held off the Huskies in a league battle on Friday evening. This game was knotted up at 34 after three quarters. GRC used seven of Zion Belcher-Arill’s 20 points in the final frame to power their way to victory. Katelyn LaRue (12) and Hannah Sall (8) had strong showings for GRC as well. Lila Fus (13) and Faith Walker (12) were in double figures for the Huskies.

Lowell 68 Greenville 34: The Red Arrows doubled up Greenville in OK White action on Friday evening. Braxcynn Baker had 26 points to pace Lowell, while Piper Risdon (12) and Lexi Howell (9) tossed in their share of offense. Alexus Dunn (17) and Meg Leslie (14) nearly scored all of Greenville’s points.

Gobles 68 Fennville 0: The Tigers cruised to a big victory over Fennville on Friday evening. Gobles scored 18, 26, 11, and 13 points in the four quarters respectively. Six different Tigers finished with at least 8 points.

Lawton 39 Constantine 27: The Blue Devils were hungry after a week away from the hardwood. They raced out to a 19-2 start in this victory over Constantine. Reese Olson led the way with 12 points and 14 rebounds. Sarah DeKoning (7), Adi Price (6) and Ella Richter (6) added to the scoring column for the victors.

Hart 60 Ravenna 21: The Pirates cruised past the Bulldogs on the road on Friday. It was 17-6 Hart after the first quarter, and 38-10 at halftime. It was a great team performance for the Pirates, as they assisted 20 of their 22 baskets. Addi Hovey led the way with 18 points, 5 rebounds and 5 steals. Abby Hicks (9 points, 4 rebounds), Mariana VanAgtmael (9 points, 5 assists, 4 rebounds, 4 steals), Aspen Boutell (8 points, 6 assists, 5 rebounds, 4 steals) and Morgan Marvin (8 points, 7 rebounds, 4 assists, 4 steals) had phenomenal performances for Hart.

Montague 50 Mason County Central 39: The Wildcats defeated the Spartans in WMC action on Thursday. Motivated by the birthday of their manager Henni, Montague stepped up to overcome the absence of Emma Dyer. Kendall Osborne led the way with 18 points, while Claire Meacham had 14 points and 7 rebounds. Brooke Stark had a big night as well, finishing with 7 points.

Oakridge 32 Shelby 27: The Eagles scored 10 points in the final frame to emerge victorious in this defensive battle. Molli Schultz led Shelby with 9 points.

Whitehall 53 North Muskegon 14: The Vikings defeated the Norsemen on Friday night, holding them to four points or fewer in each quarter. Charley Klint outscored NM on her own, finishing with 16 points, 9 rebounds and 5 steals. Ashley Tenbrink added 12 points, while Lola Buckner chipped in 6.

Edwardsburg 71 Three Rivers 29: The Eddies remain perfect at 13-0, as they dominated Three Rivers. Edwardsburg led 23-11 after a high scoring first quarter. They would hold Three Rivers to single digits in each of the final three quarters. Caitlin Tighe (12), Macey Laubach (12) and Katie Schaible (10) were in double digits for the victors, while Averie Markel added 8.

Mason County Eastern 41 Bear Lake 27: The Cardinals captured a WMD league victory on Thursday, as they raced past Bear Lake. Janessa Alvesteffer and Hillary Howe each had 10 for MCE, while Corinna Hernandez added 9. 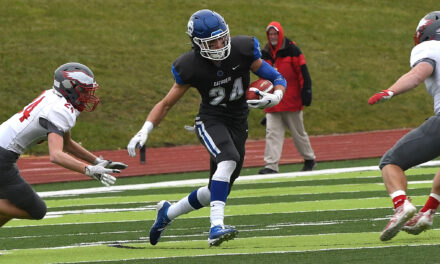