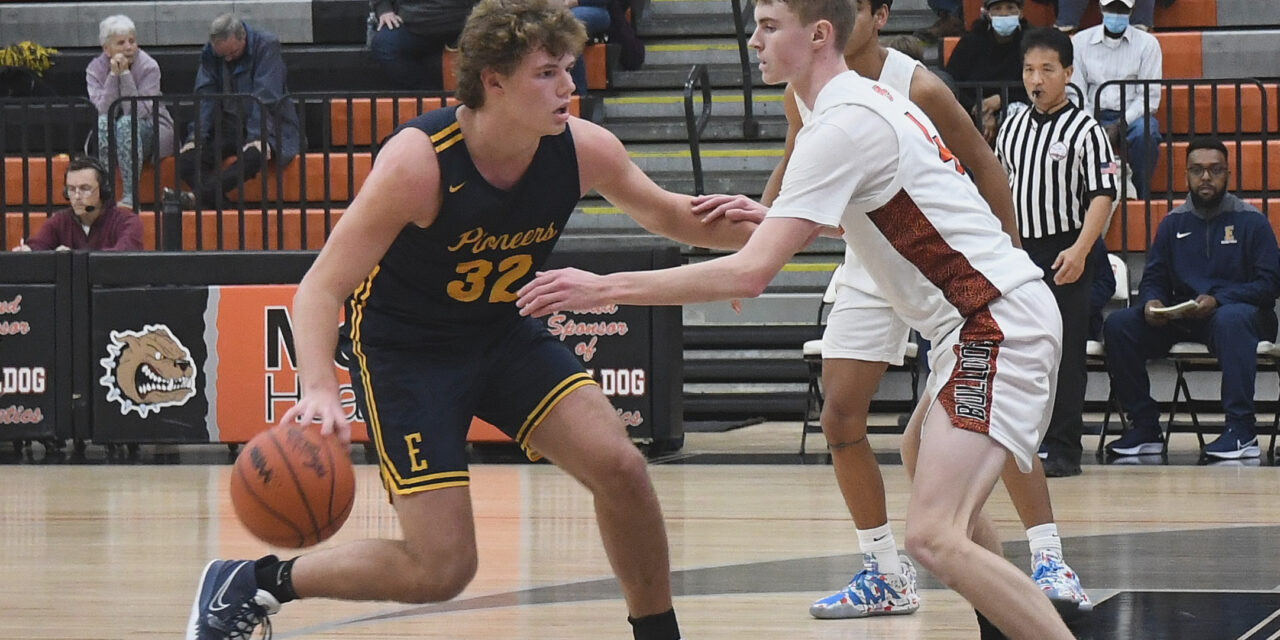 Conference play began in the OK Conference on Friday evening. A recap of those games, as well as many others, can be found below:

Big Rapids 60 Central Montcalm 51: A strong Cardinals team held off a CM unit that pushed BR to the edge. Fisher Hill (14), Mitch Herald (13) and Kaleb Crooks (12) were all in double figures for CM.

East Kentwood 61 West Ottawa 58: The Falcons were able to hold off West Ottawa to secure their first OK Red win of the year. Marshaun Flakes had 18 points, 6 assists and 5 steals to pace the victors, while Jevin West (12) and Jack Scrimshaw (10) joined him in double figures. West Ottawa saw another strong performance by Kobe Haglund with 18 points and 6 assists. John Beethan (11), Colin Shriver (10) and Reid Reimink (10) also finished with at least 10 for the Panthers.

Frankenmuth 72 Swan Valley 33: The Eagles more than doubled up their competition, dealing the Vikings a hefty loss. Drew Titsworth posted a double-double with 13 points, 10 rebounds and 4 steals. Nate Jackson also had a double-double with 12 points, 10 rebounds and 4 assists. Trent Ciesla was the top scorer for the ‘Muth, as he had 14. Travis Brenner chipped in 9 points, 4 rebounds, 4 steals and 4 assists. Drew Kackmeister led Swan Valley with 12 points.

Fremont 60 Newaygo 44: The Packers had little issue with Newaygo, creating a 22-2 edge in the opening frame. Logan Nelson had a great game for Fremont, scoring 13 points to go along with 5 assists and 4 steals. Blake Hanshue added 15 points, 9 rebounds and 2 steals.

GR Catholic Central 86 Forest Hills Eastern 36: The Cougars cruised to victory. In fact, the only thrilling chase was the battle of KK Brown and FHE’s entire team for scoring. At the end of the game, the two were deadlocked at 36 points.

GR Sacred Heart 62 West Michigan Lutheran 27: The Falcons improve to 7-0 with a Great Lakes 6 victory over WML. Sacred Heart was led by Noah Northon, who had 22 points and 7 rebounds. Peter Tober (11) and Jack Blouw (10) were also in double figures.

Holton 49 Lakeview 28: The Red Devils captured a CSAA-Silver victory over the Lakeview Wildcats. It was slow offense early, as it was just 9-5 Holton after the first quarter. Holton was able to extend their lead to 21 points after the third quarter, a margin they would hold over the final eight minutes. Wyatt Monette had a great game with 23 points, 13 rebounds, 6 blocks and 6 steals. Carter Brant added 10 points, 7 assists and 3 steals. Peyton Krantz paced Lakeview with 10 points.

Kalamazoo Christian 41 Lawton 38: It was a close game, but some last-minute scoring gave the Comets the victory. Both Chase Mitchell and Jake Rueff were in double figures with 12 points for the Blue Devils.

Kent City 72 Hesperia 18: The Eagles cruised to a victory in CSAA-Silver action. Kent City led 23-6 in the opening quarter, before adding a 21-6 second quarter. In the second half, the Eagles won 16-4 and 12-2 to coast to a big win. Jaret Jaramillo led the victors with 11 points. Maddox Mosley was the leading scorer for Hesperia with 12.

Mona Shores 58 Union 46: It was an intense OK Green battle between the two programs, but in the end, the Sailors secured a 12-point win. Parker Swartz paced Mona Shores with 26 points and 8 rebounds. Keontae Richard (9 points) and Ethan Krueger (8) also had strong offensive days.

North Muskegon 53 Montague 48: The Norsemen took down the Wildcats in WMC action, issuing Montague their second loss in league play. Montague led 12-11 after the first quarter, and 20-18 at halftime. A strong third quarter pushed North Muskegon ahead by a point. Montague rallied to force overtime. In the extra frame, Troy McManus hit a couple baskets to propel the Norsemen to victory. He finished with 18 points and 10 rebounds. James Young (10), Champ Young (8) and Brandon Rypstra (7) also had strong offensive performances. Owen Raeth (15) and Rodney Brassfield (10) paced Montague.

Ravenna 58 Oakridge 50: The Bulldogs narrowly defeated the Eagles in conference play. Oakridge led 12-9 after the first quarter, before a 34-13 advantage in the middle two quarters gave Ravenna an edge. Kyle Beebe led Ravenna with 20 points, 7 rebounds and 4 steals. Clay Schullo added 17 points and 8 rebounds. Travis May was also in double figures with 14 points.

Reeths-Puffer 59 Wyoming 51: The Rockets earned a win in their first OK Green game of the year. They led 13-9 after eight minutes, before Wyoming secured a 27-26 halftime lead. The Wolves pushed their lead out to six after the third quarter, before RP outscored Wyoming 25-11 in the fourth quarter. Jaxson Whitaker (19 points, 6 assists), Logan Brooks (15 points) and Travis Ambrose (11 points, 13 rebounds and 8 blocks) paced RP on both ends. Wyoming saw a great game by Quadir Hatchet (13 points) and Ramere Draper (10).

Rockford 66 Caledonia 53: The Rams are now 1-0 in OK Red play with the win over the Fighting Scots. Caledonia led 12-11 after the first quarter, and 30-28 at halftime. The Fighting Scots were outscored 20-7 in the third quarter, costing them a chance at victory. Jack Lamancusa (19), Caden Pokorzynski (15) and Kyle Varady (10) were all in double figures. Nic Bender (14), Nick Henry (12) and Nick Fox (12) topped the Caledonia scoring column.

South Christian 66 Middleville 26: The Sailors had little trouble against the Trojans in their OK Gold opener. Jake DeHaan paced South Christian with 14 points, while Caden Oetman chipped in 13. Terrell Jefferson was the leading scorer for Middleville with 10.

Sparta 59 Hopkins 58: It was a thrilling OK Silver opener between the Spartans and Vikings. Hopkins led at the end of the first three quarters, but it was Sparta that would secure the victory. A late foul call with .5 seconds to go sent Sparta to the free-throw line, where they hit a pair of charity stripe shots to secure the victory. Tristen Perry paced Hopkins with 20 points, while Josh Tew added 10.

Whitehall 80 Hart 70: The Vikings bested the Pirates in WMC action on Friday. Hart led 17-15 after the first quarter, and by six points at halftime. Whitehall outscored Hart 19-8 in the third quarter to take the lead. The Vikings then went 12/13 from the charity stripe in the fourth quarter, sealing the victory. Parker Hovey had 27 points for Hart, while Diego Escamilla added 22. Whitehall was led by Cam Thompson, who had 27 points, 13 rebounds and 6 assists in his second varsity game. Isaac Dehart (16 points) hit four key triples, while Jack Houtteman was consistent with 15 points and 4 rebounds. Brodie Fogus tossed in 7 points and 10 rebounds.