The Hopkins Vikings and Belding Black Knights both hoped to secure playoff berths in Week 9. Both teams had some cushion, but a win would go a long way, especially for Hopkins. The Vikings were able to secure a win, 38-22, all but clinching their trip to the postseason.

Hopkins scored the only touchdown in the first quarter, as Jayden Prather ran six yards for the score. Zander Hitzler added the two-point conversion, giving the Vikings an 8-0 lead.

Early in the second quarter, Belding got on the scoreboard. A high snap on a punt sailed into the end zone, and the Black Knights pounced on it for a score. They elected to kick the extra point, moving within a point. On the ensuing kickoff return, Trent Baugh fielded the football and raced 90 yards for a score. Another Hitzler conversion extended the lead back to nine points.

Anthony Szubinski responded for the Black Knights with a 66-yard quarterback keeper, pulling Belding back within two points. Shortly before the half, Jayden Prather returned to the end zone, this time on a 3-yard carry that gave Hopkins a 22-14 lead going into the locker room.

In the third quarter, both teams scored once. Miles Gibson tossed a score for Hopkins, while the Black Knights elected to run for an 8-yard touchdown. Both teams made two-point conversion as well. This left the score at 30-22 with twelve minutes to go. Jayden Prather rounded out the scoring with a 1-yard plunge, his third of the game. Trent Baugh added a two-point conversion run.

Jayden Prather rushed for 116 yards on 26 carries. Zander Hitzler added 93 yards for the Vikings. Hopkins and Belding now sit at 5-4 after this game, and they both expect to be selected during Sunday’s selection show in Division 5. 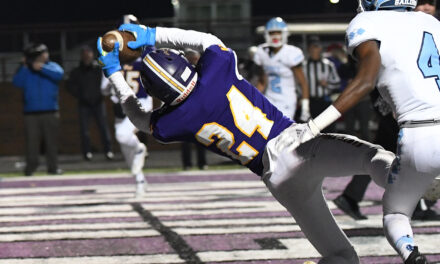