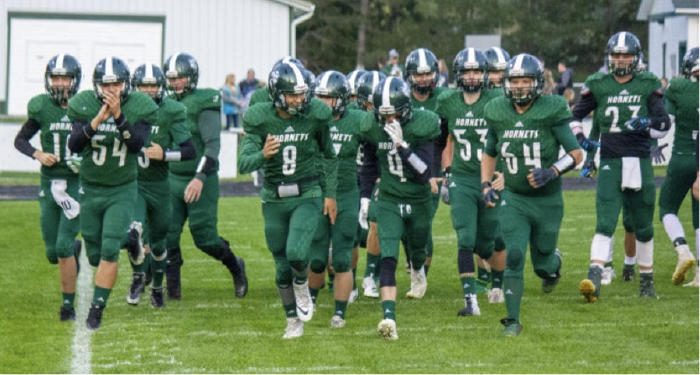 The Central Montcalm Hornets and Grant Tigers battled in the CSAA Gold finale for both teams. It was an exciting battle, as a late touchdown and interception helped the Hornets earn a 25-21 victory.

In the first quarter, Central Montcalm raced out to a commanding lead. Isaac Johnson got things rolling with a 25-yard touchdown run three minutes into the action. On the ensuing defensive drive, Steven Dennis stepped in front of a pass. Dennis rumbled down the field for a 45-yard touchdown. On the final play of the frame, Isaac Johnson scored again, as his 11-yard carry gave Central Montcalm an 18-0 lead.

Grant would score the lone second quarter touchdown on an 11-yard pass to Cotter Scholtens. In the third quarter, the Tigers continued to score. Nathan Lang was open, and Brady Jacobs hit him on a 14-yard scoring play. With nineteen seconds left in the frame, Jacobs used his legs for a 50-yard sprint. This gave Grant a 21-18 lead.

The early stages of the fourth quarter saw little offense, but with a minute to play, Central Montcalm jumped in front. Mitch Herald powered his way across the goal line from five yards out, giving the Hornets a 4-point lead. Grant would have a chance to score again, but Fisher Hill sealed the Central Montcalm victory with an interception.

Central Montcalm is now 5-3 on the year. They will wrap up 2021 with a battle against Ravenna. Grant, now 3-5, will face Kent City in their season finale.