The Britton Deerfield Patriots captured another victory, moving their record to 6-0 on the season. In a non-league game, they dominated Webberville 68-0.

Britton Deerfield started the scoring with a 30-point first quarter. Nico Johnson found Clayton Hauser on a 35-yard pass just twenty-two seconds into the action. Three minutes later, Johnson found Mason Mueller on a 70-yard deep ball, doubling the lead. The third touchdown pass of the frame saw Johnson and Tristan Johnson connect on a 46-yard toss. Nico Johnson rounded out the scoring with a 64-yard sprint on a quarterback keeper.

The offensive onslaught continued in the second quarter, as Nico Johnson found Noah McRobert for a 67-yard touchdown strike. Nico Johnson used his legs for a 15-yard keeper to give the Patriots a 46-0 lead. Nico Johnson would score twice more, returning a punt 74 yards and finding Clayton Hauser for a 16-yard touchdown. This gave Britton Deerfield a 62-0 lead at halftime.

In the fourth quarter, Britton Deerfield scored their final touchdown. The only scoring play of the second half saw Nick Lacy power across the goal line from 3 yards out.

With the win, Britton Deerfield remains unbeaten. Next week, they conclude Tri-River play against Maple Valley. The victory would give the Patriots an outright conference championship in the inaugural year of the league. Webberville, now 1-5 on the season, will return to CMFL play for their regular season finale against Portland St. Patrick. 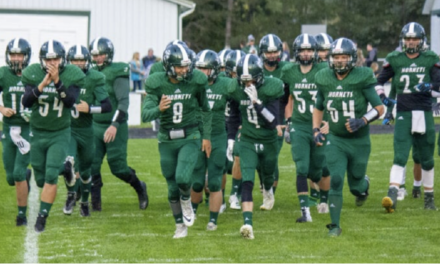 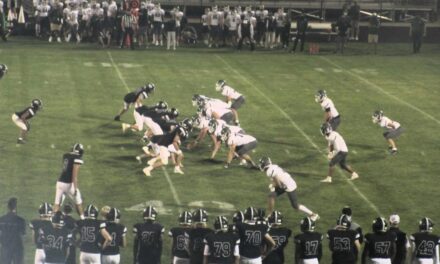