Lakeshore started the game with a trip to the red zone, but their field goal attempt was missed, leaving the scoreless draw. Portage Northern would break the draw with a three-yard touchdown run by XaVior Tyus. This gave the Huskies a 7-0 lead.

The Lancers’ offense awoke in the second quarter with a pair of scores. Cage Davison powered across the goal line from a yard out, capping off a 65-yard touchdown march. Davison would score the second touchdown as well, hauling in a 22-yard touchdown pass from Ryan Korfmacher. This gave Lakeshore a 14-7 halftime lead.

Cane Mack evened the score with a short one-yard touchdown run midway through the third quarter. Lakeshore would respond with another pass from Korfmacher to Davison. It was a fast scoring drive that covered seventy yards in three plays. As the quarter entered its final minute, XaVior Tyus returned to the end zone. He sprinted through the Lancers’ defense on a 64-yard touchdown. Cane Mack and Jake Kavanaugh connected on a two-point try that evened the score at 21.

Early in the fourth quarter, the Huskies’ took the lead. Jayden Myers reeled off a 44-yard touchdown run, and Avery Kucharski added an extra point. They would hold this lead until the final minute, where the theatrics ensued.

Ryan Korfmacher dialed up a passing touchdown, a 25-yard toss to Cage Davison. This capped off an incredible 18-play, 85-yard touchdown drive by Lakeshore. Alex Wojahn booted an extra point to tie the game.

It took the Huskies only 26 seconds to regain the lead for good. After starting on their own thirty-one, they gained ten yards in two plays. On the third play of the drive, they handed the ball off to Jayden Myers, who sprinted down the field and into the end zone for the game-winner.

Next week, Portage Northern (1-3) will take on Mattawan. Stevensville Lakeshore (3-1) will square off against Kalamazoo Central. 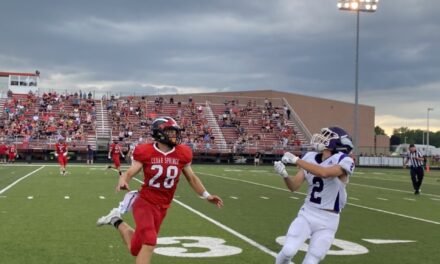