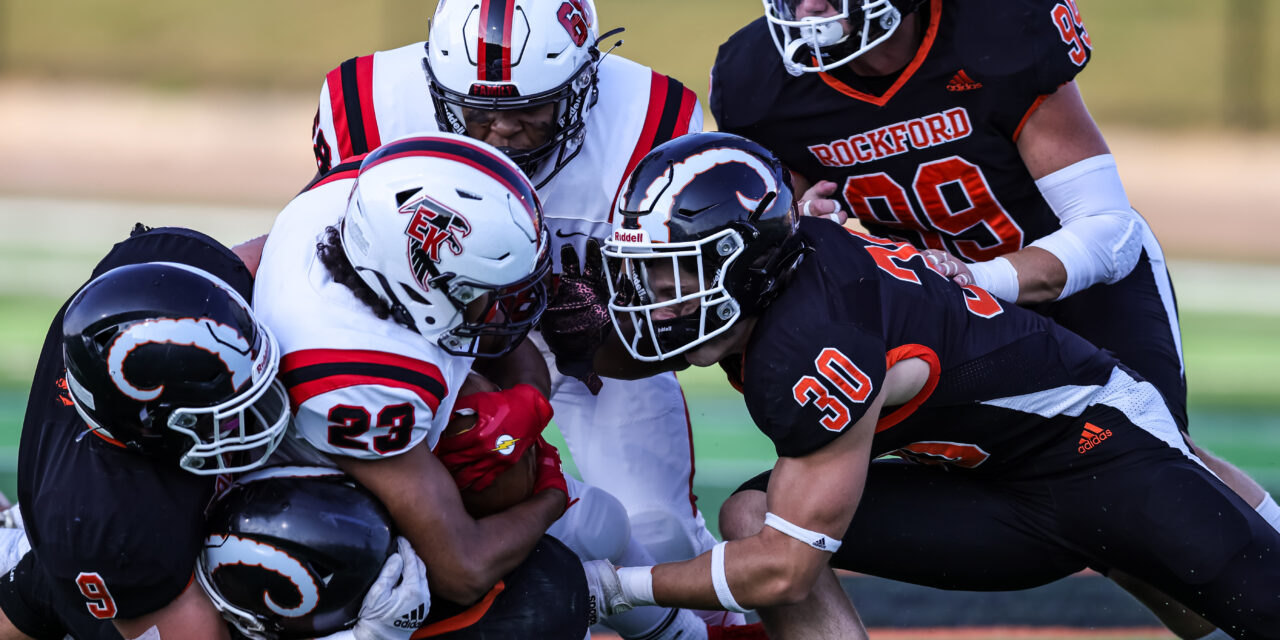 Check out pictures of the game here: https://milespostema.smugmug.com/Rockford-Sports/2021-09-10-Rockford-vs-East-Kentwood/

It was no secret that East Kentwood had struggled in their first two games of the 2021 football season. The third contest proved to be even less hospitable to the Falcons as Rockford cruised to a 48-0 victory at Carlson-Munger Stadium in Rockford on Friday, September 10. Rockford managed to overcome a somewhat uneven effort in the first half offensively that found them leading only 14-0 at the break. The second half was a different story as the Rams scored early and often on their way to 34 points and to the institution of the running clock in the final quarter. The margin of victory was the largest in the series since a 53-7 Rockford win in 2010. The triumph moved the Ram’s record to 3-0 on the season and extended their all-time lead in the hotly contested series to 28-26. East Kentwood dropped to 0-3.

“I don’t think we really came out unfocused or looking ahead,” said Rockford Coach Brent Cummings. “It can appear that way when you have a few turnovers, but I was very impressed by the defensive effort for the entire game and the way we came out and overcame our early mistakes to really play excellent offensively in the second half. The coaches had a great game plan for both sides of the ball and it was great to witness how it all came together.”

The effort of the Ram defense was reflected in looking at the final stat lines. The Rams held East Kentwood to 47 total yards for the game and an incredible total of -7 yards rushing for the contest. The Falcons were also forced to punt a rarely seen total of 11 times over the game’s duration. Toss in the added bonus of a Lucas Guerra fumble recovery for the game’s final touchdown and the scope of the defensive domination is apparent. The Rams were led by Andrew Griffin and Jack Lamancusa with 6 tackles apiece while Luke Vanderwiel and Rick Beison chipped in with 5 each.

Rockford had three turnovers for the game that included a fumble inside the Falcon 5 and a muffed punt that negated what would have been excellent field position for the Rams late in the first half. The muffed punt was the deepest point of the field reached by the Falcon offense. They took over at the Ram 49 after the recovery and netted exactly two yards before being forced to punt yet again three plays later.

The first half touchdowns for the Rams came on a pair of scintillating runs from senior quarterback Zak Ahern. The first was a 53-yard jaunt up the right sideline that saw Ahern do a nice job of setting up his blockers and the Ram receivers do an even better job of downfield blocking. Jackson Burkholder added the PAT and it was 7-0 Rockford with 1:55 left in the opening quarter. Burkholder would finish 6 of 7 on extra points with his only miss being just wide to the right side on the third Rockford touchdown. The second Ahern marker was a quarterback draw that saw the speedy senior sprint untouched over the left side to make it 14-0 with 8:55 left in the first half. The fumble and muffed punt combined to keep the Rams off the board for the duration of the opening half and the teams headed to their respective locker rooms with Rockford holding a 14-0 lead.

“Zak is an extremely patient runner,” said Cummings. “It seems as if he is produces electric runs nearly every game. He makes decisive cuts and has great speed that he combines with the ability to make defenders miss on a regular basis.”

Rockford scored on every second half possession save for an interception on the first play of one of the drives. The first TD was again scored by Ahern as he used a fake to the dive back before keeping and scoring from five yards out to make it 20-0 with 8:02 remaining in the third quarter. The next score was set up by a 42-yard punt return from Alex McLean. McLean appeared to be allowing a bouncing punt to settle in Ram territory before deftly scooping the ball up and sprinting down the right sideline and being forced out at the Falcon 30. Ryan Ahern did the honors for Rockford on the next trip to the end zone. The sophomore halfback broke multiple tackles and kept his feet churning to score from four yards out and make it a 27-0 game with 3:03 left in the third quarter.

Zak Ahern completed a quick 13-yard slant to junior slot receiver Mac VandenHout for the final Ram touchdown of the third quarter. VandenHout reeled the pass in on the five before squirming and twisting his way into the end zone on a great effort after initial contact. That made it a 34-0 Ram lead with 1:12 left in the third quarter and signaled the entrance of the Ram reserves for the balance of the game. But the offense never skipped a beat in finishing out the resounding win.

VandenHout doubles as the number two quarterback for the Rams and showed all in attendance that he is also a force to be reckoned with in that role. Facing a third and 19 from the Falcon 30, VandenHout scrambled out of the pocket and broke a pair of tackles before cutting back late to widen the Ram advantage to 41-0 with 9:34 remaining in the game and setting in motion the running clock. Guerra’s end zone fumble recovery on the next play from scrimmage for EK ended the scoring for the night at 48-0 Rockford.

Zak Ahern was 14 of 20 passing for 102 yards and a touchdown plus an interception. VandenHout was 1-2 for 13 yards in relief for the Rams. Zak Ahern led the Ram rushing attack with 11 carries for 121 yards and three touchdowns. Gabe Spees added 48 yards on six attempts while Ryan Ahern had nine carries for 46 yards and a TD as well. The receiving corps was led by McLean with five catches for 23 yards while Vandenhout had three grabs for 33 yards and a touchdown and Tyler Vroman chipped in with a trio of receptions for 24 yards.

Rockford will make their initial foray onto the road next week after opening the season with three consecutive home games. The opponent will be the second consecutive bitter rival for Rockford as they venture to Grandville to take on the 1-2 Bulldogs. Kickoff is slated for 7:00 P.M. on Friday, September 17.

Spring Lake Delivers a Statement Victory over the Chix 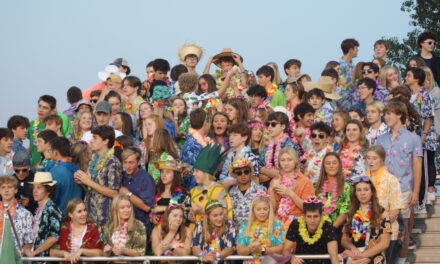