The Britton Deerfield Patriots and Northpointe Christian Mustangs met on Friday in a battle of 1-0 teams in the inaugural season of the Tri-River Conference. A hot start helped the Patriots improve to 2-0 in league play, capturing a 38-12 victory.

Just forty-six seconds into the game, Britton Deerfield found the end zone. Nicolas Johnson found an open receiver in Mason Mueller, who was able to run 22 yards for the opening score. Johnson used his legs for a two-point conversion, lifting the Patriots ahead 8-0.

Northpointe Christian would respond with a short touchdown run by Tristan Pranger to pull within two points. From that point, the Patriots would score thirty unanswered points to seize control of the contest. Nicolas Johnson used his legs for the first two scores, breaking off 33 and 69-yard runs to the end zone. He also completed one conversion pass to Tristan Johnson. In the final minute of the first half, Nicolas Johnson found Mason Mueller again, this time for a 25-yard touchdown, giving BD a 30-6 lead heading into the locker room.

After a scoreless third quarter, the Patriots would score again to start the second half, as Nick Wayne ran for a 3-yard touchdown with 7:30 left in the ball game. Northpointe would muster together one final touchdown drive, as Bill DeLano reeled off a 16-yard touchdown, but the Mustangs were too far behind to threaten the Patriots.

Tristan Pranger led NPC with 120 rushing yards on 26 carries, and he also completed one pass for 32 yards. Gibson Adema caught that ball for the Mustangs. Eric Braam had 8 carries that resulted in 65 yards. 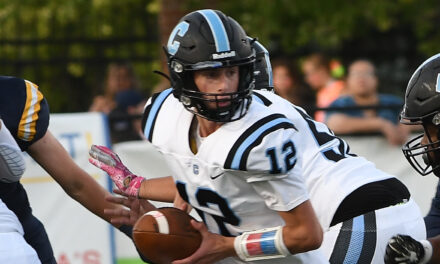